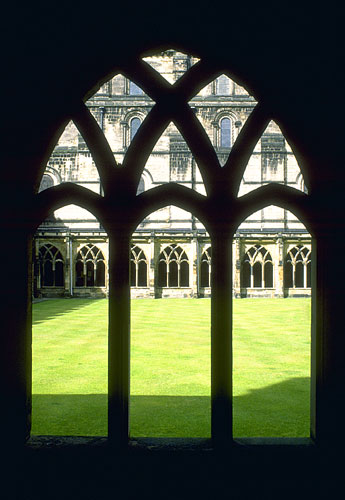 
The cities of Durham and York were home to two of northern England's greatest pilgrimage cathedrals during the medieval era. Durham housed the relics of Cuthbert, Aidan, and Oswald. York had those of five "saints": Paulinus, Wilfred, Chad, John of Beverly, and William. Most of these persons led lives of questionable sanctity and were canonized by the church primarily for political reasons. Cuthbert however, seems to have been a truly saintly individual. Becoming a monk while still a young boy, Cuthbert (635-687) lived in various monasteries and was then transferred to the Holy Island of Lindisfarne. Legends are told of his gentle nature and his wondrous ability to calm wild birds and animals. It is said that late in the evening, after the other monks had gone to sleep, he would often go on long walks whilst in ecstatic communion with god. Birds would perch upon his shoulders and, as he stood in the sea to pray, all manner of small and large fish gathered at his feet. After twelve years at Lindisfarne, Cuthbert felt drawn to the life of a solitary ascetic and so retired to the small windswept island of Farne where he stayed for nine years. Later recalled to Lindisfarne by the King to become Bishop of the monastery, Cuthbert led his final two years teaching and ministering to the pilgrims who came to receive his blessings. He died in 687 and was buried on Lindisfarne.

For nearly two hundred years the relics of Cuthbert remained on the island until they came to be transferred to Durham by a most interesting series of events. The monks of Lindisfarne, fleeing repeated Viking attacks, had abandoned their holy island in 875, taking with them the relics of St. Oswald and St. Aidan packed into the coffin containing St. Cuthbert's uncorrupted body. For over 100 years the monks wandered, settling here and there, and founding churches dedicated to St. Cuthbert. In 995, fearing another attack from Danish raiders, the monks again fled with their precious relics. According to legend, when the monks approached the town of Durham the saint's coffin began to grow heavy and one of the monks had a dream in which Cuthbert said his body would finally rest at 'Dunholme'. None of the monks knew of such a place but, inquiring of local villagers, overheard two women speaking about a lost cow which was said to have strayed into 'the Dunholme'. Investigated by the monks, this turned out to be a wooded promontory in a loop above the River Wear, which is where Durham cathedral now stands.

Except for a short period when Cuthbert's body was returned to Lindisfarne Island, his sacred relics have remained in Durham to this day. The great cathedral, considered by authorities to be the finest example of Norman architecture, was begun in 1093 and completed forty years later. During late medieval times, St. Cuthbert's shrine was the second most visited pilgrimage site in all of England, exceeded only by the shrine of Thomas Becket at Canterbury. Many miracles of healing have occurred at the shrine of Cuthbert and these are often explained as resulting from the power of the saint's relics. On numerous occasions over the centuries, Cuthbert's coffin has been opened and the body inspected. When last viewed in 1899, over 1200 years after the saint had died, the body was observed to be entirely uncorrupted. Science has thus far offered no explanation to account for this phenomenon, even though the non-corruption, or non-decay of saintly persons' bodies has been observed throughout the world in all the major religious traditions. Furthermore, it is interesting to note that the sacred sites that enshrine uncorrupted bodies of saints are very often places where miracles of healing are reported. 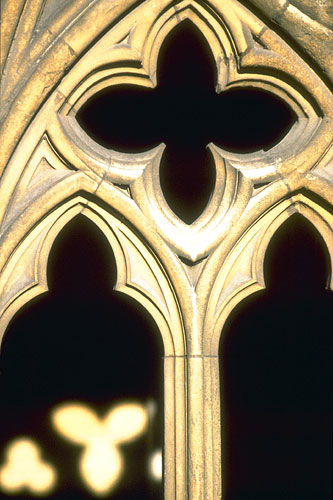