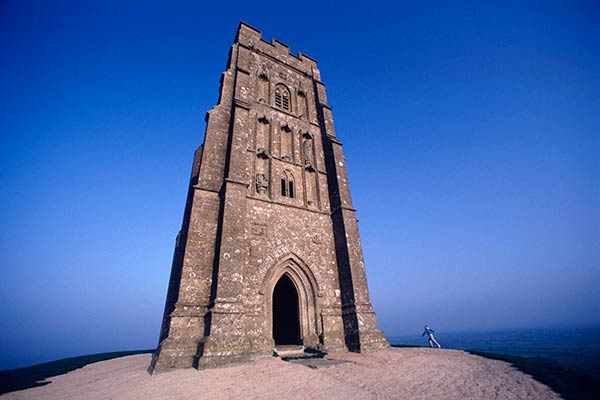 My first visit to Glastonbury was in the late summer of 1986. I had been bicycling for a year throughout western and Mediterranean Europe in search of stone circles, holy wells of the Earth goddess, and Gothic cathedrals. All the while I had felt a powerful yearning to visit the region and village of Glastonbury. It felt as if the place was mysteriously exerting a magnetic attraction upon both my mind and heart. The closer I came, the more my dreams and imaginations were filled with images of dragons, fairy kingdoms, and Arthurian legends. Upon reaching England, I hastened southwest toward the region of Somerset. Nearing Glastonbury, cycling through emerald green valleys shrouded in fog, it seemed I was entering a magical kingdom. Miles ahead in the distance the great hill known as the Tor loomed high above the ethereal mists and all the world below. It appeared, as it had been long ago, an island jutting skyward from an inland sea.

The earliest knowledge we have of the Tor come to us from legends. In prehistoric times the island peak was believed to be the home of Gwyn ap Nudd, the Lord of the spirit world of Annwn. Immortalized in folklore, Gwyn ap Nudd became a Fairy King and his realm of Annwn the mystic isle and sacred mount of Avalon. Long a holy place of pagan spirituality, the 170 meter tall hill shows extensive signs of being contoured by human hands in Neolithic times. These contours, indistinct after the passage of thousands of years, mark the course of a spiraling labyrinth, which encircles the hill from base to peak. Ancient myths and folk legends suggest that pilgrims to the sacred island would moor their boats upon the shore and, entering the great landscape labyrinth, begin their long ascent to the hilltop shrine. By following the intricate and winding route of the labyrinth, rather than ascending by a more direct line, a deep attunement with the Tor's concentrated terrestrial and celestial energies was achieved.

Archaeologists are prone to dismiss such legends as nothing but fanciful myths of preliterate people. A wealth of studies, however, by folklorists, dowsers and other earth mystery researchers suggest that these mythic images may in fact be the dim memories of long forgotten realities. In the mid 1960's, for example, the brilliant scholar of English antiquities, John Michell, found evidence of an alignment of Neolithic sacred sites in the Glastonbury region. The Tor was linked with such venerable ancient holy places as Avebury stone rings and St.Michael's Mount. More recent research by Hamish Miller and Paul Broadhurst, featured in their book The Sun and the Serpent, has revealed this enigmatic alignment runs all across southern England linking hundreds of Neolithic, Celtic and early Christian sacred places.

Miller and Broadhurst have brought to light other matters of great importance. Laboriously dowsing the entire alignment over a period of years, they discovered there are actually two distinct lines of energy - roughly parallel to one another - flowing for nearly 300 miles. Because of the large number of St.Michael and St.Mary churches situated upon the lines, these energy pathways have been dubbed the St.Michael and St.Mary lines. While the lines are of far greater antiquity than Christianity, it is not entirely inappropriate to have given them such Christian names. St.Michael, or more properly the Archangel Michael, is traditionally regarded as an angel of light, the revealer of mysteries and the guide to the other world. Each of these qualities are in fact attributes of other earlier divinities that Michael supplanted. Frequently shown spearing dragons, St.Michael is widely recognized by scholars of mythology to be the Christian successor to pagan gods such as the Egyptian Thoth, the Greek Hermes, the Roman Mercury and the Celtic Bel. Mercury and Hermes were considered guardians of the elemental powers of the earth spirit, whose mysterious forces were sometimes represented by serpents and linear currents of dragon energy. Along these dragon lines were highly charged power places - the serpent's dens and dragon's lairs of prehistoric myths - whose locations archaic geomancers had marked with spear-like standing stones, cave temples, and hilltop sanctuaries. Thousands of years later, as Christianity began its relentless spread through pagan Europe, St.Michael shrines were placed at these sites and the dragon-slaying Archangel became a symbol of the Christian suppression of the old religions.

As Miller and Broadhurst continued their dowsing research, following the Michael and Mary energy lines to and up the sides of the Tor, they made a remarkable discovery. The two lines appeared to mirror the ancient landscape labyrinth as it winds its serpentine way to the summit. Even more astonishing, the two lines move in a sort of harmony with one another and, at the very peak, interpenetrate as if they are ritually mating. The female, yin or Mary energy line encloses the masculine, yang or Michael energy in the form of a double-lipped cup. It is a most evocative image. The configuration of the Mary energy line, containing the phallus-like mediaeval tower of St.Michael, seems to portray a chalice or grail and is thus a potent symbol of the alchemical fusion of universal opposites.

Descending the Tor, the Michael and Mary lines pass precisely through other key sites in Glastonbury's sacred geography. Primary among these are the Chalice Well, Glastonbury Abbey, and Wearyall Hill. A study of the myths and legends of these places will reveal more associations with that mystical vessel, the Holy Grail. The story is fascinating. According to old Cornish legends, Christ's uncle, Joseph of Arimathaea, was a tin merchant who traded with miners on Britain's western coasts. On one of his trading journeys he brought along his nephew, the boy Jesus, and together they made a pilgrimage to the Holy Isle of Avalon. Years later, following the Crucifixion, Joseph returned to Avalon and moored his boat on Wearyall Hill. There he planted his staff in the ground, where it took root and blossomed into the Holy Thorn whose descendant is still growing on the hill today. On the site below this hill Joseph built a small church, believed to be first Christian foundation in Britain. From the Holy Land Joseph had brought the cup used at the Last Supper, which held the blood of Christ that dripped from the Cross. This most sacred of objects, the Holy Grail, is said to have been buried with the body of Joseph on Chalice Hill, which lies between the Tor and the site of Abbey.

Near the center of Glastonbury town stand the ruins of the old Abbey, once the greatest monastery of medieval Europe. In the heart of the Abbey, a St.Mary Chapel marks the exact site where Joseph set his original church. Analysis of the ground plan of the St.Mary chapel reveals proportions of sacred geometry equal to those found at nearby Stonehenge, and a ley line running through the axis of the Abbey runs straight to that famous stone ring, indicating a connection between the two holy places in deep antiquity. During the Christian era large numbers of pilgrims flocked to the Abbey to venerate the relics of saints and sages, some of the most valued relics being those of St.Patrick who ended his days at Glastonbury in 461 AD (Patrick, the much loved ‘saint’ of Ireland is not actually Irish but was born in England and later captured by Irish pirates and sold into slavery there). In 1539 the Abbey was closed by order of King Henry VIII and the great monastery fell into ruins. Before the closure of the Abbey, monks hid the vast wealth of relics, manuscripts, and other treasures within tunnels and caverns beneath Glastonbury Tor. Legends say these hidden treasures will one day be revealed, ushering an age of peace and enlightenment into the world.

The Glastonbury region and its Abbey also have strong associations with Arthurian legends and the quest for the Holy Grail. In 1190 AD, following a fire which destroyed much of the Abbey, the dramatic discovery was made of two ancient oak coffins buried sixteen feet beneath the ground. Contained within the coffins were the bones of a large man and a woman, and an inscribed cross identifying the bodies as those of King Arthur, whose traditional burial place was Avalon, and Queen Guinevere. Centuries old texts in the Abbey library describe the adventures of King Arthur and his knights between Avalon and nearby Cadbury Castle, where stood Arthur's court of Camelot. More recent research has lent further credibility to the ancient association of Glastonbury with Arthurian legend. In 1929 an artist, Kathryn Maltwood, discovered evidence of a group of enormous earth figures molded on the landscape across ten miles of Somerset. These figures, delineated by natural features of the earth and further contoured by human design, have been interpreted as scenes from Arthurian legends based on astrological patterns. While it is now known that the figures long predate the historical period of King Arthur (500 AD), their presence hints at archaic wisdom teachings encoded in the very hills and valleys of mother earth.

One of the most intriguing of Glastonbury's mysteries are the strange balls of colored lights occasionally seen spiraling around the Tor. In 1970, a local police officer reported seeing eight egg-shaped objects "dark maroon in color, hovering in formation over the hill" and in 1980 a witness saw "several green and mauve lights hovering around the tower, some smaller than others, about the size of beach balls and footballs. One hovered outside the east facing window". This author spent one summer night sleeping within the tower and, waking from a dream of castles and magical beings, found the interior of the tower radiantly aglow with a luminous white light. Glastonbury, the mystic isle of Avalon is truly an enchanted place. A sacred site since time immemorial, it is often forgotten but always rediscovered. Today a major haven for pilgrims and spiritual seekers, Glastonbury is a power place of potent transformational energies. 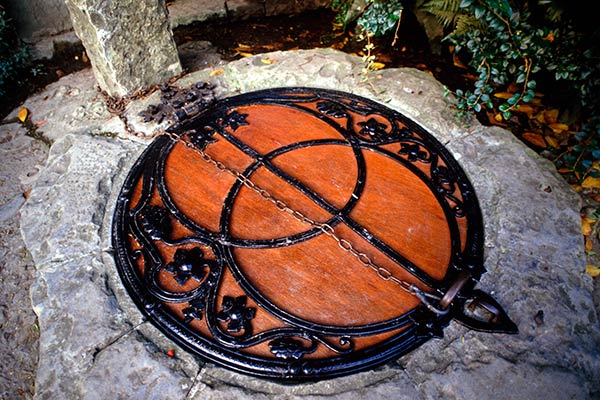 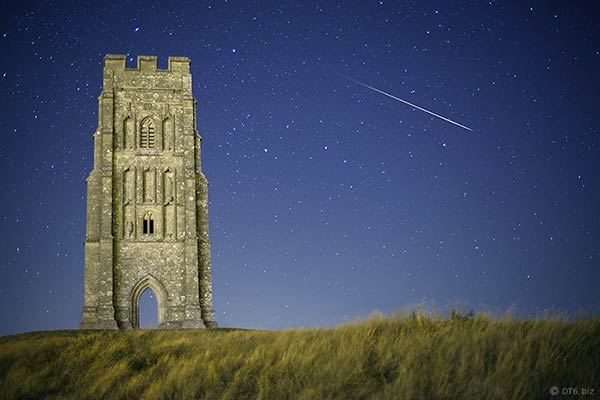 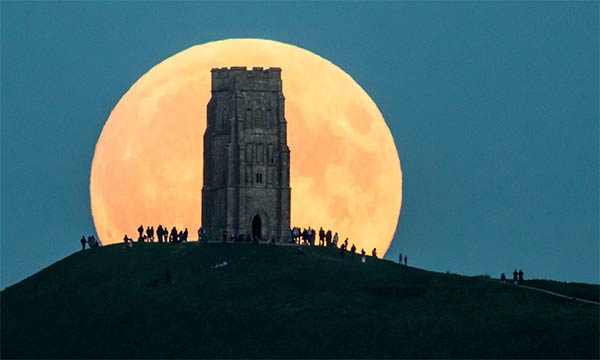 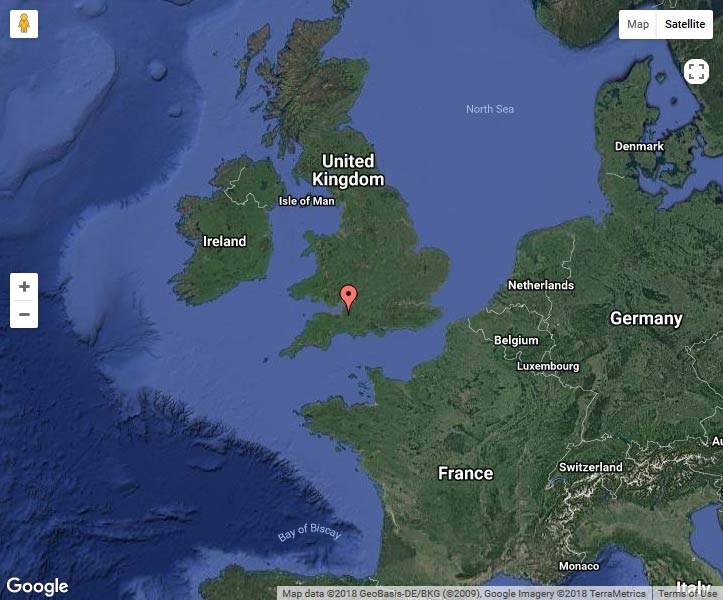