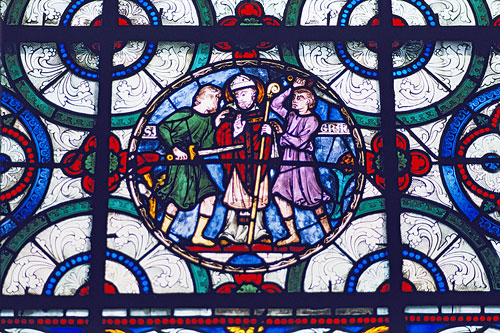 
The most famous of England's pilgrimage shrines during the late medieval ages, Canterbury Cathedral marks a sacred site that has been continuously utilized since long before the Roman's arrival in 43 AD. A Celtic church was established in Canterbury during the Roman occupation but, following the departure of the Roman legions in the 5th century and the reconquest of the region by Jutes and Saxons, Christianity was displaced by the old pagan religions. Sent by Pope Gregory to eradicate this paganism, St. Augustine came to Canterbury in 597 AD and soon thereafter established the cathedral that has remained the primary ecclesiastical administrative center of England. A succession of cathedrals has stood upon the site of the original Augustine construction. Destroyed by fires and Danish raiders, these cathedrals enshrined an impressive collection of relics, which stimulated Christian pilgrimages from the 7th century onwards.

Canterbury's importance as a major European pilgrimage destination however, really began after the martyrdom of Thomas Becket on December 29, 1170. Becket, the archbishop of Canterbury and the most powerful religious figure in England, had angered Henry II, the King of England. In response to the king's question, "Who will rid me of this turbulent priest", four knights entered Canterbury cathedral and slew Becket with swords. While Becket was certainly no saint (he is known to have been an arrogant, greedy and manipulative opportunist), his martyrdom gave rise to England's greatest pilgrimage tradition. The reasons for this may be found in the unjust circumstance of his murder, the coincidental occurrence of some miracles of healing immediately following the murder, the penance done at the shrine by Henry II four years later, and the wide spread medieval belief in the spiritual powers emanating from the relics of saints and martyrs.

For more than three hundred years Canterbury attracted great numbers of pilgrims from throughout England and Europe, and many hundreds of miracles of healing were recorded at the shrine of Thomas Becket. Catering to the needs of these pilgrims became the principal industry of the town, and a fine picture of the pilgrimage era is given in The Canterbury Tales by Geoffrey Chaucer (written 1394-1400). Pilgrimages to Canterbury, and most other English shrines, waned in the mid 16th century after Henry VIII dissolved the monasteries and confiscated their properties. A measure of the immense popularity of the Canterbury pilgrimage is evident from the fact that twenty-six wagons were required to haul away the confiscated gold, jewels and other treasures that had been donated to the shrine. It is said that a forest of crutches left by cripples whom had been miraculously healed also surrounded the shrine.