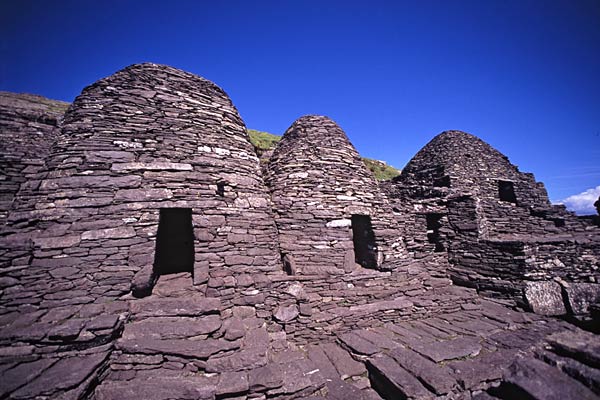 
Eight miles from Ballinskelligs Bay off the tip of Iveragh Peninsula is situated the island of Skellig Michael, one of the most enigmatic and remote sacred sites of all Europe. A fascinating matter about Skellig Michael is that it is the westernmost sacred site along a long line of ancient pilgrimage places running from western Ireland through France, Italy and Greece, and then onto Mt. Carmel in the Palestine. This line, sometimes called the Apollo/St. Michael axis was known thousands of years before the advent of Christianity and linked the venerated holy places of St. Michael’s Mount, Mont St Michel, Bourges, Perugia, Monte Gargano, Delphi, Athens and Delos.

Legendary accounts of Skellig indicate its importance in pagan times. The mythical early invaders of Ireland, the Tuatha de Danaan, tell of Milesius whose son Irr was buried on Skellig around 1400 BC. Another legend speaks of Daire Domhain, a ‘king of the world’, who stayed on the island. Little is known about the origins of the Celtic monastic settlement. Local lore associates it with St. Fionan, the Kerry saint, while other sources suggest that the first monks could have been Copts fleeing Roman and Byzantine persecution in the 6th century. The first known historical reference to the island comes from the end of the 5th century when the King of Munster, pursued by the King of Cashel, fled to Skellig. Another early mention of Skellig is found in the Annals of Innisfallen from 823 AD, which says: “Skellig was plundered by the heathen and Eitgal (the abbot) was carried off and he died of hunger on their hands.” From the early 9th century the Vikings repeatedly pillaged the monastery, killing many of its inhabitants. The monks endured, however, and legends tell that in 993 AD, the Viking Olav Trygvasson, who later became the king of Norway and introduced Christianity to that country, was baptized by a hermit on Skellig Michael. The site was finally abandoned sometime in the 13th century and many of the monks moved to the monastery of Ballinskelligs on the mainland.

The small cluster of six ‘beehive’ huts, two oratories and small terraces are located 714 feet above sea level, after a steep climb of 600 stone steps. Facing southward and sheltered from the winds, the site was favored by hermits and monks wanting to live far remote from normal life. While the slate rock huts appear to be round from the outside, their insides are rectangular with walls curving inward to form a corbelled roof and there are shelves and sleeping platforms built into the walls. Terraces around the huts and oratories were used to grow vegetables, which along with fish from the ocean and bird’s eggs were the main food supply of the monks. There are three wells on the islet, whose area is only 44 acres. At a rocky crag higher up on the south peak of Skellig, called the ‘Needle’s Eye’, is another oratory, inaccessible today, that was favored as a pilgrimage destination even after the monks left in the 13th century.

It is interesting to reflect on the identity of St. Michael, the patron saint of Skellig. St. Michael, almost always shown killing a ‘dragon’ with a sword, is the Christian saint that carried the souls of the worthy to heaven. Scholars have commented on the similarity between the Celtic notion of the ‘Isles of the Blessed’ where the spirits of deceased persons journeyed to the otherworld and Skellig’s later dedication to St. Michael. In this regard it is important to mention that a 13th century German source claims that Skellig was the final location of the battle between St. Patrick and the venomous snakes and devils that plagued Ireland. With the aid of St. Michael, the ‘dragon slayer’ (dragons equal snakes in ancient mythologies), we have a clear indication of old folk memories about the suppression of the pagan ways by the new religion of Christianity. 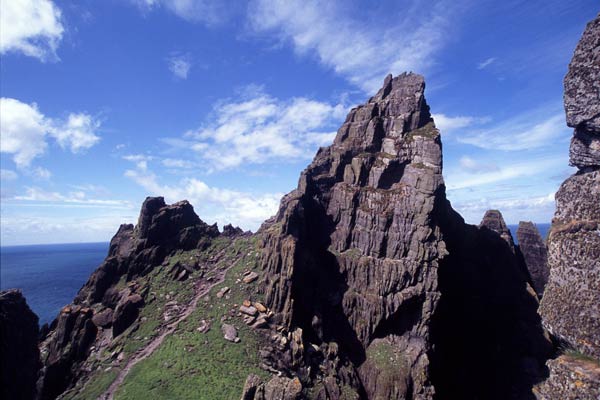 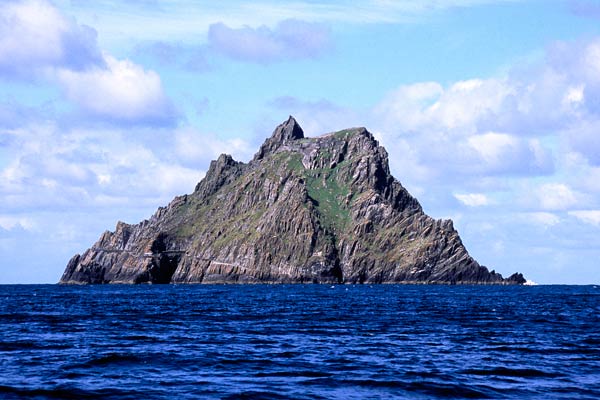 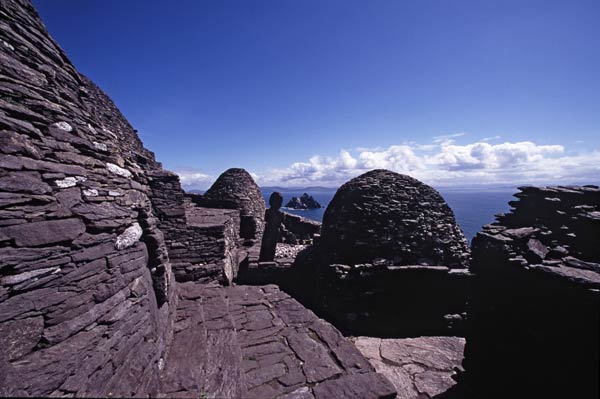