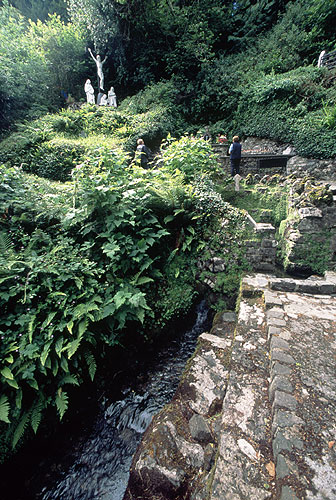 Known to be a sacred place of the Celts, this grove and its holy well were later taken over by St. Patrick and re-dedicated to Christianity. The well of lovely cold, clear water bubbles up at the foot of a steep, rock wall and flows towards Loch Gill in the distance. Near the center of the grove of trees which surrounds the well and just below the well itself, there is a healing stone with a depression at one end where you can lean your back for a cure of back pain. On top of this stone are four indentations, said to have been left by St. Patrick, and if you rest your fingers there some of the saint’s powers are transferred to you. The Christian Pattern day (pattern indicating the primary day of pilgrimage visitation) is the final Sunday in July each year. Just off the shore of Loch Gill there is an island called Inishmore which contains the ruins of an ancient church. 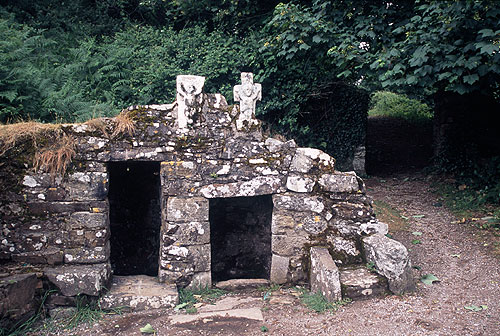 St. Declan’s Well flows near the town of Ardmore in county Waterford, on the east side of town above the bay. The well was a place of healing in pagan times and people would bathe injured limbs in the waters of the spring. St. Declan founded the monastery at Ardmore before the time of St. Patrick and he is sometimes looked upon as the father of Christianity in Ireland. St. Declan’s Day is July 24. The monastery of Ardmore has one of the most beautiful round towers in all of Ireland.

For more detailed information on the Holy Wells of Ireland, consult the following sources: