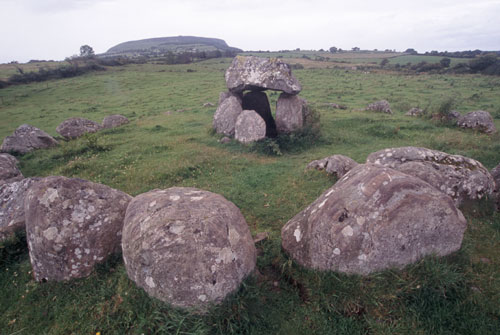 
Situated in county Sligo on a low-lying gravel ridge and ringed by mountains, Carrowmore is the largest, and possibly the oldest, megalithic complex in Ireland. Having an area of more than 1.5 square miles, it is filled with stone rings, dolmens and passage cairns. Evidence has been found of a Mesolithic presence at Carrowmore around 7500 BC and the Swedish archaeologist Goran Burenholt has suggested that one of the structures, known as 52A, may be as old as 5400 BC. The site presently has more than 30 passage cairns and another 25 are known to have been destroyed since the early 1800’s by workers seeking quarry stones and treasure hunters. Archaeologists excavating within the passage cairns have found pins made of antler or bone, small balls of bone or chalk, worked flint and chert, decorated bone fragments and a rock crystal pendant.