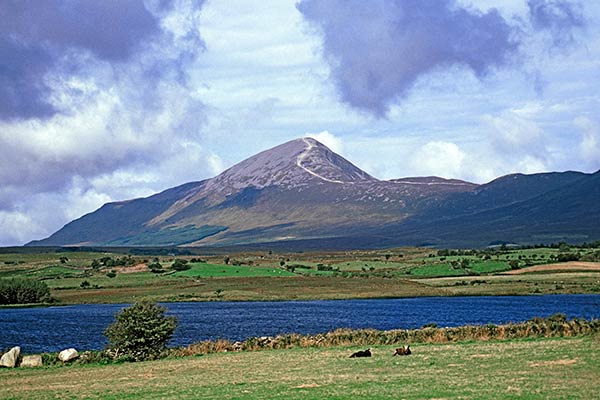 
Rising to 2510 feet (765 meters) near the town of Westport in County Mayo, the quartzite peak of Croach Patrick was a pagan sacred place long before the arrival of Christianity. For the Celtic peoples of Ireland it was the dwelling place of the deity Crom Dubh and the principal site of the harvest festival of Lughnasa, traditionally held around August 1 (until the mid-nineteenth century only women were allowed on the summit during this pilgrimage and childless women would sleep on the summit during Lughnasa eve in the hope of encouraging fertility). According to popular Christian stories, St. Patrick visited the sacred mountain during the festival time in AD 441 and spent forty days and forty nights banishing dragons, snakes, and demonic forces from the site. Were there dragons and demonic forces actually living atop this mountain, or does the legend have a metaphorical rather than a literal meaning? To shed light on this matter it is important to know something of the person known as St. Patrick, the patron saint of Ireland.

Patrick is not actually Irish. He was born in Britain around AD 385. Captured in his youth by Irish pirates raiding the Scottish coast, he was sold into slavery in Ireland. Later escaping to Europe, Patrick spent some years studying at the monastery of St. Martin of Tours in France, where he was ordained as a priest. Deeply affected by the Christian missionary zeal so prevalent in the early fifth century, he decided to return to Ireland to undertake the conversion of the Celtic pagans and their Druid priests. Arriving in Ireland in AD 432, Patrick spent nearly thirty years traveling about the countryside, bringing Christianity to the local people and establishing churches and monastic foundations upon many Druidic sacred sites, which had themselves been established upon far more ancient megalithic sites of the Grooved Ware people. Patrick later retired to Glastonbury, England, where he died at the age of 111.

It was common for early Christians to view pagan religious practices as devil worship; thus the legend of Patrick slaying dragons and demonic forces on the sacred mountain is actually a metaphor for his subjugation and conversion of the pagan priests. In support of the pre-Christian sanctity of the mountain it is important to note that Neolithic foundations have been found on the summit and, on a natural rock outcrop (known as ‘St. Patrick’s Chair) along the pilgrimage route to the summit, Neolithic art has been discovered. By the seventh century the holy mountain had become one of the two most important Christian pilgrimage sites in all Ireland (the other being Station Island, also called St. Patrick's Purgatory, in Lough Derg near the town of Sligo). Prior to AD 1113 the pilgrims came to the mountain during Lent, but following a wild storm in which thirty pilgrims died upon the peak, the pilgrimage period was changed to summer, with the most popular days being the last Friday and Sunday of July.

Currently it is estimated that nearly one million pilgrims climb to the summit each year, as many as forty thousand on the last Sunday in July. In the Irish Christian tradition the ascent is undertaken as an act of penance for wrongdoing, and many of the pilgrims climb barefooted or even on their knees. The ancient worship at Mt. Croach Patrick, however, had nothing to do with matters of penance and supposed wrongdoing. The holy mountain was a sanctuary for the giving of thanks and the celebration of life's abundance. Similar to what occurred at many other prehistoric sacred places across Europe, at Croach Patrick Christianity has warped, stifled and corrupted the natural human tendency to venerate life and the Earth's beauty, while imposing ideas of fear, guilt, and control. This great sacred mountain certainly does not wallow in such limiting, life-denying concepts nor does it require or support humans in doing so. Mt. Croach Patrick was - and still is - a place to experience and give thanks for the exquisite beauty of life.