The Round Towers of Ireland 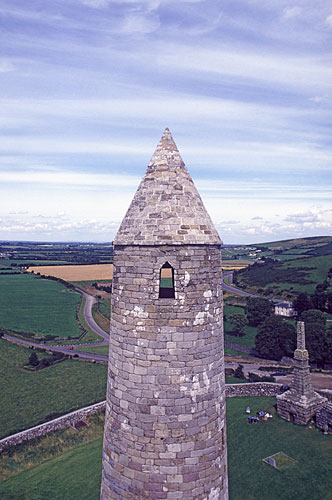 Round Tower of Cashel


Scattered with a seeming randomness across the rolling hills of Ireland are the remains of sixty-five round towers. Soaring as high as 34 meters above the ground, the towers are in remarkably fine condition considering the antiquity of their construction. When exactly the towers were constructed is unknown. Scholars have suggested that the most probable construction period was between the 7th and 10th centuries AD, and this hypothesis is based on the fact that nearly every tower is at the site of a known Celtic church dating from the 5th to 12th centuries. Initially each of the towers were freestanding structures but in later times other buildings, primarily churches and monastic foundations, were constructed around some of the towers.

Thirteen towers retain a conical cap and it is assumed that all the other towers once had similar caps that have fallen over the centuries. On a small number of towers battlements have been built on to the top but it is known that these battlements were added at a later date in the Middle Ages. The principles used in construction of the towers is always the same: two walls of block and mortar construction are built a few feet from one another and the space between is filled in with a core of rock rubble. This was a standard method of wall construction utilized by the Romans. Scholars believe that Christian missionaries learned the technique in England or continental Europe and then brought the building technology to Ireland, incorporating it in the building of the massive round towers.

Writing of the dimensions of the towers in his book, Irish Round Towers, Lennox Barrow states: "It is remarkable how little the main dimensions vary. In the great majority of towers the circumference at the base lies between 14 meters and 17 meters and the thickness of the wall at the lowest point at which it can be measured varies from 0.9 meters to 1.4 meters. Doorways, windows, storey heights and diameters also follow clearly defined patterns, and we may well conclude that most of the towers were the work of teams of builders who moved from one monastery to another using standard designs." Barrow goes onto say that: "Most doorways are raised1.5 meters to 4.5 meters above the ground.This is usually explained as being for security, to enable the monks to take refuge inside the towers during times when Viking raiders or bandits were attacking the monasteries. There is probably some truth in this theory but t is possible that the stability of the tower had as much to do with the door heights. The higher you could build before making an opening in the wall the stronger the base would be. Very often the towers were filled in, even as high as the doorways."

This idea that the round towers were erected and used primarily as watch towers and places of protection is strongly debated by an American scientist, Philip Callahan. Writing in his book, Ancient Mysteries, Modern Visions, Callahan discusses research which indicates that the round towers may have been designed, constructed and utilized as huge resonant systems for collecting and storing meter-long wavelengths of magnetic and electromagnetic energy coming from the earth and skies. Based on fascinating studies of the forms of insect antenna and their capacity to resonate to micrometer-long electromagnetic waves, Professor Callahan suggests that the Irish round towers (and similarly shaped religious structures throughout the ancient world) were human-made antenna which collected subtle magnetic radiation from the sun and passed it on to monks meditating in the tower and plants growing around the tower's base. The round towers were able to function in this way because of their form and also because of their materials of construction. Of the sixty-five towers, twenty-five were built of limestone, thirteen of iron-rich, red sandstone, and the rest of basalt, clay slate or granite - all of these being minerals which have paramagnetic properties and can thus act as magnetic antenna and energy conductors. Callahan further states that the mysterious fact of various towers being filled with rubble for portions of their interiors was not random but rather may have been a method of "tuning" the tower antenna so that it more precisely resonated with various cosmic frequencies.

Equally intriguing, Callahan shows that the seemingly random geographical arrangement of the round towers throughout the Irish countryside actually mirrors the positions of the stars in the northern sky during the time of winter solstice. Archaeological excavations at the bases of the towers have revealed that many towers were erected upon the tops of much older graves and it is known that many of the tower sites were considered sacred places long before the arrival of Christianity in Ireland. These facts compel us to wonder if the ancient Irish, like the Egyptians, the Mayans and many other archaic cultures understood there to be an energetic resonance between specific terrestrial locations and different celestial bodies. This certainly seems to be the case. All across the Irish countryside particular locations were chosen, precisely designed structures were erected to gather and store various energies, and a tradition of humans' spiritual use of the sites arose over the millennia. While many of the round towers are now crumbling and therefore their antenna function may no longer be operative, a field of holiness still permeates the sites today.

In another article (The Mysterious Round Towers of Ireland: Low Energy Radio in Nature; The Explorer's Journal; Summer, 1993) Callahan gives further details of his discoveries:

"Most books will tell you that the towers were places of refuge for the monks to hide from Vikings raiding Ireland. They were, no doubt, bell towers and lookouts for approaching raiders, but the speculations that monks escaped raiders, who no doubt knew how to smoke bees out of hives or climb the 9 to 15 feet to the door, borders on the ludicrous. Round towers are perfectly designed to be totally useless for hiding people or church treasures.....Another strange thing about the towers is the dirt that fills the base below the high doors. Each door has a different level of dirt filling the base as if they were "tuned" like a pipe organ....I had long postulated that the towers were powerful amplifiers of radio resonance from the atmosphere generated by lightning flashes around the world.....The round towers proved to be powerful amplifiers in the alpha brain wave region, 2 to 24 Hz, in the electrical anesthesia region, 1000 to 3000 Hz, and the electronic induction heating region, 5000 Hz to 1000 KHz....It is fascinating that just above the surface of the ground to about 2 to 4 feet up there is a null of atmospheric frequencies that get stronger and stronger until at 9 to 15 feet above the surface they are extremely strong. The Irish monks were well aware of this for that is where they built their high doors. At every tower we measured there was a direct correlation between tower door height and the strongest waves.....That the highly amplified waves occur in the meditative and electrical anesthesia portion of the electromagnetic spectrum is of utmost significance. In 1963, G. Walter researched brain EEG waves from 0.5 to 3 Hz (Delta region) and found anti-infectious effects. There is an elegant but short list of research projects demonstrating the beneficial effects of low ELF wavelengths on sick people."

Round tower of Cashel

Jutting high above the plain of Tipperary against the backdrop of the Galteemountains is the 28 meter round tower of Cashel. While the tower dates from the 11th century, the rock outcrop upon which it stands has fortifications from the early 4th century when itwas the stronghold and ceremonial center of a powerful clan. Patrickis said to have visited the site in450 AD and hence one of its popular names, St. Patrick's Rock.

Round Tower of Glendalough

The tower of Glendalough is considered by scholars to be the most finely constructed and beautiful tower in all Ireland. Situated in the cleft of a steep and thickly forested valley, the 30 meter tall tower is built of mica schist with a granite doorway. Glendalough was an ancient gathering place of pre-Christian hermits and the first Christian monastery was established by St. Kevin who lived in the enchanted valley from 498-618 AD. Clustered about the base of the tower are remains of a 1200 year old cathedral and the first functioning university in the western world. Nearby the tower is the healing cross of St. Kevin. A local legend states that if one encircles the cross with one's arms and makes a wish concerned with healing, that wish will be fulfilled according to the depth of one's love of God. 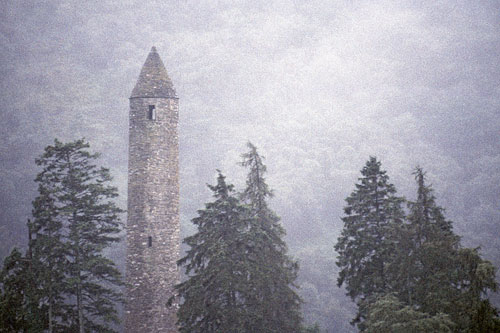 Round Tower of Glendalough, Ireland 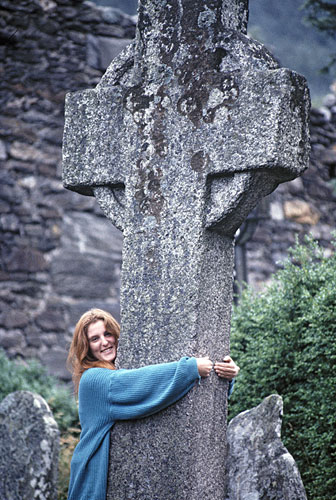 Round Tower of Kilmacduagh

Kilmacduagh, north of Limerick in county Galway, is the tallest of the Irish towers at 34 meters and, while quite stable, appears to be tilting precariously. Little is known of the adjoining monastery, probably founded in the early 7th century, and it is assumed that the round tower was erected sometime in the 10th or 11th centuries. 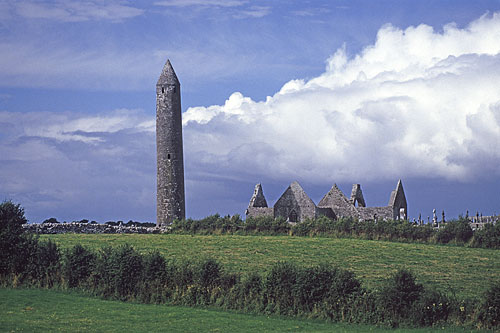 Round Tower and monastery of Kilmacduagh, Ireland 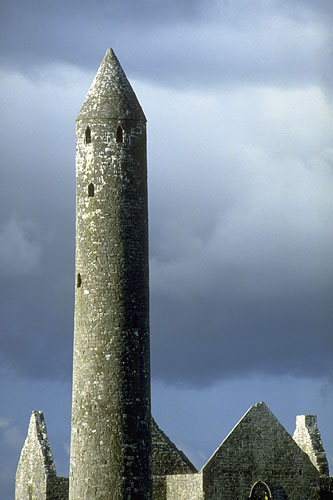 Detail of Round Tower of Kilmacduagh, Ireland 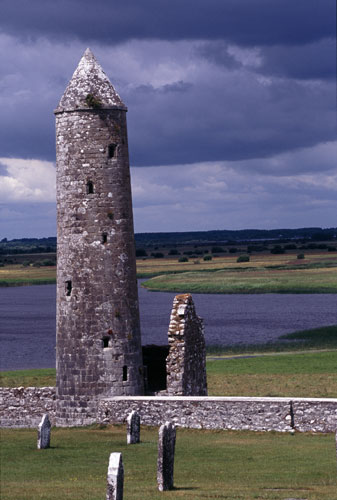 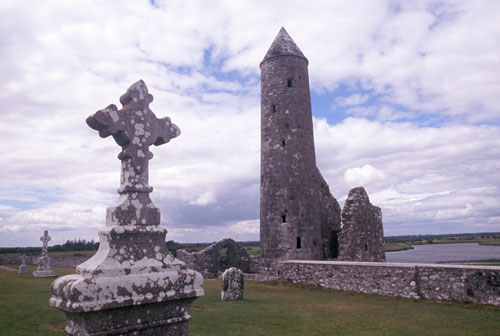 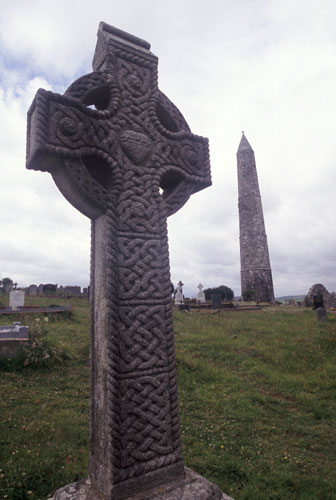 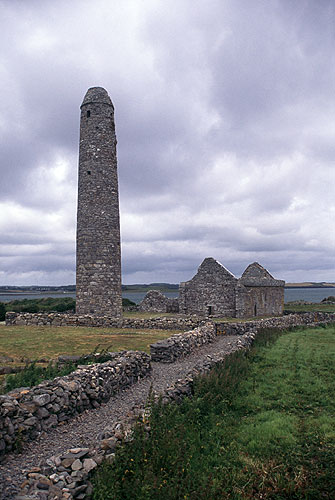