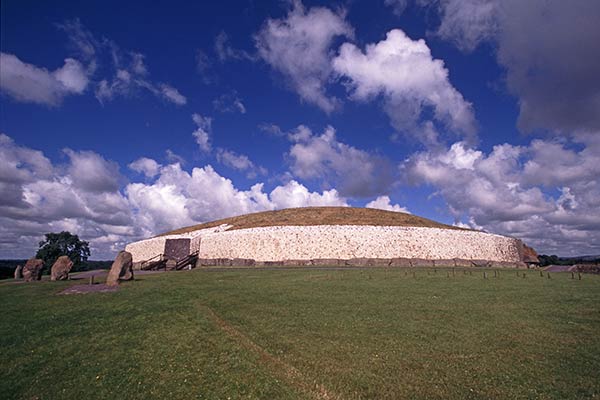 Along the Boyne River north of Dublin stands the Brugh na Boinne or the ‘Palace of the Boyne’, containing 26 extraordinary structures of which Newgrange, Knowth and Dowth are the most significant. Newgrange is named after the local townland of Newgrange, so-called when the area was part of the Cistercian abbey of Mellifont in the 12th century. Newgrange has been dated to approximately 3700 BC, was in decay by 2500 BC, and seems to have been empty since 861 AD when it was last plundered by the Vikings. Legends recount that the area of these mounds were thought to be the home of Oengus, the son of Dagda, and became known as Brug Oengus (the Mansion of Oengus). The whole area was called Bru na Boinne or the Mansions of the Boyne. According to another Celtic legend, the Dagda and his son Oengus were two of the principal members of the Tuatha de Danann, which placed the mounds under the protection of fairies. In 1699, the owner of the land, Charles Campbell discovered the decorated stone at the entrance of Newgrange and became probably the first person to enter the cairn in a thousand years. Recognizing the importance of the structure, he stopped quarrying its stones and the massive cairn remained open until archaeological excavations began in 1962.

The Newgrange passage cairn covers an acre of land and consists of a mound, sometimes called a tumulus, rising from the meadow and surrounded by a stone curbing. The cairn is 280 feet across and 50 feet high, and of the original 38 pillar stones surrounding the cairn, only 12 remain. The bulk of the cairn is constructed of approximately 280,000 tons of river rolled granite stones brought 75 miles from Dundalk Bay, and covered with a layer of soil which is several yards deep. The facing around the perimeter of the cairn is several yards high and is made of sparkling white quartz quarried 50 miles away in the Wicklow Mountains. The entrance to the cairn is marked by a threshold stone which is elaborately carved with spirals and diamond shapes. Inside the cairn, a 62-foot (24 meter) passage way leads to a domed chamber that is 20 feet high. This chamber has a corbelled roof and three recesses, one straight ahead and one on either side, giving it a cruciform shape. Many of the stones within these chambers are carved with beautiful spirals, geometric figures and wavy lines.

Above the main entrance to the cairn are two lintel stones and between them an opening, called a ‘light box’. It is through this light box that a beam of sunlight, on a particular sequence of days, is able to enter the long chamber. A fascinating fact is that the 62-foot passage way rises 6.5 feet along its length resulting in the chamber floor being level with the roof box. One of the primary aims of those forms of megalithic architecture which functioned as celestial observatories was to reduce the light in the interior of the passage chamber. The darker the chamber, the more brilliant the narrow shaft of light would appear to be. Furthermore, the accuracy of such devices to precisely observe the sun increases in proportion to their size. Unless the construct is of an extremely large size, such as is found at Newgrange, the varying positions of the light beam will be almost undetectable during the twenty-two day period of the solstice.

Just before 9 AM on the morning of the winter solstice, December 21, the Newgrange passage is pierced by a shaft of sunlight which illuminates a stone basin at the end of the passage and lights up a series of intricate spiral carvings in the rock. The chamber is brilliantly lit for around 17 minutes and this solar display lasts for five days around the time of the solstice. Archaeoastronomers studying the various cairns at Newgrange, Knowth and Dowth have determined that the sunbeam on the solstice is accurately observed throughout the day by the different cairns. Furthermore, standing stones and cairns in close proximity to the Newgrange tumulus create sight-lines which clearly indicate that the ancient builders were also precisely aware of other astronomically significant periods such as the equinoxes, the cross-quarter days, and both major and minor lunar standstills. Even more fascinating, the scholars Christopher Knight and Robert Lomas have conclusively demonstrated that the precise alignment and engineering of the light box also indicated one day –occurring only every eight years – when the light of Venus enters the passage exactly 24 minutes before the light of the solstice sun.

The passage cairn of Newgrange (and others such as Knowth, Dowth and Loughcrew) has often been compared to a womb, as a womb inside a great mound of earth may be likened to that of an earth goddess. This notion is given support by the fact that very few burial remains have been found within any of the large cairns of Ireland. Instead, the objects that have been found all seem to have a fertility function, for example oval shaped stones and rock phalluses. Some carved bone pins and pendants have been recovered from the cairns and scholars suggest that these may been left by young women in hopes of impregnation by the gods. The few bones found with the cairns, always without rich burial remains, may be an indication that the ancient people hoped the sun’s rays would touch the bones and somehow allow the spirit to reincarnate.

Readers with have noticed from the above notes that I specifically do NOT label the passage cairns of Newgrange, Knowth or Dowth as burial tombs. There is an archaeologically sound reason for this. During the period of some 40 generations which the Megalithic people (also called the Grooved Ware People because of the distinctive style of their pottery) constructed these massive mounds, there would have been many deaths from natural causes. Scholars, such as Professor Kelly, one of the main excavators of the mounds, have calculated that as many as 48,000 people would have died during this period of 40 generations. If this is so, then the question remains: where were they all buried and why are there so very few burial remains within the passage cairns? Did the Grooved Ware People venerate only a small percentage of their dead (some 0.4%) or were the tremendous passage cairns constructed for a purpose other than the simple burial of the dead?

Perhaps we are given some further insight into the meaning and power of this magnificent place by this ancient tale from the Tuatha da Danann:

Aengus was an externally youthful exponent of love and beauty. Like his father, he had a harp, but it was of gold not oak, as the Dagda’s was and so sweet was its music that no one could hear and not follow it. His kisses became birds which hovered invisibly over young men and maidens of Erin, whispering thoughts of love into their ears. He is chiefly connected with the banks of the Boyne, where he had a Bru or shinning fairy palace.

For more detailed information on the megalithic passage cairns of Ireland consult the following bibliographic listing: Sacredsite's bibliography on ENGLAND, SCOTLAND, and IRELAND and especially the books:

The Stars and the Stones: Megalithic Art and Astronomy in Ireland; by Martin Brennan

Uriel’s Machine: Uncovering the Secrets of Stonehenge, Noah’s Flood, and the Dawn of Civilization; by Christopher Knight and Robert Lomas 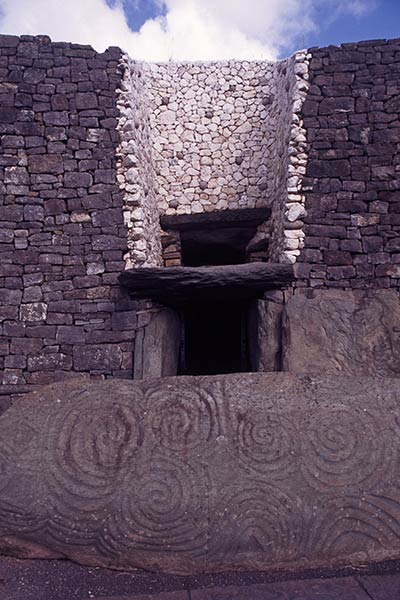 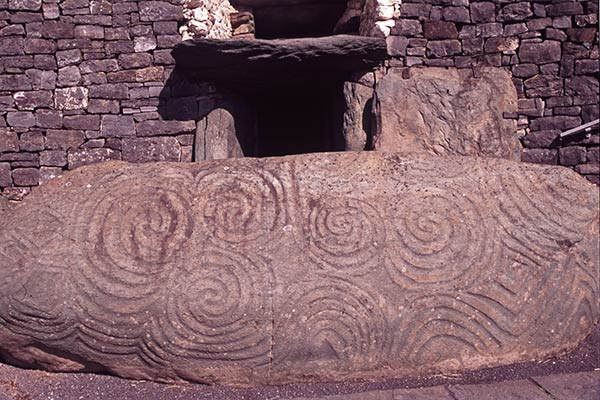 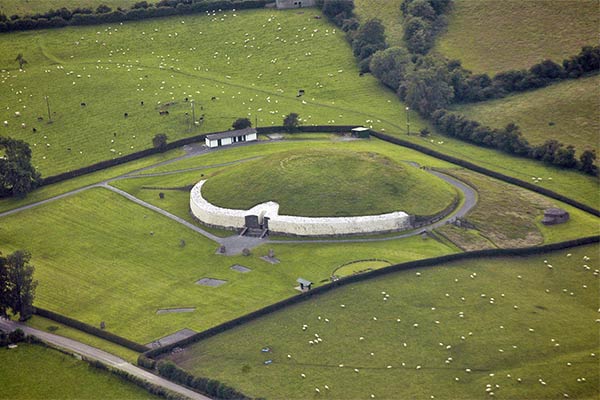