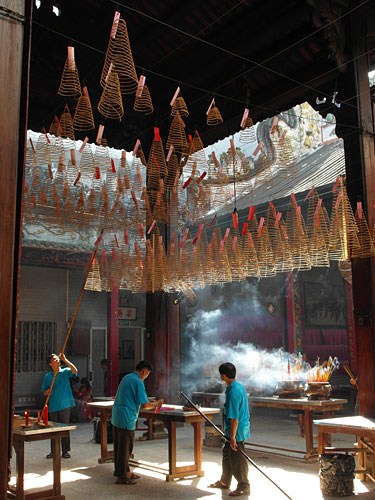 
The Chua Ba Thien Hau Pagoda (The Pagoda of the Lady Thien Hau) is a Chinese style temple located in the Cho Lon district of Ho Chi Minh City. It is dedicated to Thien Hau, the Lady of the Sea, who is also known as Mazu. Thien Hau is a deity of traditional Chinese religion, who is revered in the southern maritime provinces of China and in overseas Chinese communities. She is not specifically a deity of Taoism or Buddhism, though she has been brought into connection with figures and themes from Taoism and Buddhism. 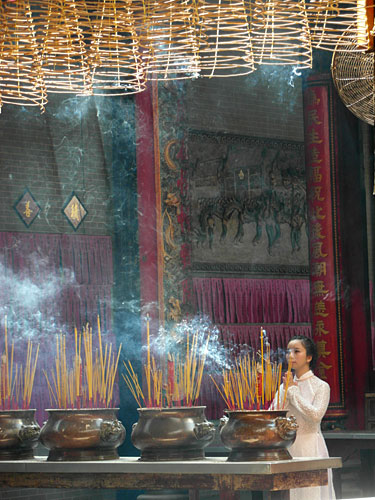 
Thien Hau is revered by seafaring cultures as she has the ability to travel over sea, by mat or cloud, to protect or rescue stranded seafarers and fishermen. The pagoda, one of the oldest of Chinese community in Ho Chi Minh City, was built in around 1760, then restored continuously in 1800, 1842, 1882, 1890 and 1916. Many of the materials used for constructing the pagoda were brought from China.

The interior of the temple is a partially covered courtyard, at the end of which is the altar to Thiên Hậu, where stand three statues of the goddess. The faces of the statues are bronze in color, and the clothes and crowns are multi-colored. The exposed portions of the courtyard contain incense burners, and give a view of the remarkable porcelain dioramas that decorate the roof. The dioramas show scenes from a 19th century Chinese city, and include such colorful figures as actors, demons, animals, and Persian and European sailors and traders. One scene depicts three Taoist sages representing longevity, fecundity and prosperity.

Suspended over the main worship area, in front of the altar of Thien Hau, are dozens of incense coils. Visitors to the temple frequently purchase these, attach their names to the coils, and then have them hung from the ceiling of the temple. As the incense smoke curls upwards in the air, the pilgrims believe their prayers are transmitted to the deity. Many of the incense coils are quite large, with a diameter of more than a meter, and can burn for several weeks.

The festival of worshipping Thien Hau on the 23rd day of the 3rd month of Lunar year is one of the most popular annual festivities of Chinese people in Vietnam. 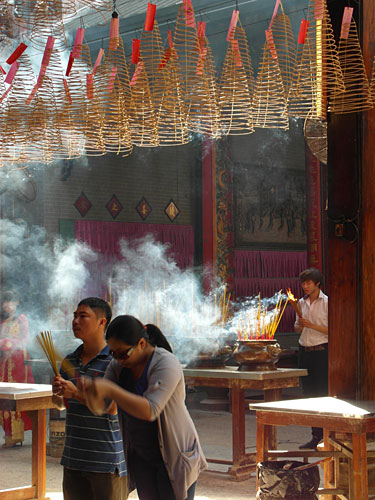