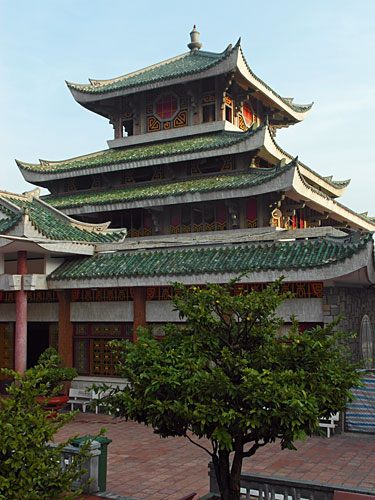 
The temple of Ba Chua Xu, a protector goddess, was constructed in 1820 at the foot of Sam Mountain, to the west of the town of Chau Doc. According to legend, in the early 1800’s villagers found a statue of a lady dating to the 6th century in the forest. A temple was built in her honor with the hopes that she would bring people better lives and bountiful harvests. The temple is constructed according to the Chinese character “quoc” with four roofs of blue tiles. Within the temple is a much-venerated marble statue of Ba Chua, meaning “country lady”. Worshippers touch her statue and ask for her protection and benediction. A great festival is held annually from the 23rd to the 27th of the fourth lunar month with the 25th day being the most important. During the festival days, many traditional cultural activities and dances are organized.