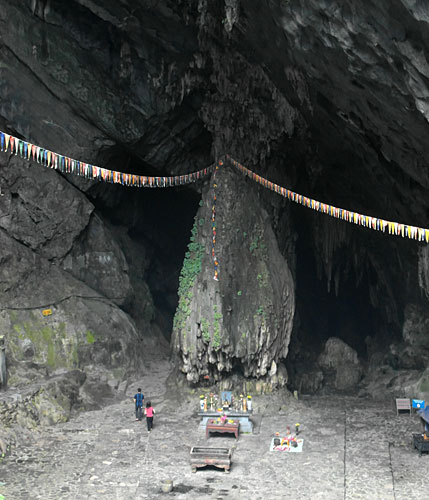 
Located approximately 70 kilometers south of Hanoi, and downstream from the town of My Duc on the Yen River in the Huong Tich Mountains, Chua Huong is a riverside complex of Buddhist temples that draws large numbers of pilgrims from throughout Vietnam. Legends claim a Buddhist monk discovered the site over 2000 years ago and that the first temples were constructed in the 15th century.

The main pilgrimage season at Chua Huong is during the Huong Pagoda festival, when hundreds of thousands of pilgrims make their way to Huong Tich cave and the other temples. The longest lasting festival in Vietnam, it officially begins on February 15 on the lunar calendar, but the peak in visitors lasts from the middle of January to the middle of March.

The primary temple in the complex is known as the Perfume Pagoda. Also known as Chua Trong (meaning Inner Temple), it is situated inside the Huong Tich Cave, which is a steep 4-kilometer climb uphill from the river. The entrance of the cave has the appearance of an open dragon’s mouth and Chinese characters are carved in a wall at the mouth of the cave. Inside the cave are many statues of deities, including a large statue of the Buddha, as well as one of the Bodhisattva Quan Am. Among the naturally occurring features of the cave are numerous stalactites and stalagmites, many of which are named, believed to possess special powers, and worn smooth from years of rubbing by visitors. Pilgrims often gather under one particular stalactite, which resembles a breast, to catch drops of water in hopes of being blessed with health. Huong Tich cave is also considered a sacred place because legend says that the Bodhisattva Quan Am visited it in order to help save human souls. Important temples at the lower, riverside part of the complex include the Den Trinh, Thien Tru and Giai Oan. 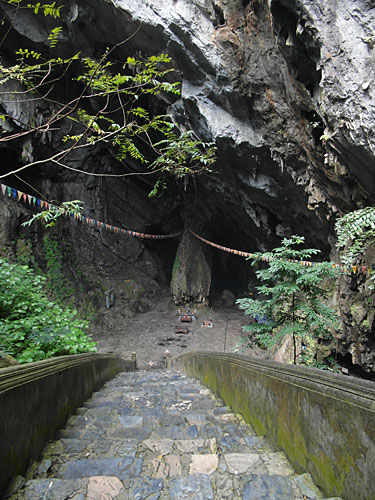