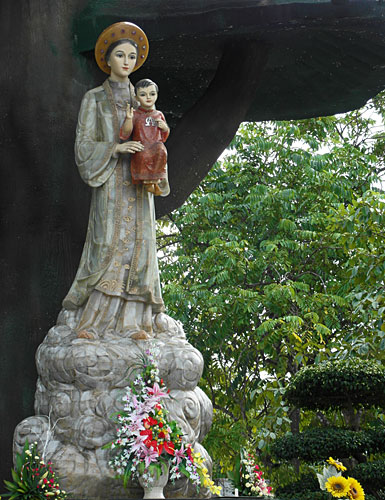 
Located 40 kilometers from the city of Hue, the Shrine of Our Lady of La Vang marks a site where an apparition of Mary was reportedly seen in 1798.

According to legend, Christians had sought refuge in the rainforests of the Quang Tri Province, during which time many became very ill. While hiding in the jungle, the community gathered every night at the foot of a tree to pray. One night in 1798, in the branches of the tree, a lady appeared, wearing the traditional Vietnamese dress and holding a child in her arms, with two angels beside her. The Catholics interpreted the vision as the Virgin Mary and the infant Jesus Christ. They said that Our Lady comforted them and told them to boil leaves from the trees for medicine to cure their ills.

In 1802 the Christians returned to their villages, passing on the story of the apparition in La Vang and its message. As the story of the apparition spread, many more visitors and Christians came to pray at this site. In 1820, a chapel was built. From 1830-1885 another wave of persecutions decimated the Christian population, during the height of which the chapel of Our Lady of La Vang was destroyed. In 1886, construction on a new chapel began and it was renovated in 1924 and 1959. In 1961, the Catholic bishops of Vietnam selected the Church of La Vang as the National Sacred Marian Center. Today’s church was rebuilt from 1995 to 2004 with a bell tower, a praying square and pilgrimage house.

Some sources state that the term La Vang was a derivative of the Vietnamese word meaning crying out. Scholars believe it comes from the ancient practice of naming a location for a genus of a tree or plant native to the area, la meaning ‘leaf’ and vang meaning ‘herbal seeds’. 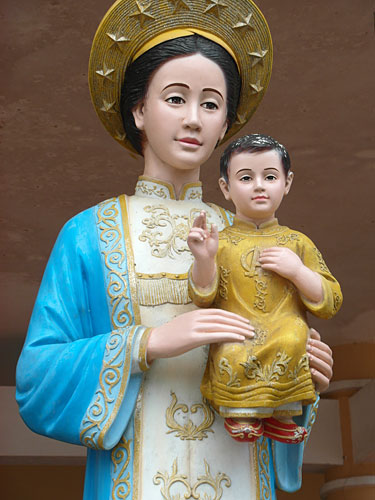