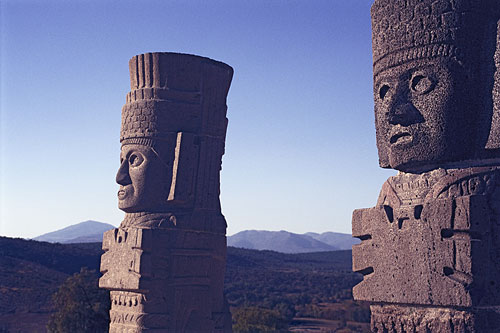 
Towards the end of the Classic period (after the decline of the great city of Teotihuacan around 700 AD), various waves of indigenous invaders migrated from the north into Mesoamerica. Of these numerous groups, the most important were the Toltec people. The Toltecs mixed with people already living in the valleys of the present-day state of Hidalgo. Around the year 1050 they developed their city of Tollán into the capital of an empire which came to dominate the center of Mexico and spread its influence to distant areas. The Toltec emergence is thought to mark the rise of militarism in Mesoamerica, as their armies used superior force to dominate other societies in the region.

The city of Tollán, the legendary Toltec capital, is mentioned in a number of Post-Conquest sources, including Sahagún's (General History of the Things of New Spain ) as well as in indigenous documents known as códices. The Aztecs told the early Spanish missionaries of a city called Tollán where the Toltecs had once lived:

"And there was a hill called Tzatzitepetl. It is also just so named today. ... And there dwelt all varieties of birds of precious feather: the lovely cotinga, the resplendent trogon, the touripal, the roseate spoonbill." (Florentine Codex, pg 12).

An examination of the written sources and legends of the Aztecs revealed that they were clearly aware of Teotihuacan, another great ruined city, and did not consider this to be the capital of the Toltecs. When questioned on the subject, they indicated the location of another ancient city far to the northwest of their own capital of Tenochititlan. This ruined city was said to be on the hill of Tzatzitepetl, where the Aztecs themselves had excavated the pyramids in search of the riches of the Toltec kings. In 1940, archaeologist Jorge Acosta conducted excavations of the Cerro del Tesoro near the village of Tula de Allende (about 64 kilometers or 40 miles north of Mexico City), and discovered the architectural remains of the former city of Tollán (now called Tula). 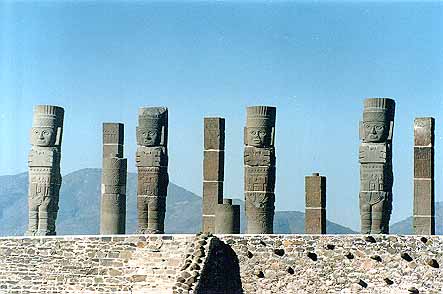 The Toltecs were a Nahuatl speaking people and their name has many meanings such as ‘urbanite,’ a ‘cultured’ person, and the ‘reed people,’ derived from their urban center, Tollán (‘Place of the Reeds’). Tula was the major city of the Toltecs and according to legend had been founded by the mythological figure Quetzalcoatl (the Plumed Serpent), an ancient deity which the Toltecs had adopted from earlier cultures and worshiped as the god of Venus. The ruins of the archaeological site are concentrated in two clusters at opposite ends of a low ridge. Recent surveys indicate that the original urban area covered at least three square miles. The ruins include the remains of a palace, two ball courts and three temples shaped like truncated pyramids. The largest of the pyramid temples, which is surmounted by 15 foot (4.6 meter) columns in the form of stylized human figures, is thought to be dedicated to Quetzalcoatl. This pyramid has been restored and the tall statues, called Atlanteans (Los Atlantes), have been erected on its summit. Though small, the pyramid was highly decorated. The sides of the five terraces were covered with sculptured and painted friezes of felines, birds of prey devouring human hearts, and human faces extending from the jaws of serpents. A stairway on the southern side led to a highly ornamented, two-room temple at the summit. A distinctive feature of the pyramid’s base are its walls covered with slabs of volcanic tuff, with bas-reliefs of jaguars and coyotes participating in a sacred procession. Other slabs display eagles and vultures devouring human hearts, the principal feature being a supernatural being, probably Quetzalcóatl himself, emerging from a fantastic animal that is a combination of jaguar, serpent and eagle. Between the reconstructed ball courts sits the Templo Quemado, or Burned Palace. Its dozens of ruined columns delineate what was once probably an important governmental building. Directly to the east is the restored Templo de Tlahuizcalpantecuhtli, or Temple of the Morning Star.

At the height of its splendor, Tula had around 50,000 inhabitants who practiced agriculture by means of small systems of dams and canals, since rain was scarce in the area. During the reign of Quetzalcóatl, it was said that Tula’s fertile land produced abundant harvests and the city was visited by merchants bearing valuable materials such as cacao, precious metals, jaguar hide, jade and ceramics from Chiapas and Guatemala. The artisans of Tula were themselves famous for producing some of the most beautiful objects in Mesoamerica, especially those made of the volcanic glass obsidian. Tula also traded with the Mayan city of Chichén Itzá and many Toltec building influences may be found there.

Indigenous historians and Spanish chroniclers frequently mentioned the character named Quetzalcóatl (meaning beautiful or plumed serpent). Myths describe Quetzalcoatl as the priest-king of Tula and that he never offered human victims, only snakes, birds and butterflies. According to one legend, a rival Toltec deity named Tezcatlipoca (the god of the night sky), drove Quetzalcoatl and his followers out of Tula around 1000 AD. Quezalcoatl then wandered to the coast of the "divine water" (the Atlantic Ocean), where he burned himself on a pyre, later emerging as the planet Venus. According to another version, he embarked upon a raft made of snakes and disappeared beyond the eastern horizon. The Central Mexican written accounts such as the "Legend of the Suns" also mention Quetzalcoatl departing for the Mysterious East at about the same time (948 AD).

The legend of the victory of Tezcatlipoca over the Feathered Serpent probably reflects historical fact. The first century of the Toltec civilization was dominated by the Teotihuacan culture, with its ideals of priestly rule and peaceful behavior. The pressure of the northern immigrants brought about a social and religious revolution, with a military ruling class seizing power from the priests. Quetzalcoat’s defeat symbolized the downfall of the Classic theocracy. His sea voyage to the east may also be connected with the invasion of Yucatan by the Itza tribe. Quetzalcoatl's calendar name was Ce Acatl (One Reed). The belief that he would return from the east in a One Reed year later led the Aztec sovereign Montezuma II to regard the Spanish conqueror Hernan Cortez and his soldiers as divine envoys, because 1519, the year in which they landed on the Mexican Gulf coast, was a One Reed year.

It would seem that Tula ended in a way similar to Teotihuacan. Around the year 1170, the city and its ceremonial center were ransacked and partially destroyed. The Toltec civilization declined in the 12th century as the Chitimecs and other tribes invaded the central valley and eventually sacked Tula. Much of the great city was later destroyed by the Aztecs.

Besides continuing restoration within the ceremonial precinct, archaeologists have explored outlying residential areas. Architectural and stylistic correspondences between Tula and several Mayan centers on the north Yucatán peninsula, primarily at the site of Chichén Itzá, indicate that Toltec influence pervaded the area. This influence is believed to stem from splinter groups of Toltec who migrated into the Mayan region and established hegemony in the early Post-Classic period (900-1200 AD). 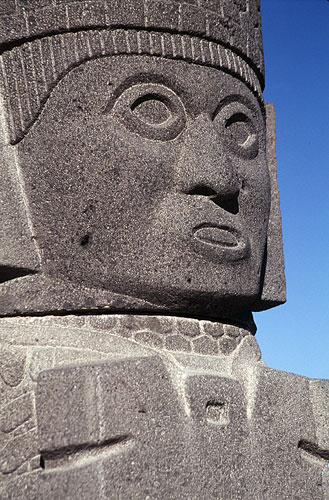