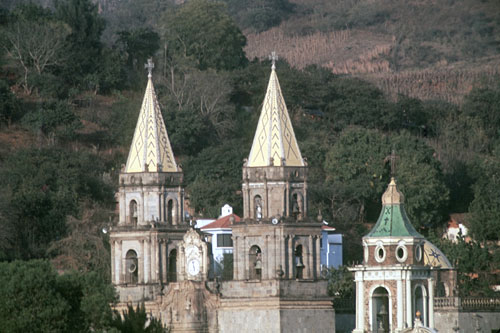 
The Christian shrine at Talpa de Allende, dedicated to a manifestation of the Virgin Mary, is an example of a type of shrine known as “miracle-causing”. Millions of Christian pilgrims have visited the site to pray for such things as cures from diseases, loving mates, healthy children, or simply good grades on academic examinations. Many of these prayers have been answered. So many, in fact, that the image of the Virgin has attained the legendary status of being a miracle-causing statue. It is vitally important to note, however, that long before Talpa became a pilgrimage site for Christians, the same area was sacred to a pagan Earth Goddess named Cohuacoatl. There has been an ancient and continuing tradition of sacredness at this place.

This multi-cultural veneration and use of sacred places may be examined from several perspectives. One concerns the clear difference between perception and interpretation of perception. In ancient, pre-Christian, times people had perceptual experiences at Talpa de Allende, which they interpreted (and then labeled) as deriving from the presence of an Earth Goddess with the name of Cohuacoatl. Other people, centuries later, with a different world view and a different set of religious notions, had relatively the same perceptual experiences at Talpa, but interpreted and labeled those experiences according to their different religious notions.

There is no question that many people have had significant experiences of some mysterious energy or presence at Talpa. What is being proposed is that while these experiences were, by and large, quite similar, they were explained in disimilar ways. Pre-Christian peoples, having no exposure to Christian legends of the Virgin Mary, spoke in their own religious terms of an Earth Goddess. Centuries later, as local peasants were influenced by the Christian world view of the colonial Spanish, they began to interpret and label their experiences in predictably Christian way. Their experiences of the miracle-causing power of Talpa were attributed to the Virgin Mary. Ultimately, it does not matter what images, legends or religious notions are used to explain the different powers, or characteristics, of sacred sites. These explanations, these labels - whatever their culture or epoch of origin - are merely pointing to something beyond themselves. Something knowable not by explanation but only by experience. For people visiting the sacred sites, long ago or in current times, the important thing is to come in contact with the power of place, to steep one’s heart and soul in the presence of its mysterious holiness.