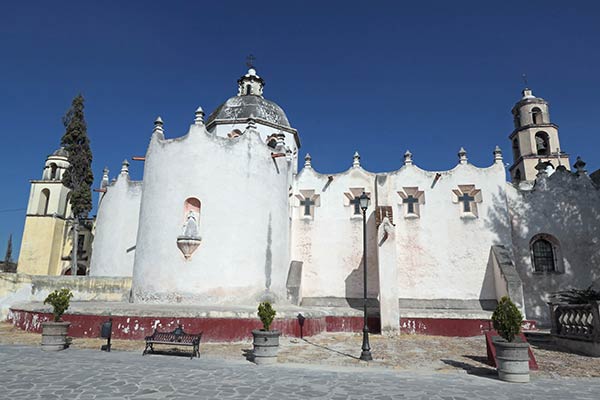 
In the state of Guanajuato, seven miles northeast of the artist town of San Miguel de Allende, is the small but much venerated pilgrimage church of Atotonilco. In the indigenous language of the region, Atotonilco (pronounced ah-toe-toe-NEAL-co) means 'Place of the Hot Waters' and the site actually began as a hacienda with a spring, from which curative waters still bubble forth. Luis Felipe Neri de Alfaro, a local priest and native of San Miguel, acquired the land from the hacienda's owner, Don Ignacio Garofa, and began construction of the church on May 3, 1740. Padre Alfaro commissioned an anonymous artist, Miguel Antonio Martinez de Pocasangre, to paint the murals for which the church is so famous. Padre Alfaro guided and collaborated with Pocasangre so that it is the priest's own imaginative vision which unfolds in dramatic scenes over the walls and ceilings of the shrine. The life, passion and resurrection of Jesus are the main subjects of the frescoes.

The central nave was dedicated eight years later and work then began on the sculptures and paintings in the Cavalry Chapel. Three years later Padre Alfaro completed the impressive Chapel of The Holy Rosary which is dominated by an ornate altar of carved, gold-encrusted wood embellished with paintings on Venetian mirrors. Additionally the lives of Catholic saints and martyrs and scenes of the Last Judgment are linked by ornate banners and colorful floral decoration. The church is sometimes referred to as the "Sistine Chapel of the Americas" and almost every square inch of the walls and ceilings inside the Sanctuary is covered with fresco paintings in a riotous outpouring of Mexican folk art. The murals also portray angels, archangels, saints, and demons amidst decorations of fanciful flowers and fruits.

Some of the murals are among the most gruesome and somber paintings in the world. The central image is of a horribly bleeding Christ. All around him are other tortured, bleeding, dying and decaying people. The murals are darkly painted, darkly lit, and the whole place has a somewhat depressing energy. In addition to these devotional murals, the church contains a treasury of sculptures, also dating from the late 1700s. Because of neglect and environmental degradation over the centuries, murals and sculptures are in extremely fragile condition. Visitors, anxious to carry away souvenirs, have contributed to the deterioration of the paintings by scraping the walls.

Today the Sanctuary of Atotonilco retains its special place in the religious life of central Mexico. A compound of buildings surrounding the shrine includes dormitories, dining rooms, and meeting halls for the many religious retreats held throughout the year. Thousands of Christians come each year to participate in religious exercises such as sleeping in stone cells on cold rock floors, crawling around the perimeter of the shrine on bare and bloody knees, wearing crowns of thorns, and flagellating themselves with whips. This is done for a variety of reasons. Many of the pilgrims feel they must experience some of the pain they imagine Christ felt during his carrying of the cross to hill of Golgatha, and his subsequent hanging on the cross. Local history recounts that from 1880 to the present times as many as 100,000 people a year have made pilgrimages to the shrine. 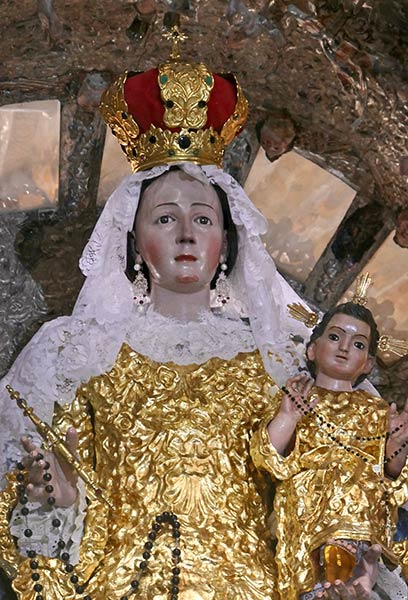 
Atotonilco's small population is expanded greatly when these retreats are held. Approximately thirty weeks a year 5,000 to 10,000 pilgrims converge on the shrine from all parts of Mexico. The usually deserted, dusty main street of the village is filled with worshippers browsing among the stalls of vendors selling religious articles and clothing, pottery and food. The plaza is filled with the sounds and smells of fiesta. Traditional dances are also held at the shrine on the third Sunday of July.

In a tradition that dates from the early 1800's an annual midnight pilgrimage starts from the sanctuary of Atotonilco and covers the seven miles to San Miguel de Allende. The procession of several thousand pilgrims begins at midnight and arrives in San Miguel at the first light of day, following a six and a half hour walk. It is a solemn procession with the people singing and carrying brass lanterns to light the way through the dark night. Bonfires blaze alongside the road and showers of fireworks light up the sky ahead of the procession.

The pilgrims walk to accompany la Milagrosa Imagen del Señor de la Columna (the Miraculous Image of The Lord of The Column) from his home in Atotonilco on his annual visit to San Miguel. The statue is highly venerated by the people of the area and numerous miracles are attributed to it. The miracles and the tradition of the pilgrimage began some 175 years ago when an epidemic struck San Miguel, killing many of its inhabitants. A wealthy merchant of San Miguel, gravely ill, asked that a religious image be brought to him as a comfort in his final hours. The statue was carried from Atotonilco to his home. The dying merchant recovered and the epidemic in San Miguel was broken. The tradition of the visit by the image to San Miguel every year during the Easter season has been maintained ever since.

The World Monuments Fund recently named this historic and artistically important pilgrimage church to its list of "100 most endangered monuments." With a grant from American Express and the State of Guanajuato in 1996 a Mexican non-profit organization began work on the restoration of the Chapel of the Virgin of the Rosary. The damaged exterior stucco and roof were replaced, and an inspection of the interior murals was carried out with analysis of the original pigments and binders. Following this research, the murals were professionally cleaned and restored to the highest standards. With these efforts, the fabric of the church and its murals have been stabilized. 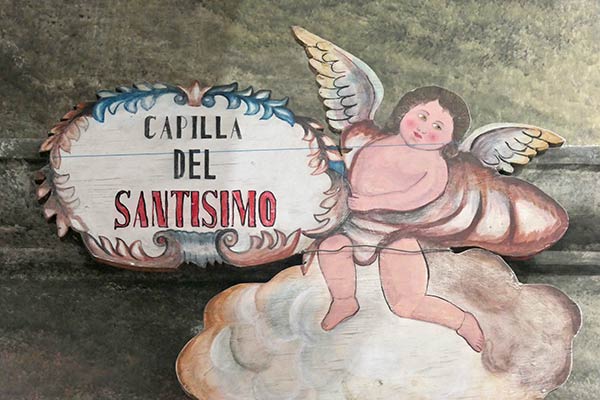