While the earliest archaeological artifacts thus far found at Chichen Itza date from AD 1 to 250, it is probable that the site was settled at a far earlier time. Proto-Mayan tribes had inhabited the flat limestone plateau that makes up much of the Yucatan peninsula for at least 8000 years. These nomadic peoples would certainly have discovered the enormous natural well, called a cenote, next to which the city of Chichen Itza later grew. As a Maya social center, Chichen Itza began its rise to prominence with the arrival of a seafaring people in the eighth century. Called the Itza by archaeologists, these merchant warriors first colonized the northern coastal areas of the Yucatan peninsula and then ventured inland. After their conquest of the holy city of Izamal, the Itza settled at the great cenote, then known as Wuk Yabnal, meaning "Abundance Place". Their city became known as Chichen Itza, which means "Mouth of the Well of the Itza". From this site, the Itza Maya rapidly became the rulers of much of the Yucatan peninsula.

"After over a thousand years of success, most of the kingdoms of the southern lowlands collapsed in the ninth century. In the wake of this upheaval, the Maya of the northern lowlands tried a different style of government. They centered their world around a single capital at Chichen Itza. Not quite ruler of an empire, Chichen Itza became, for a time, first among the many allied cities of the north and the pivot of the lowland Maya world. It also differed from the royal cities before it, for it had a council of many lords rather than one ruler."

Previous to the research of Schele and Freidel, the scholarly interpretation of the history of Chichen Itza held that the city was occupied several times by various groups of people, beginning with the Maya and ending with Toltec invaders from the city of Tula in central Mexico. While numerous archaeology and history books still ascribe to this interpretation, it is now known that the Maya occupied Chichen Itza continuously. The Toltec influences found in the art and architecture of certain areas of the great city were the result of the patronage of a cosmopolitan nobility involved in trade with the Tula Toltecs and other Mesoamerican peoples.

The Temple of Kukulkan, the Feathered Serpent God (also known as Quetzalcoatl to the Aztecs and Toltecs) is the largest and most important ceremonial structure at Chichen Itza. Called El Castillo (the Castle) by the Spaniards, the ninety-foot tall pyramid was built during the 11th to 13th centuries directly upon the multiple foundations of previous temples. The architecture of the pyramid encodes precise information regarding the Mayan calendar. Each face of the four-sided structure has a stairway with ninety-one steps, which together with the shared step of the platform at the top, add up to 365, the number of days in a year. These stairways also divide the nine terraces of each side of the pyramid into eighteen segments, representing the eighteen months of the Mayan calendar. The pyramid is also directionally oriented to mark the solstices and equinoxes. The axes that run through the northwest and southwest corners of the pyramid are oriented toward the rising point of the sun at the summer solstice and its setting point at the winter solstice. The northern stairway was the principal sacred path leading to the summit. At sunset on the vernal and autumnal equinoxes, an interplay between the sun's light and the edges of the stepped terraces on the pyramid creates a fascinating - and very brief - shadow display upon the sides of the northern stairway. A serrated line of seven interlocking triangles gives the impression of a long tail leading downward to the stone head of the serpent Kukulkan, at the base of the stairway. Adjacent to the head of Kukulkan, a doorway leads to an interior staircase ending at a small and very mysterious shrine.

According to Maya scholars Linda Schele and David Friedel, the massive pyramidal temples found at Chichen Itza, Uxmal, Palenque and many other major Maya sites were symbolic sacred mountains. Writing in A Forest of Kings: The Untold Story of the Ancient Maya, Schele and Freidel explain that:

"To the Maya, the world was alive and imbued with a sacredness that was especially concentrated at special points, like caves and mountains. The principal pattern of power points had been established by the gods when the cosmos was created. Within this matrix of sacred landscape, human beings built communities that both merged with the god-generated patterns and created a second human-made matrix of power points. The two systems were perceived to be complementary, not separate....The world of human beings was connected to the Otherworld along the wacah chan axis which ran through the center of existence. This axis was not located in any one earthly place, but could be materialized through ritual at any point in the natural and human-made landscape. Most important, it was materialized in the person of the king, who brought it into existence as he stood enthralled in ecstatic visions atop his pyramid-mountain....When new buildings were to be constructed, the Maya performed elaborate rituals both to terminate the old structure and contain its accumulated energy. The new structure was then built atop the old and, when it was ready for use, they conducted elaborate dedication rituals to bring it alive....So powerful were the effects of these rituals that the objects, people, buildings, and places in the landscape in which the supernatural materialized accumulated energy and became more sacred with repeated use. Thus, as kings built and rebuilt temples on the same spot over centuries, the sanctums within them became ever more sacred. The devotion and ecstasy of successive divine kings sacrificing within those sanctums rendered the membrane between this world and the Otherworld ever more thin and pliable. The ancestors and the gods passed through such portals into the living monarch with increasing facility. To enhance this effect, generations of kings replicated the iconography and sculptural programs of early buildings through successive temples built over the same nexus....As the Maya exploited the patterns of power in time and space, they used ritual to control the dangerous and powerful energies they released. There were rituals which contained the accumulated power of objects, people, and places when they were no longer in active use. And conversely, when the community became convinced that the power was gone from their city and ruling dynasties, they just walked away."

Recent studies at Chichen Itza by archaeoastronomers have revealed that other structures, besides the Pyramid of Kukulkan, have significant astronomical alignments. For example, windows in the unique circular building known as the Caracol were positioned to be in alignment with key positions of the planet Venus, particularly its southern and northern horizon extremes. Another fascinating, though seldom discussed, mystery at Chichen Itza concerns the strange acoustic anomalies observable at the great ball court and the temple of Kukulkan. Words softly whispered at one end of the great ball court (measuring 545 feet long by 225 feet wide) are clearly audible all the way at the other end and a single clap or shout sounded in the center of the ball court will produce nine distinct echoes. Visitors have also commented on a curious acoustic phenomenon at the pyramid of Kukulkan where the sound of a hand clap is echoed back as the chirping sound of the Quetzal bird, the sacred bird associated with both the name of the pyramid and its deity Kukulkan/Quetzalcoatl. For additional information on these acoustical enigmas, consult the reports listed below.

The Yucatan Peninsula where Chichen Itza is located  is a limestone plain, with no rivers or streams. The region is pockmarked with natural sinkholes, called cenotes, which expose the water table to the surface. One of the most impressive is the Cenote Sagrado, which is 60 metres (200 ft) in diameter, and sheer cliffs that drop to the water table some 27 metres (89 ft) below.

The Cenote Sagrado was a place of pilgrimage for ancient Maya people who, according to ethnohistoric sources, would conduct sacrifices during times of drought. Archaeological investigations support this as thousands of objects have been removed from the bottom of the cenote, including material such as gold, jade, obsidian, shell, wood, cloth, as well as skeletons of children and men.

An Archaeological Study of Chirped Echo from the Mayan Pyramid of Kukulkan at Chichen Itza, by David Lubman
www.ocasa.org/MayanPyramid.htm

The 'El Castillo' pyramid before its archaeological reconstruction 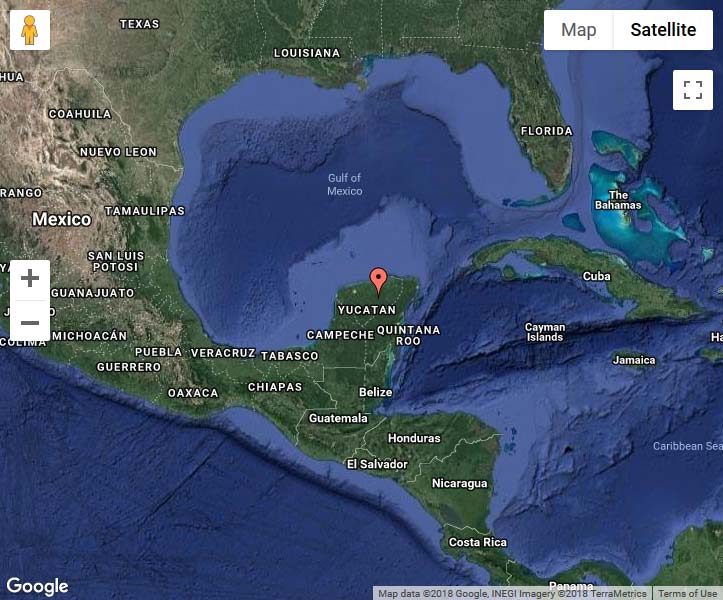