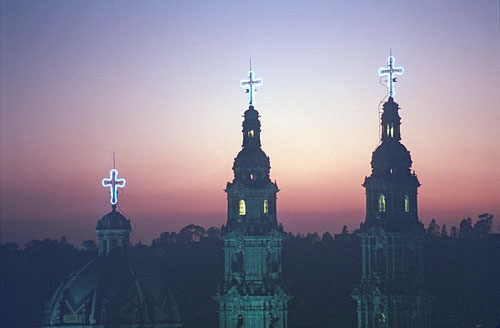 
Located in the state of Jalisco, in central Mexico, 76 miles (123 kilometers) northeast of the city of Guadalajara, the small town of San Juan de los Lagos is the second most visited pilgrimage shrine in Mexico. The story of the place begins in 1542 when Father Miguel de Bologna, a Spanish priest, brought a statue of the Virgin of the Immaculate Conception to the village. The town was then called San Juan Mezquititlan Baptist but its name was changed to San Juan de Los Lagos in 1623. In that year the daughter of some local Indian peasants fell ill, her parents prayed for her health, and the young girl recovered. Following this miracle, the statue began to be venerated by an increasing number of pilgrims including Indians, Spanish and mestizo. During this period the statue acquired its own local identity as Our Lady of San Juan de los Lagos. Between the early 17th century and the middle of the 19th century a pilgrimage fair was held each year on November 30 to celebrate the original installation of the statue in the shrine.

The present church, begun in 1732, was built in the Mexican baroque style. The statue of the Virgin was installed in 1769 and the bell towers were completed in 1790. In 1972 the church was recognized as a basilica. Inside the church, upon a platform with an upturned crescent moon, stands the statue of the Virgin. About 20 inches (50 cm) tall, the statue was made by the Tarascos Indians of the state of Michoacan using an indigenous technique called titzingueni, in which a frame of wood is covered by a paste of corn pith and orchid juice, and then coated with gesso and painted. Similar cult statues are still venerated in other parts of Mexico, including Nuestra Senora de Salud (Our Lady of Health) in Patzcuaro and the Virgin of Zapopan in the city of Guadalajara. Sometime in the late 16th or early 17th century the statue was modernized by being enclosed in a frame and draped with clothing. The Virgin’s hands are folded in prayer, she has long brown hair, and wears a white gown and blue robe. On her head is a golden crown.

At the end of January and beginning of February each year a great pilgrimage occurs to the shrine and the city grows many times in size. This festival is attended by more than a million people, many of them walking, from all over Mexico. During a week of festivities there are hundreds of temporary stalls selling pilgrimage icons, multiple bands of musicians playing around the great basilica, fire-works demonstrations in the evenings, and a palpable feeling of spiritual joy throughout the town. In my long years of pilgrimage around the world I have been to many religious festivals but few so highly charged and boisterous as that of San Juan de los Lagos. Truly a density of holiness saturates and surrounds this shrine during the February festival. 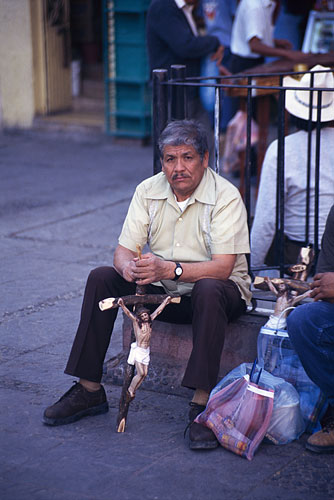 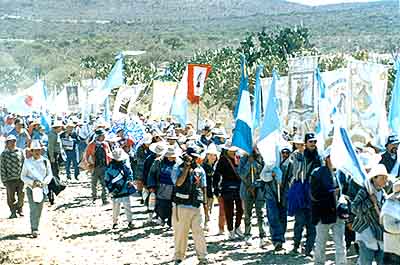