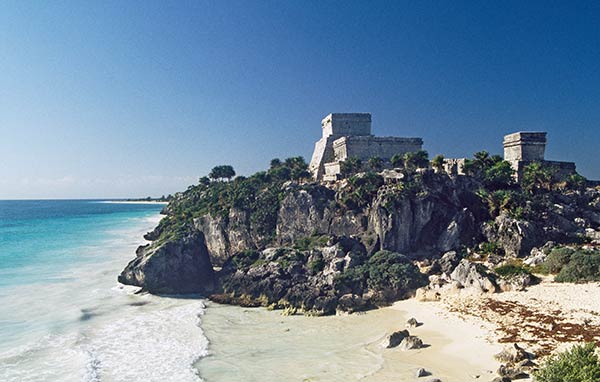 
Eighty miles south of the tourist resorts of Cancun, in the Yucatan state of Quintana Roo, stand the ruins of the Mayan city of Tulum. Its original name long forgotten, Tulum is a Nahuatl term meaning 'walled city'. While occupied from as early as the Mayan Pre-Classic period (300 BC to 250 AD), nearly all the existing structures date from the late Post-Classic period (1200 AD to the time of the Spanish Conquest in the early 16th century) when Tulum was a maritime trading center. Recent research has shown that Tulum was also a pilgrimage site for Maya women on their way to the holy island of Cozumel, where stood the sanctuary of the goddess IxChel (pronounced eesh-chel). IxChel was the preeminent goddess of the Maya pantheon from 100 to 900 AD and her shrine at Cozumel was visited by large numbers of women from throughout the Maya territories, making it one of the greatest pilgrimages in the pre-Colombian world. Ix Chel figures prominently in the Tulum temple murals and the coastline in the Tulum region is fascinatingly female, with a multitude of coastal towns having the feminine Ix (eesh) prefix in their names.

Though architecturally somewhat crude compared to other classic Maya sites such as Uxmal and Chichen Itza, Tulum has one of the most beautiful settings of any city constructed by the Maya. Perched on a cliff overlooking pristine beaches and an aquamarine sea, the Temple of Kukulkan dominates the ruins. This structure, called El Castillo (meaning 'the castle') by the conquering Spaniards was never a castle but rather a shrine and ceremonial center.