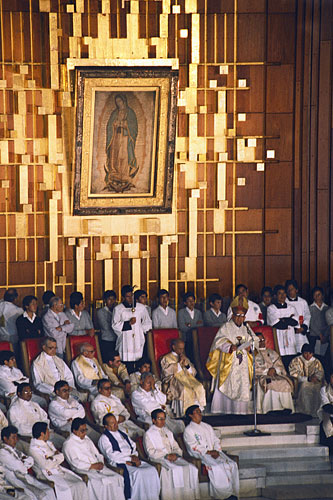 
The enormous basilica of Nuestra Senora de Guadalupe in Mexico City is the most visited pilgrimage site in the Western Hemisphere. Its location, on the hill of Tepeyac, was a place of great sanctity long before the arrival of Christianity in the New World. In pre-Hispanic times, Tepeyac had been crowned with a temple dedicated to an Earth and fertility goddess called Tonantzin, the Mother of the Gods. Tonantzin, like the Christian Guadalupe who usurped her shrine, was a virgin goddess, also associated with the moon. The Tepeyac hill and shrine had been an important pilgrimage place for the nearby Aztec capital city of Tenochtitlan. Following the conquest of Tenochtitlan by Hernan Cortez in 1521, the shrine was demolished, and the native people were forbidden to make pilgrimages to the sacred hill. Such practices were considered by the Christians to be devil worship. This policy of labeling pagan religious practices as demonic already had a more than thousand year history in Christian Europe.

On Saturday, December 9, 1531, a baptized Aztec Indian named Juan Diego set out for church in a nearby town. Passing the pagan sacred hill of Tepeyac, he heard a voice calling to him. Climbing the hill, he saw on the summit a young woman who seemed to be no more than fourteen years old, standing in a golden mist. Revealing herself as the "ever-virgin Holy Mary, Mother of God" (so the Christian telling of the story goes), she told Juan Diego to go to the local bishop and tell him that she wished a church to be built on the hill. Juan did as he was instructed, but the bishop did not believe him. On his way home, Juan climbed the sacred hill and again saw the apparition, who told him to return to the bishop the next day. This time the bishop listened more attentively to Juan's message from Mary. He was still skeptical, however, and so asked for a sign from Mary.

Two days later Juan again went to Tepeyac hill and, meeting Mary, was told by her to climb the hill to the site of their first encounter, pick a bunch of roses that would be growing there, and return with the roses to Mary. Juan climbed the hill with misgivings. It was the dead of winter, and no roses could possibly be growing on the cold and frosty hill. But upon reaching the summit Juan found a profusion of roses, an armful of which he gathered and wrapped in his shawl to carry to Mary. Arranging the roses, Mary instructed Juan to take the shawl-encased bundle to the bishop, for this would be her sign. When the bishop unrolled the shawl, the presence of the roses was astounding. But truly miraculous was the image that had mysteriously appeared on the inside of Juan Diego's shawl. The image showed a young woman without child, her head lowered demurely. Wearing an open crown and flowing gown, she stood upon a half moon. Soon thereafter the bishop began construction of the church.

News of the miraculous apparition of the Virgin's image on a peasant's shawl spread rapidly throughout Mexico. Indians by the thousands, learning that the mother of the Christian God had appeared to one of their own kind and spoken to him in his native language, came from hundreds of miles away to see the image, now hanging above the altar in the new church. The miraculous image was to have a powerful influence on the advancement of the Church's mission in Mexico. In only seven years, from 1532 to 1538, more than eight million Indians were converted to Christianity. The shrine, rebuilt several times over the centuries, is today a great basilica that has space for 10,000 pilgrims. Juan Diego's shawl is preserved behind bulletproof glass and hangs twenty-five feet above the main altar in the basilica. For more than 450 years the colors of the image have remained as bright as if they were painted yesterday, and the coarse-woven cactus cloth of the shawl, which seldom lasts more that twenty years, shows no evidence of decay.

Yearly, an estimated ten million pilgrims come to venerate the mysterious image. Viewing this extraordinary pageant, it is not possible to clearly separate what is Christian and what is indigenous in the ritual being performed. Nuestra Senora de Guadalupe is Mexico's patron saint, and her image adorns churches and altars, house fronts and interiors, taxis and buses, bull rings and gambling dens, restaurants and houses of ill repute. The shrine of Guadalupe is a place of extraordinary vitality and celebration. On major festival days, such as the anniversary of the apparition on December 12th, the atmosphere of devotion created by the hundreds of thousands of pilgrims is truly electrifying. 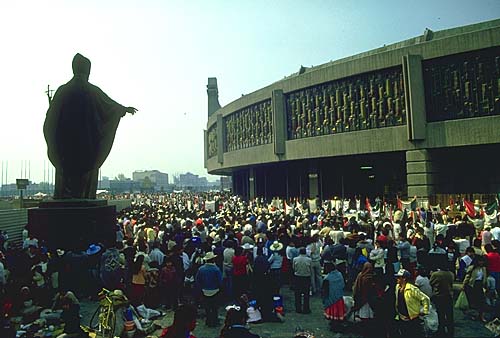 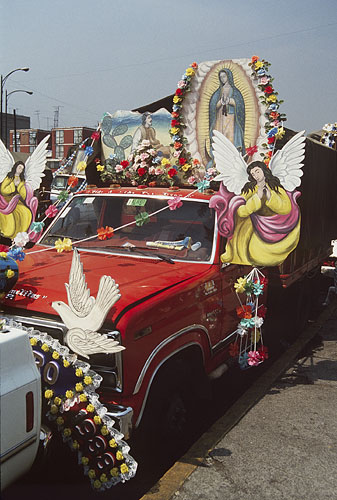