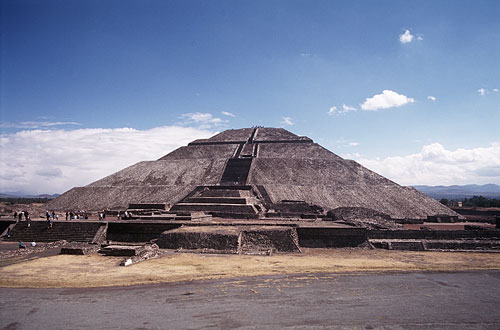 
A few miles northeast of Mexico City stands the ancient site of Teotihuacan, the largest city in Mesoamerica during Pre-Columbian times. Orthodox archaeologists are divided concerning the dating of the site, some believing it flourished from 1500 to 1000 BC, and others stating a later period of 100 BC to 700 AD. However, an increasing number of scholars studying the mythology, anthropology and archaeology of the Valley of Mexico suggest that Teotihuacan may be far older than previously assumed and, amazingly, that it may be part of an archaic planet-spanning sacred geography mapped by a mysterious lost civilization.

One intriguing matter is that the original name of the place is unknown. Its current name Teotihuacan – ‘the place of the gods’ - was given to it by the Aztecs long after the city’s decline and abandonment. Other Mesoamericans before the Aztecs - the Mayans, Zapotecs and Toltecs, for example - were equally mystified by the vast ruins, speaking of them in terms filled with myth and legend. Teotihuacan has truly been an enigma to all who have wandered its desolate grounds.

The most striking visual and architectural structure of Teotihuacan is the towering Pyramid of the Sun (a manmade sacred mountain whose original name and function is unknown). From atop this massive pyramid, whose base is nearly equal in size to that of the Great Pyramid of Egypt, the view is remarkable. Dozens of other pyramids are situated on either side of the mile-long ‘Avenue of the Dead’ and strewn across the vast ruins are the remains of hundreds of other crumbling structures. However, all these structures are only a small part of the site as it once stood. An estimated 200,000 people lived in Teotihuacan in ancient times and their non-religious buildings (dwellings, businesses, etc) were built of wood, which has long since decayed.

There are several fascinating mysteries about the grand city and its pyramids. One of the most interesting concerns the massive, one-foot thick, sheet of granulated mica that until recently covered the entire top level of the Pyramid of the Sun. Removed and sold for profit by an unscrupulous site-restorer in the early 1900’s, the mica had long ago been transported from a mine thousands of miles away in South America. How had the great quantity of mica been brought from such a distance and, equally important, for what purpose had the pyramid been covered with the rare stone? One scientist has suggested that the mica, being a highly efficient energy conductor, could have been used as part of a receiving device for long wave-length celestial radiations. The incoming celestial energy would have been captured by the massive bulk of the pyramid and its sacred geometrical construction, and focused into the snake-like cave beneath the pyramid. This energy, available for human use at any time of the year, would be specially concentrated at certain periods within solar, lunar and stellar cycles. These specific periods were noted by using astronomical observation devices which exist in different places around the geomantically aligned city of Teotihuacan.

Writing in Fingerprints of the Gods, Graham Hancock discusses additional archaeological anomalies of Teotihuacan and suggests that certain structures and alignments within the city (similar to those found at Tiahuanaco in Bolivia, Baalbek in Lebanon and the Great Pyramid of Egypt) may actually date to a far earlier age than conventional theories assume. While it is certainly true that large parts of Teotihuacan are dateable according to the orthodox chronology, evidence is accumulating which indicates the possibility that the site was part of a planet-spanning sacred geography of an advanced civilization in archaic times.

The original ceremonial use of the site most probably began in the small natural cave, now hidden (and locked) beneath the Pyramid of the Sun. With the growth of population and the ensuing development of culture, Teotihuacan grew into the enormous sacred place whose remains we see today. The great antiquity and ruined condition of the site do not, however, prevent contemporary visitors from connecting with the spirit and power of the place. Visitors are encouraged to walk the entire length of the so-called Avenue of the Dead, circumambulate the pyramids of the Sun and Moon (optimally in both directions), then climb and meditate at the top of both pyramids.

The pyramids of the Sun and the Moon (no connections with either celestial object ever being proved) are disposed in such a way to be a copy, an image of the two mountains which lie respectively behind, the Cerro Gordo and the Cerro Patlachique.

The town was planned and constructed on a ‘cardinal grid’ based on two axes, a ‘T-north’ axis oriented 15.5 degrees east of north, and a ‘T-east’ axis oriented 16.5 degrees south of east. This was by no means due to geomorphic reasons (it suffices indeed to think that the river crossing the town was canalized to conform to the grid). Teotihuacan ‘cardinal directions’ are thus rotated with respect to the ‘true’ cardinal directions and tilted one further degree from each other for symbolic reasons. Astronomy plays here a fundamental role, since the most reasonable explanation is the following:

The T-east orientation is a solar orientation. It is too close to east to signal any special event in the motion of the sun at the horizon (solstice and days of zenith passage) however the sun sets at T-west on 13 August and 29 April, and these two dates are separated by 260 days. It is well known that the so called sacred calendar of Mesoamerica (well documented by the Maya, but probably coming from the very early civilization and codified around 4 BC) was composed of 260 days. The origin should be the passage of the sun at zenith, which of course depends on latitude and occurred in those two dates at the latitude of the pre-classic site of Izapa (see Aveni 2001 for a complete discussion). Thus, the T-east orientation was probably a reminder for the sacred calendar of solar origin. What is especially interesting for us here is however the T-north orientation, because it is almost certainly a stellar one.

The axis orthogonal to T-north (which, just as a reminder, is not parallel to T-east) is individuated by an accurate alignment between two so called pecked crosses, pecked symbols incised on the ground, one on a hill at the west of the horizon and the other one in the center of the town. This alignment points to the setting of the Pleiades around 1-4 AD, and this asterism had heliacal rising approximately on the same day of the zenith passage of the sun (18 May) and were culminating near the zenith as well (Dow 1967). Teotihuacan collapsed a couple of centuries thereafter, and it is therefore unlikely that Teotihuacan astronomers were able to realize that the alignment was not accurate any more due to precession. 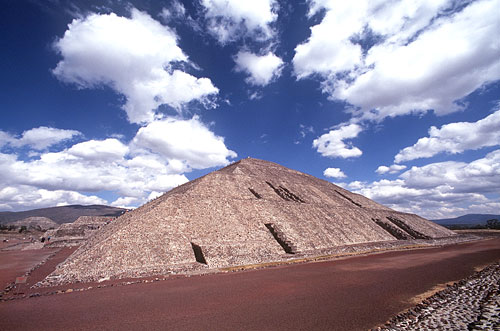 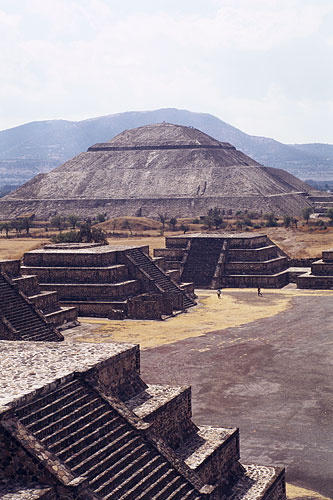 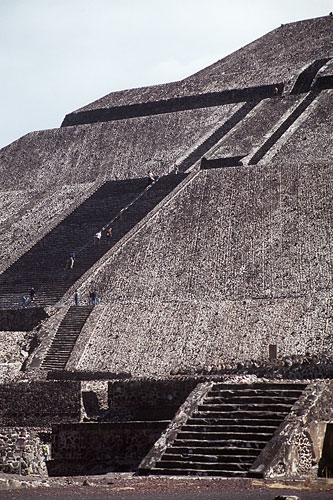 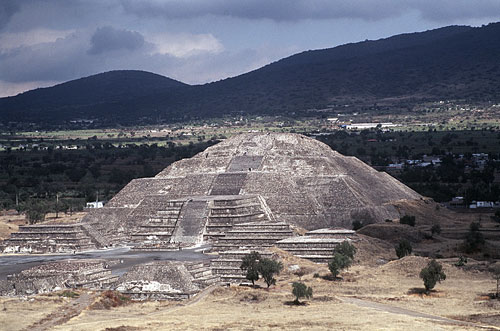 Pyramid of the Moon, Teotihuacan, Mexico

Additional information on Teotihuacan at ancient-wisdom.