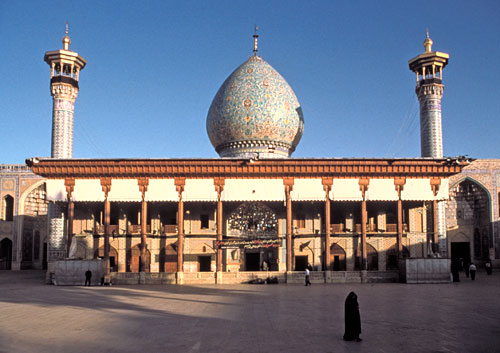 
After the shrines of Imam Reza in Mashhad and Fatima in Qum, the third most venerated pilgrimage destination in Iran is the shrine of Shah Chirag in the city of Shiraz. Archaeological excavation indicates a settlement on the site of Shiraz in the prehistoric period and cuneiform records from the great ceremonial capital of Persepolis, 57 kilometers to the north, show that it was a significant town in Achaemenian times. As a city however, it was founded in 684 AD, after the Arab armies conquered the Sassanians. The Buyids (945-1055 AD) made Shiraz their capital, building mosques, palaces and a great city wall. The 13th and 14th centuries saw Shiraz as a literary center especially famous for its poets Sa'adi and Hafez, both of whom are buried in the city. There are many splendid Islamic monuments in Shiraz, especially its enormous Safavid mosque, but the most notable religious site is the shrine of Syed Amir Ahmad (also called Ahmad ibn Musa).

Amir Ahmad and his brother Mir Muhammad, both of whom were brothers of Imam Reza, took refuge in Shiraz following Abbasid persecution of the Shi'ite sect (Amir Ahmad died or was murdered in 835). The brothers' tombs, originally only simple mausoleums, became celebrated pilgrimage destinations in the 14th century when the pious and art-loving Queen Tashi Khatun erected a mosque and theological school by the tombs. Known locally as Shah Chirag or the 'King of Light', the exquisite tomb of Amir Ahmad is a place of truly stunning beauty. The enormous dome above the shrine is inlaid with hundreds of thousands of pieces of finely crafted tile and the interior walls are likewise covered with myriad pieces of dazzling cut glass intermixed with multi-colored tiles. In the same complex is the mausoleum of Mir Muhammad.

Besides the great pilgrimage shrine of Shah Chirag, Shiraz is also famous for its many Imamzadihs, these being shrines of descendants or relatives of the twelve Shi'ite Imams. The term imamzadih refers to both the shrine structure and the saint associated with the shrine. Different shrines, or rather the imamzadihs watching over them, are believed to possess different miraculous powers and thus pilgrims in Shiraz may seek assistance with such matters as finding a mate, ease in childbirth and treatment of a variety of physical and psychological ailments. 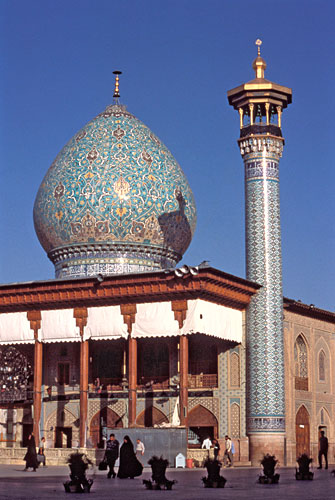