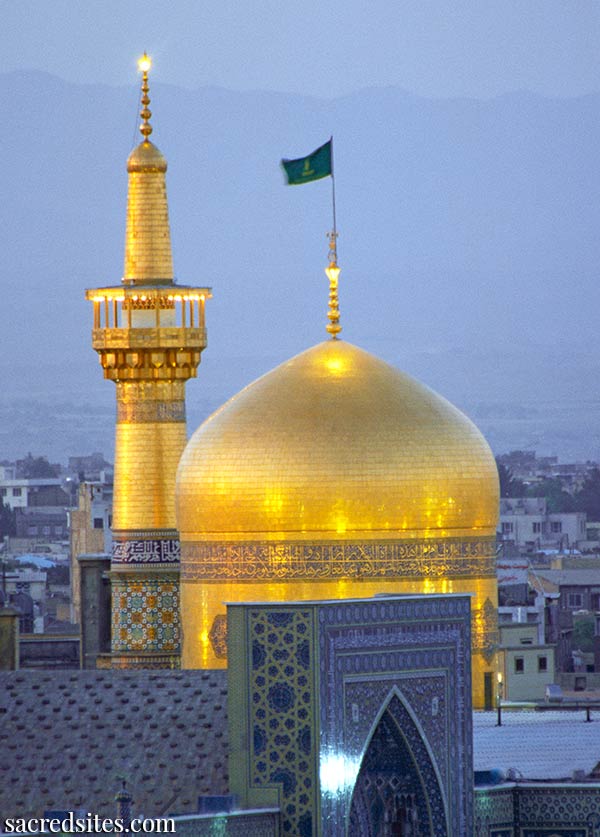 
The capital of Khorasan province in northeast Iran and the second largest city in the country, Mashhad is best known for its beautiful pilgrimage shrine of Imam Reza. The shrine was built on the site of the village of Sanabad, where Imam Reza died in 818 AD (some sources say 817). Imam Reza, the eighth Shi'ite Imam, was born in Medina in 765 AD and was widely known to be a person of both extraordinary scholarship and saintly qualities. At the age of 51 he was surprisingly appointed by the Abbasid Caliph Mamun (a Sunni Muslim) to become his successor as the next caliph. Mamun summoned Imam Reza to Sanabad, publicly proclaimed him his successor, and gave him his daughter in marriage. Mamun's actions, while welcomed by members of the Shi'ite sect, deeply disturbed the rival Sunnis, with the result that several violent uprisings ensued. After staying for a while in Sanabad, Caliph Mamun and Imam Reza departed for Baghdad (to retake the city from political rivals) but during the journey Reza fell ill and rapidly died. The suddenness of the Imam's death aroused suspicions among Shi'ite believers who believed Mamun had poisoned him in order to quell the political unrest resulting from a Shi'ite Imam being proclaimed caliph-to-be of the vastly more numerous Sunni believers.

The Caliph, however, showed sings of deep mourning and built a mausoleum over the Imam's grave in 818 AD, adjacent to his own father's tomb. Because of the widespread Shi'ite belief that Mamun had murdered Reza, the tomb and the village of Sanabad were given the name of Mashhad ar-Rizawi, meaning 'the place of the martyrdom of Riza'. A tradition (legendarily attributed to Imam Reza's father) told that a pilgrimage to Imam Reza's grave would equal 70,000 pilgrimages to Mecca and the tomb of the Imam became a holy place of pilgrimage to which people thronged from throughout Persia.

The original mausoleum over Imam Reza's tomb was destroyed by Sabuktagin, the Ghaznevid sultan in 993 AD but was rebuilt and extensively enlarged by his son Mahmud of Ghazni in 1009 AD. During this time the shrine was ornamented with tiles, some of which are still visible in the innermost dome chamber. In 1220 AD, the Mongols plundered the city and shrine. A century later the Mongol ruler of Iran, Sultan Muhammad Khudabandeh converted to Shi'ism, and during his reign (1304-1316 AD) again renovated the shrine on a grand scale. The celebrated Moorish traveler Ibn Battuta visited Mashhad in 1333 and reported that it was "a large town with abundant fruit trees, streams and mills. A great dome of elegant construction surmounts the noble mausoleum, the walls being decorated with colored tiles. Opposite the tomb of the Imam is the tomb of Caliph Harun al-Rashid, which is surmounted by a platform bearing chandeliers. Whenever a Shi'ite enters to visit he kicks the tomb of al-Rashid with his foot, and pronounces a blessing on ar-Riza. "

The most glorious phase of Mashhad began during the reign of Shahrukh Mirza, the son of Tamerlane, and reached its zenith during the reign of the Safavid kings who ruled Iran from 1501 to 1786. The Safavid kings beautified the religious complex with golden domes, tiled minarets and spacious courtyards as well as extensive academic buildings. Having established Shi'ism as the state religion, the brilliant early Safavid rulers, Shah Ismail I, Shah Tahmasp and particularly Shah Abbas I strongly encouraged pilgrimage to the shrine of Imam Reza, as well as to the shrine of his sister Fatima in the holy city of Qum. Nadir Shah Afshar and the Qajar kings who ruled Iran from 1779-1923 further enlarged and ornamented the shrine complex, though this period also saw the occasional raids of warlike Turks, Uzbeks and Afghans. The shrine was shelled by Russian artillery in 1912 and further damaged by troops of Reza Khan in 1935 and Reza Shah in 1978. Since that time the shrine has undergone near continuous renovation and enlargement, and currently over 20 million pilgrims visit the tomb of Imam Reza each year.

Other shrines in the Mashhad area include: 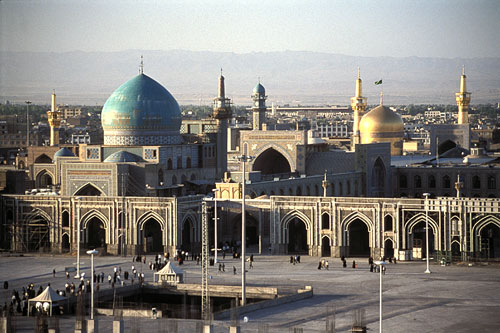 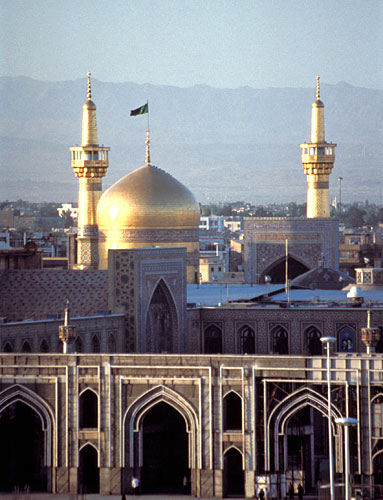