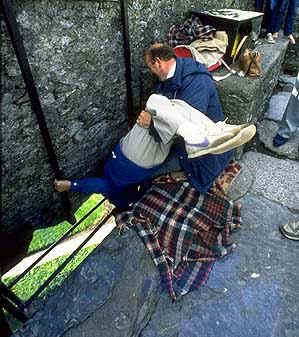 
Five miles north west of the small city of Cork is the village of Blarney. Near the village, standing almost 90 feet in height is the castle of Blarney with its world-famous Blarney Stone. More than 300,000 people come to kiss the Blarney Stone each year, in the hopes of gaining more eloquent speech.

While the Blarney Castle that visitors see today was constructed in 1446, the history of the place goes back two centuries before that time. The story begins with a magical stone, its origins shrouded in mystery. One legend says it was the rock that Moses struck with his staff to produce water for the Israelites during their exodus from Egypt. Another legend relates that it had once been Jacob’s Pillow and that the prophet Jeremiah had brought it to Ireland. According to this telling it became the Lia Fail, or ‘Fatal Stone’ and was used as an oracular throne of the Irish kings.

Some, however, believe it was the Stone of Ezel, which David hid behind on Jonathan's advice, while fleeing from King Saul, and that it was brought to Ireland during the Crusades. Yet it may have once been the Coronation Stone of Scottish monarchs and later used by St. Columba as a traveling altar during his missionary activities throughout Scotland. After Columba’s death it had been brought to Ireland where it served as the Stone of Destiny, the prophetic power of royal succession.

Did Moses, Jacob, the Scottish Kings or St. Columba first use the stone? Probably this will never be known. The most commonly accepted story of the stone is that, in gratitude for Irish support at the battle of Bannockburn in 1314 (a Scottish defeat of the English), Robert the Bruce gave a portion of the stone to Cormac McCarthy, King of Munster. Installed at Cormac McCarthy’s stronghold, Blarney Castle, it became known as the Blarney Stone. A century later, in 1446, King Dermot McCarthy then installed the stone in an enlarged castle he constructed.

The building of the Blarney Castle was a prodigious affair, requiring many hands and several years. The castle would have been used not only by the McCarthy clan but also by their retinue of knights and retainers. A powerful stronghold, it was designed to provide safety in times of attack, one of which happened in 1646 when Oliver Cromwell attacked Ireland and had a devastating effect on the castle.

Yet the McCarthy’s were not only powerful leaders and warriors, they were also patrons of Irish culture, music and art. They established a Bardic School at Blarney, which attracted scholars from throughout Ireland. By the 1600’s Blarney had become well known as a Court of Poetry where poets gathered to read their compositions, many of which have survived in the original Irish form.

Kissing the Blarney Stone is for some people a difficult physical feat. In past times, to kiss the Stone people were hung by their heels over the edge of the parapet. One day a pilgrim broke from the grasp of his friends and went hurtling downward to certain death. Since that time the stone has been kissed by another method. First, you sit with your back towards the stone and then someone sits upon your legs or firmly holds your feet. Next, leaning far back and downward into the abyss while grasping the iron rails, you lower yourself until your head is even with the stone to be kissed.

Just how long this custom has been practiced or how it originated is not known. One local legend claims that an old women, saved from drowning by a king of Munster, rewarded him with a spell, that if he would kiss a stone on the castle's top, he would gain a speech that would win all to him.

It is known, however, when and how the word Blarney entered the English language and the dictionary. During the time of Queen Elizabeth I, Dermot McCarthy, the ruler of the castle, was required to surrender his fortress to the Queen as proof of his loyalty. He said he would be delighted to do so, but something always happened at the last moment to prevent his surrender. His excuses became so frequent and indeed so plausible that the official who had been demanding the castle in the name of the Queen became a joke at the Court. Once, when the eloquent excuses of McCarthy were repeated to the Queen, she said "Odds bodikins, more Blarney talk!" The term Blarney has thus come to mean 'the ability to influence and coax with fair words and soft speech without giving offense'.

Echoing the power of the stone, Francis Sylvester Mahony, an Irish bard of the early nineteenth century, wrote:

There is a stone there, that whoever kisses,

'Tis he may clamber to a lady's chamber,

Or become a member of Parliament.