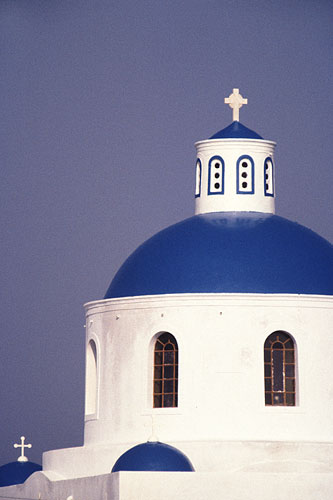 
The southernmost of the islands in the Cyclades group, Santorini is also called Thira in Modern Greek and was known as Calliste, meaning Most Beautiful, in antiquity. Currently having an area of only 29 square miles (76 sq km), Santorini is the small remaining eastern part of an enormous exploded volcano. The island was occupied well before 2000 BC but the volcanic eruption occurring sometime around 1400 BC destroyed the island's culture. Volcanic debris also landed on the island of Crete, 75 miles (125 km) to the south, largely destroying the Minoan civilization. It has been suggested by some writers that the story of the lost continent of Atlantis may stem from an Egyptian account of this disaster but this is surely not possible as Atlantis was known to be a far larger landmass than the small island of Santorini and was also known to be geographically stationed somewhere beyond the Pillars of Hercules (the straits of Gibraltar at the western opening of the Mediterranean Sea).

Santorini is best known today as one of the most popular Greek destinations for international tourism. While tourists do indeed frequent the major towns, beaches and taverns, the less visited parts of the island remain places of traditional culture. Scattered about the island's rocky hills are numerous churches and chapels such as those shown in the photographs. 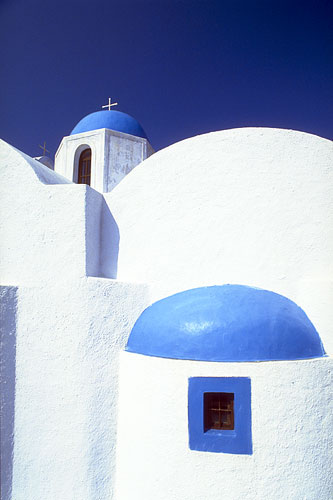