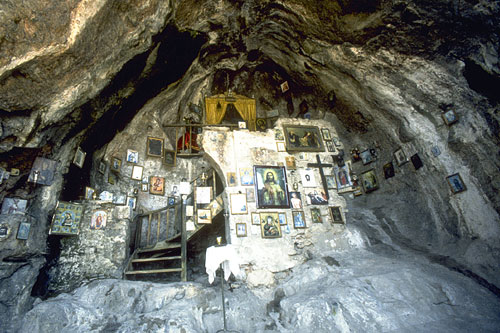 Spring and shrine of Asklepios at the Acropolis
Athens, Greece


Beneath the Parthenon, on the southern cliffs of the Acropolis, is a sacred spring in a small cave. While details of its earliest use and deities are lost in antiquity, it is known that the spring became the focal point of a sanctuary to the healing god Asklepios by the 5th century BC. The sacred spring of Asklepios was converted into a Christian place of worship by the 6th century AD and rededicated to the Aghioi Anargyroi, or Doctor Saints. Below the cave and spring shrine are extensive ruins of other temples to Asklepios and also of Hygieia, the goddess of health.

The Greco-Roman god of healing, Asklepios was the son of Apollo and the nymph Koronis (born to them in the temple of Apollo in Epidauros) and was taught the art of healing by the centaur Chiron. The cult of Asklepios spread from the island of Kos (home of the famous physician Hippocrates) throughout Greece and Asia Minor. In the classical and Hellenistic periods, many cities and towns had sanctuaries dedicated to Asklepios, but there were particular sites that had a greater prominence than others, including Epidauros in mainland Greece, Kos in the Aegean, Trikka in Thessaly, Pergamon in Asia Minor, and Lebena in southern Crete. Each of these healing sanctuaries drew large numbers of pilgrims from distant parts of the Greek world for well over one thousand years.

The temples of Asklepios were always associated with sacred springs, whose waters carried the healing powers of the Earth spirits. Because it was believed that Asklepios effected cures of the sick in dreams, those patients seeking the god's help first drank and bathed in the waters of his spring and then slept within the temple precincts (called an abaton). During dreams, Asklepios or his serpents would appear to the sick, giving them clues regarding their healing. The means by which cures were effected were abstinence from food before and during the time in the abaton, ritual bathing, sacrifice, incubation, dreams, and then healing. While priests were present at the shrines, they did not function as doctors nor is there any evidence for medical treatment in any of the Asklepion. Those persons who received cures at the Asklepieia recovered through their faith in Asklepios, through the therapeutic suggestions they received in dreams, or simply in the natural course of events.

Patients in Asklepion shrines also participated in rituals involving snakes, which were believed to be assistants of the healing god. Asklepios is frequently shown standing with a long wooden staff, around which is entwined a large snake. This staff, symbolizing the tree of life, and its coiling snake represent the mysterious healing powers of the primal earth and are themselves remnants of pre-Grecian cults that worshipped the Earth. A somewhat similar symbol, the caduceus, a winged staff with two twined serpents, is frequently but incorrectly used as a medical emblem. Without medical relevance, the caduceus instead represents the magic wand of Hermes, or Mercury, the messenger of the gods and the patron of trade.