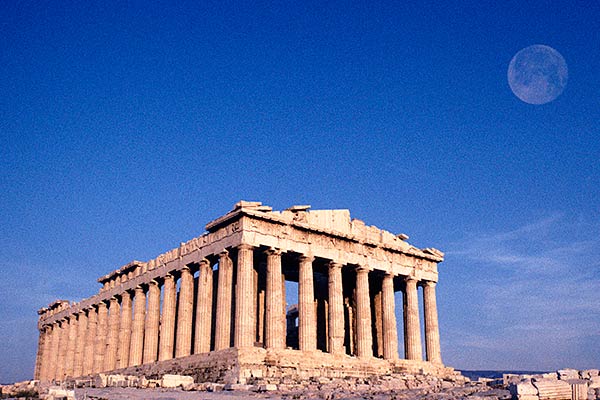 Moonrise over the Parthenon, the Acropolis, Athens, Greece (Enlarge)


Similar to many other holy places, the origins of the sacred use of the great limestone rock rising from the Attic plain are unknown to us. They were forgotten long before the writing of the first recorded histories of Athens. Neolithic remains discovered on the slopes of the Acropolis indicate a continuous settlement on the hill from at least 2800BC, well before the Minoan and Mycenean cultures that later gave birth to the archaic Greek. In the Mycenean period (1600-1100 BC) the summit was surrounded by a massive fortification wall, which protected the palace-temple of the Mycenean priest-kings. The earliest known Hellenistic structures, dating from the 6th century BC, were two large temples dedicated to Athena, on hill top positions which had probably contained older shrines before them. In 480 BC the Persians destroyed these temples and in 447 BC (some sources say 438 BC) the Athenian leader Pericles initiated construction of the presently standing temple of Athena. Built by the architects Ictinus and Callicrates under the supervision of the sculptor Phidias, the temple is generally considered to be the culmination of the development of the Doric order, the simplest of the three classical Greek architectural styles. The rectangular building (measured at the top step of its base to be 101.34 feet wide by 228.14 feet long) was constructed of brilliant white marble, surrounded by 46 great columns, roofed with tiles, and housed a nearly 40 foot tall statue of the goddess Athena. The statue, known as Athena Promachos, Athena the Champion, was made of wood, gold and ivory and could be seen from a distance of many miles.

While much of the structure remains intact, the Parthenon has suffered considerable damage over the centuries. In 296 BC the gold from the statue was removed by the tyrant Lachares to pay his army; in the 5th century AD the temple was converted into a Christian church; in 1460 it housed a Turkish mosque; in 1687 gun-powder stored by the Turks inside the temple exploded and destroyed the central area; and in 1801-1803 much of the remaining sculpture was sold by the Turks (who controlled Greece at the time) to the Englishman Lord Elgin, who roughly removed the sculptures and sold them to the British Museum. Today, the automobile exhausts, industrial pollution, and acid rain of Athens are rapidly destroying the few remaining sculptures of this once great work of art. A substantial admission price is paid by the hundreds of thousands of tourists who visit the site each year. Little of this money however, is used for the preservation of the Parthenon but is instead wasted away by corrupt bureaucrats and government officials.

The name Parthenon refers to the worship of Athena Parthenos, the 'Virgin Athena' who issued fully grown from the head of her father Zeus. The maiden goddess and patroness of Athens, she represents the highest order of spiritual development and the gifts of intellect and understanding. Pure in body, mind and heart, Athena is the symbol of the universal human aspiration for wisdom. It was not only the character and statue of the goddess that symbolized these qualities however, but also the precise topographical location and astronomical orientation of her shrine, and the sacred geometry that infused the entire temple. Though a discussion of these matters is too long to offer in this section, let us read a few passages from Vincent Scully, one of the more enlightened scholars studying Greek sacred architecture.

"The historic Greeks partly inherited and partly developed an eye for certain surprisingly specific combinations of landscape features as expressive of particular holiness. This came about because of a religious tradition in which the land was not a picture but a true force which physically embodied the powers that ruled the world......All Greek architecture explores and praises the character of a god or group of gods in a specific place. That place is itself holy and, before the temple was built upon it, embodied the whole of the deity as a recognized natural force. With the coming of the temple, housing its image within it and itself developed as a sculptural embodiment of the god's presence and character, the meaning becomes double, both of the deity in nature and the god as imagined by men. Therefore, the formal elements of any Greek sanctuary are, first, the specifically sacred landscape in which it is set and, second, the buildings that are placed within it.......We must now go further to recognize that, not only were certain landscapes indeed regarded by the Greeks as holy and as expressive of specific gods, or rather as embodiments of their presence, but also that the temples and the subsidiary buildings of their sanctuaries were so formed in themselves and so placed in relation to the landscape and to each other as to enhance, develop, complement, and sometimes even to contradict, the basic meaning that was felt in the land."

Francis Penrose, a British archaeologist studying the Parthenon in 1891, suggested that the site is oriented towards the rising of the Pleiades in the constellation of Taurus.