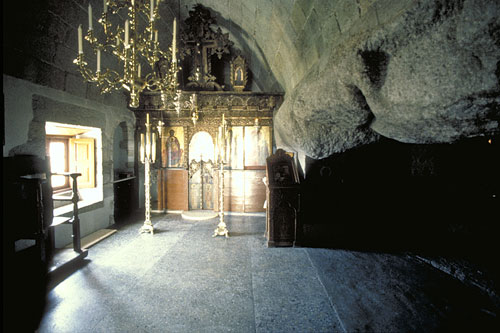 
One of the original twelve, or Dodecanese, Greek islands, Patmos is rich in both history and natural beauty. The small, hilly island (34.6 square kilometers) was populated from as early as 500 BC by Dorians, next the Ionians, and then the Romans from the 2nd century BC. The earliest known temples on the island were the 4th century BC sanctuary of the goddess Diana and a temple of Apollo. Scholars suspect that the name Patmos may derive from Latmos or Mt. Latmos of Turkey, where the goddess was worshipped (Diana is the Roman name for Artemis, Apollo's sister). During the period of Roman rule the island fell into decline, the population decreased, and the island was used as a place of banishment for criminals and political and religious troublemakers. In 95 AD, St. John the Theologian - one of the twelve disciples of Jesus - was sent into exile on the island. St. John remained on the island for eighteen months during which time he lived in a cave below the hilltop temple of Diana. In this cave exists a fissure, or small hole in the rock wall, from which issued a series of oracular messages that Prochoros, a disciple of St. John, transcribed as the Biblical chapter of Revelations. During his time in the sacred cave, now known as the Holy Grotto of the Revelation, St. John also composed the Fourth Gospel.

In 313 AD, Christianity was officially recognized as the religion of the Roman Empire and from this time the new faith spread rapidly throughout the Greek islands. The eastern Christian empire of Byzantium exercised control over the isle of Patmos and in the 4th century the remains of the ancient shrine of the goddess Diana were used by monks to construct a church dedicated to Saint John. This church was erected directly upon the foundations of the earlier temple of Diana. Sometime between the 6th and 9th centuries the church was destroyed when the island was subjected to frequent raids by the Arabs. Left deserted after these raids, Patmos next entered history in 1088 when a Byzantine emperor granted the island to the monk Christodolous, whose intention it was to establish a monastery. Built upon the remains of the old church and the older shrine of Diana, the monastery of St. John has been in continuous operation for over 900 years. Subjected to raids by Saracens and Norman pirates during the 11th and 12th centuries, the monastery was frequently enlarged and fortified, giving it the castle-like appearance it retains today. In the monastery exist some of the oldest and most accurate transcriptions by early Greek philosophers, including Aristotle. The small town of Hora surrounding the monastery dates mostly from the mid 17th century and its labyrinthine street arrangement was purposefully designed to confuse pirates intent on raiding the town and monastery.

It is not the purpose of this essay to discuss the Biblical chapter of Revelations, a text that has suffered numerous deletions, additions and changes since its supposed writing by St. John (some of these resulted from the difficulty of translating Greek into English and other languages). Rather, the author wishes to draw attention to the matter of particular places upon the earth where human beings have seen precognitive visions or received messages regarding the future. Virtually all of the world's religious traditions have legends concerning such places and this universality points to a mystery which neither the theologians of those religions nor the scientific community have yet been able to explain. What is the reason that some people, while spending time at these places, somehow appear to see into the future? Is it the power of the local earth spirits, a geophysical anomaly, the presence of a divinity or angel, the spiritual development of the person involved, or a combination of all of these factors? Interestingly, one common denominator that links nearly all the precognitive visions and revealed messages associated with such sacred sites is their concern (however metaphorically it may be expressed) with the continuation and protection of life upon the planet. The author's speculation regarding this matter is that the Earth is a conscious being that communicates, to particularly receptive humans, information of importance to those humans and their communities. To one degree or another, many of the readers of this web site will have had such experiences. Whether those communications come at a recognized sacred site or a personal power place, whether they come as messages pertinent to an individual or the greater human family, and whether their source be interpreted as having an angelic, terrestrial, or intuitional origin, the fact is undeniable that we humans often function as communication channels for voices and visions beyond our own minds. 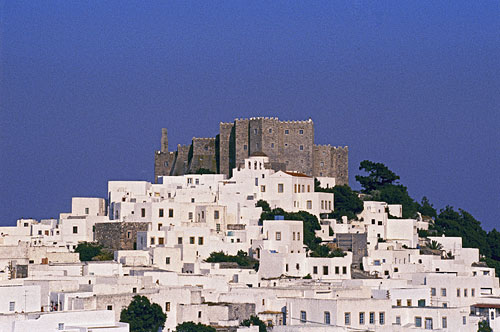 The Monastery of St. John above the village of Hora,
Island of Patmos, Greece 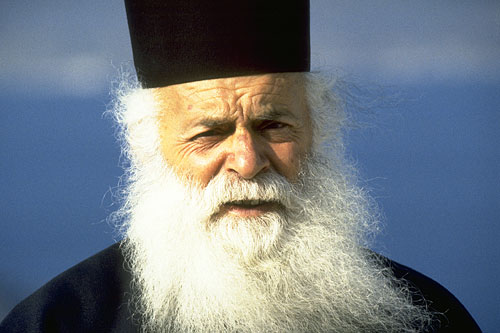