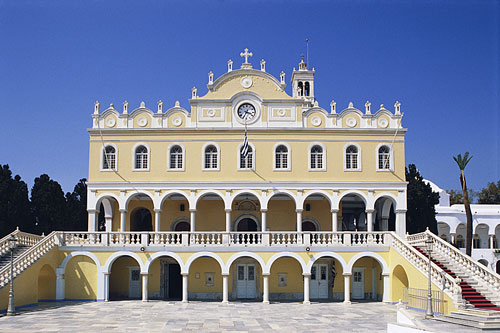 
The windswept island of Tinos, located in the Cyclades archipelago and five hours by ferryboat from Athens, has been settled for well over twenty-five hundred years. An island of many battles and different peoples, mountainous Tinos has been ruled by Ionians, Persians, Athenians, Spartans, Macedonians, Venetians, Franks, Turks, and Russians as well as experiencing the ravages of Arab and Barbary pirates. Now a peaceful island of forty whitewashed villages and more than 700 churches and monasteries, Tinos is famous throughout the Greek Orthodox world for its miraculous healing icon of the Virgin Mary.

In antiquity, Tinos was well known as a sacred place in the eastern Mediterranean, visited frequently for its temples of Poseidon and Dionysos. No historical sources shed light on the initial Christian presence on the island yet it is known that an early church, a Byzantine structure, was built directly upon the foundations of the temple of Dionysos. The middle of the 10th century AD saw the invasion of Muslim raiders, their destruction of the Byzantine church, and the abandonment of the site. Eight centuries later, in June of 1822 at the nunnery of Kechrovounion, a nun by the name of Pelagia had a series of visions of the Holy Virgin. Mary instructed Pelagia to inform the elders of Tinos village that they were to begin excavations in an uncultivated field, where they would find a sacred icon. Excavations began and on January 30, 1823, a worker digging in the soil discovered the icon. Subsequent archaeological excavations have determined the area of the icon's discovery to have been the site of the ancient Byzantine church and, before that, the temple of Dionysos.

The icon, called Panagia Evangelistria, meaning Our Lady of Good Tidings, is a beautiful portrayal of Mary kneeling with her head bent in prayer. Regarded by scholars as being older than the Byzantine period, it may perhaps be the work of the Apostle and Evangelist St. Luke. It is assumed that the icon was a sacred object in the Byzantine church and was hidden or lost around the time of the Muslim invasions. Shortly after the discovery of the icon, the construction of a new church was begun. Before the church was completed in 1830, large numbers of pilgrims had begun to come to the island from throughout Greece. Numerous reports of miracles of healing rapidly increased the fame of the Church of the Megolohari, with the result that today the sacred icon is the most venerated pilgrimage item of the Greek nation. Four major festival days are celebrated at the shrine: January 30, the anniversary of the finding of the icon; March 25, the Annunciation of Mary; July 23, the anniversary of the vision of the nun Pelagia; and August 15, the Assumption of Mary. On each of these days the normally quiet town of Tinos is filled with many thousands of celebrating pilgrims. I have lived for a number of months on the island and found it one of the most peaceful places of all the many sacred sites I have visited. Besides the Church of the Megolohari, the tallest peak on Tinos, Mt. Prophet Elias, is also a fine place to spend a day of quiet meditation.

Readers interested in more detailed information on the Island of Tinos and its pilgrimage tradition will enjoy the excellent anthropological study by Jill Dubisch: In a Different Place: Pilgrimage, Gender, and Politics at a Greek Island Shrine. 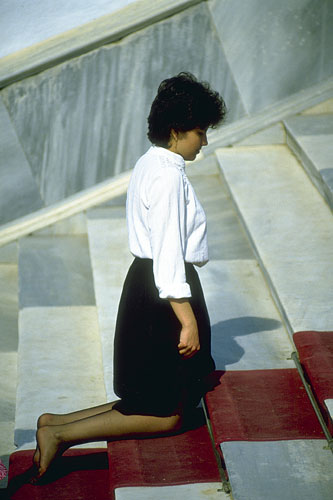 Pilgrim at the Church of the Megalohari, Tinos Island, Greece 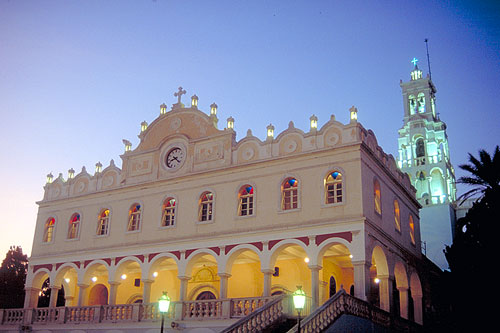