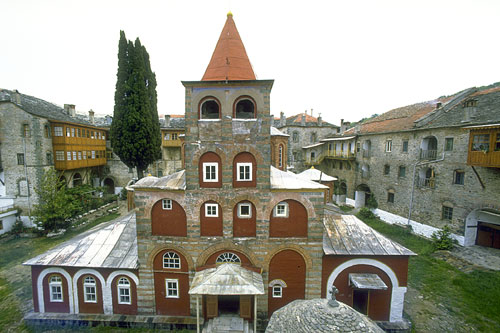 
A thickly forested, mountainous ridge thirty miles long and two to five miles wide, Athos is the easternmost of the three promontories of the Halkidiki peninsula in northern Greece. Known as Agion Oros, or the 'Holy Mountain' in modern Greek, Athos is a semiautonomous republic of the Greek Orthodox church. Many hundreds of monks inhabit twenty large monasteries, smaller monastic houses and remote mountain caves. The religious history of Athos goes back long before the birth of Christianity however. The great marble peak of Mt. Athos (6670 feet, 2033 meters) was mentioned as early as Homer and Aiskhylos as being the first home of the Greek gods Zeus and Apollo before they moved to Mt. Olympus. Pagan hermits have lived in the deep forests since prehistoric times for it was known then, as it has been forgotten now, that places where the ancient gods had lived still held great powers for humans.

According to legends told by the monks of the Athonite monasteries, the Christian history of Mt. Athos begins with the Virgin Mary. In 49 AD, Mary set sail for the island of Cyprus to visit her friend Lazurus. During her journey a great storm arose and Mary's ship, blown far off course, was guided by divine signs to a protected bay on the eastern coast of Athos. Gazing upward at the towering mountain and its beautiful forests Mary declared, "This mountain is holy ground. Let it now be my portion. Here let me remain." Mooring her boat near the site of the present day monastery of Iveron, Mary came upon an ancient temple and oracle dedicated to Apollo. As she stepped ashore a great crashing sound resounded across the peninsula and all the idols and pagan statues came crashing to the ground (it is interesting to note that a well documented earthquake occurred in northern Greece in 49 AD). The great stone statue of Apollo spoke out, declaring itself a false idol and calling the forest hermits of Athos to come and pay homage to the Panaghia, the true mother of God. So the legend goes, Mary baptized the hermits and thus began the glorious Christian history of Mt. Athos.

According to historical sources however, Athos first became a refuge for Christian hermits and anchorites in the 6th and 7th centuries, and during the 8th and 9th centuries these hermits began to gather together into small monastic communities. The era of the great monastic establishments began with the founding in 963 AD of the first and most renowned of the monasteries, the Great Lavra, on the southeast coast of Athos. Under the protection of the Byzantine emperors, the building of monasteries flourished until, at its zenith in the 15th century, Mt. Athos harbored 40 monasteries and some 20,000 monks. When the Turkish armies captured nearby Thessaloniki in 1430, the monastic community prudently surrendered, thus remaining unplundered and relatively autonomous. The long period of Turkish rule brought about a decline and impoverishment of the monasteries that was later somewhat alleviated by the patronage of the Russian tsars in the 19th century. In 1926, a decree by the Greek government made the Monks Republic an official part of Greece while allowing it to retain an autonomous theocratic government. Since the 1950's there has been a gradual reawakening of interest in the monastic life and currently more than 3000 monks live amongst the monasteries and forest hermitages of Athos.

Most of the monasteries are along the coastal lands and consist of a quadrangle of buildings enclosing a church. The churches contain some of the finest examples of Byzantine art, icons and treasure, and the monastery libraries hold a vast number of classical and medieval manuscripts. There are 17 Greek monasteries, 1 Russian, 1 Bulgarian, and 1 Serbian. While a few of the Greek monasteries have basic electricity, most function very much as they did in medieval times. The monks grow their own food, spend long hours each day in prayer, and rarely venture off the peninsula. The author has spent time in 17 of the 20 monasteries and finds Mt. Athos to be one of the most wonderful sacred places he has visited in the world.

An edict of the Emperor Constantine Manomachos in the year 1060, enforced to this day, forbids women from setting foot on the peninsula. This stringent exclusion of females applies to domestic animals as well. While some readers may deem the original edict foolish and its continued enforcement to perpetuate anachronistic patriarchal attitudes, it is important to note that Athos is one of the very few remaining places on the entire planet that has resisted the relentless culture-destroying machines of 'modernization' and 'social liberty'. Furthermore it is interesting to note that the entire peninsula of Athos has preserved a richness and luxuriance of vegetation unique in Greece and all of Europe. For nearly ten centuries the fields have lain ungrazed by cattle, the trees have escaped the ravages of goats, and the flowers have been unpicked. In a world so rapidly being destroyed and homogenized by the 'culture of progress' it is, for this author at least, refreshing to know that at least a few ancient human ecosystems are left intact and relatively undisturbed. The so-called 'enlightened' attitudes of science and democracy have neither promised nor provided this. Greek Orthodox monasticism, on the other hand, has done so and, in the process, has protected a place with a rare, enchanting and powerful presence of peace. 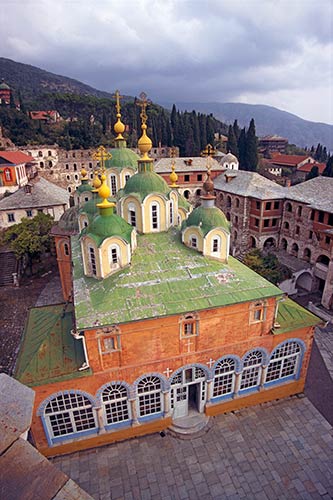 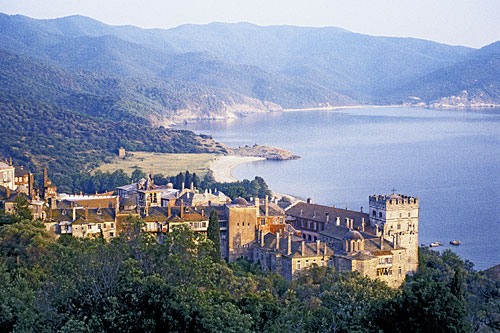 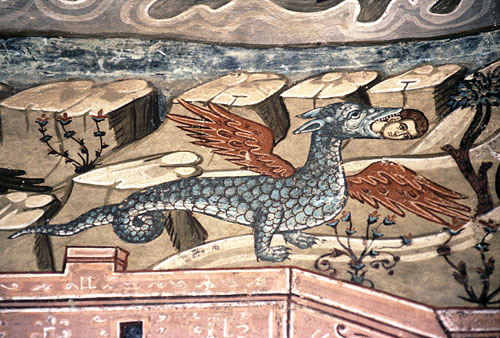 Wall painting from an Athonite monastery 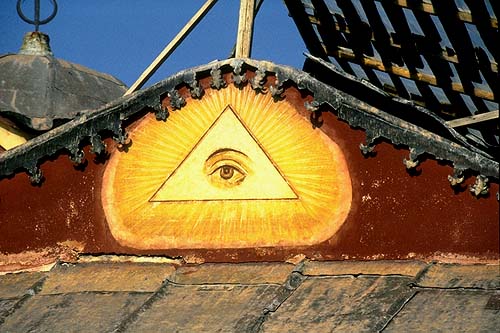 Painting from an Athonite monastery