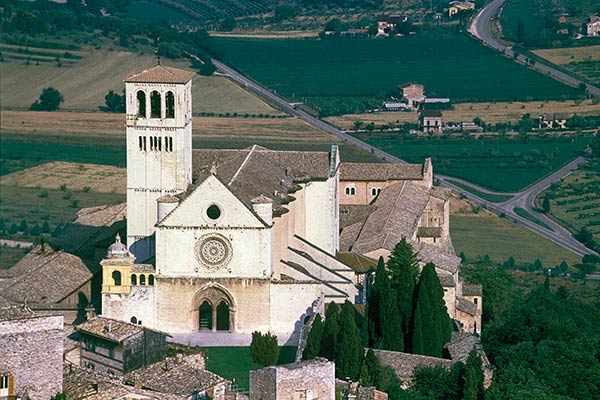 
Approximately 90 miles north of Rome, in the rolling hills of Umbria, stands the exceptionally well-preserved medieval town of Assisi. Known primarily as the birthplace of St. Francis (1182-1226 AD), the town has been a sacred place since long before the Franciscan era. Little is known regarding the original founding of the town. One legend tells that the ancient town, called Assisium, came into existence around a holy spring that was later venerated by the Etruscans (9th - 5th centuries BC) and, following them, by the Romans. Another legend tells that the town was begun by Dardanus 865 years before the founding of Rome (April 21, 753 BC). Sometime in the 1st century BC a temple of Minerva, the Roman goddess of art, handicrafts and the professions, was constructed at the sacred spring. During the early Christian era the sanctuary of Minerva was destroyed, a series of churches were erected at the site, and the sacred spring stopped flowing. Subject to the dukes of Spoleto in the early Middle Ages, the town of Assisi became an independent commune in the 12th century and was involved in disputes and battles with nearby Perugia before passing to the Papal states. It became part of the Italian kingdom in 1860.

St. Francis was born in Assisi in 1182 (some sources say 1181), the son of a well-to-do cloth merchant. A lively, even riotous youth who dreamed of achieving military glory, Francis abandoned his worldly ambitions at the age of 19 while a prisoner of war in Perugia. He thereafter became a mystic who experienced visions of Christ and Mary, composed the first poems in the Italian language about the beauties of nature, and in 1210 founded the famous order of mendicant friars known as the Franciscans. His repudiation of the worldliness and hypocrisy of the church, his love of nature, and his humble, unassuming character earned him an enormous following throughout Europe, posing an unprecedented challenge to the decadent Papacy. Francis was the first known Christian to receive the stigmata, the spontaneously appearing wounds on the hands, feet and side of the body corresponding to the torments of Christ on the cross. These injuries caused Francis great pain and suffering, but he bore them with his characteristic serenity, keeping the matter secret for many years so as not to draw attention to himself and away from god.

The Basilica of San Francesco, one of Italy's foremost monuments, was built between 1228 and 1253 AD. The short period of its construction, rare for a church of this size, is often explained as a measure of the great love that the people of the time had for St. Francis. By the mid 1400's pilgrims were flocking to Assisi from all parts of Europe and today the walled medieval town and its grand basilica are among the most visited of Christian shrines. The author, during his extensive travels to the sacred sites of the world, has frequently perceived that certain places have a distinct feeling, presence, or energy of peace. Assisi is one of these places. The entire town and particularly the Basilica have a definite atmosphere of peacefulness that awakens and stimulates that same characteristic in the human heart. In this regard it is perhaps more fitting to call such sacred sites empowerment places rather than power places. 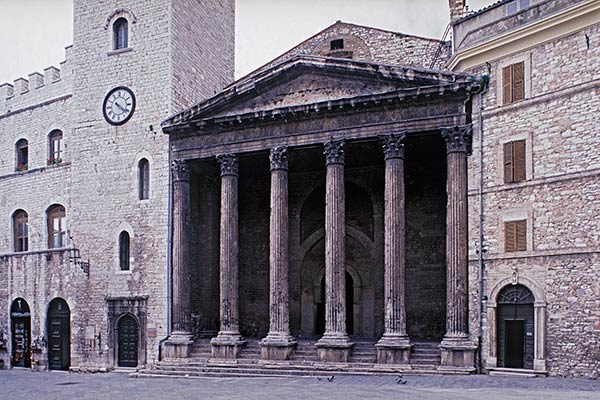 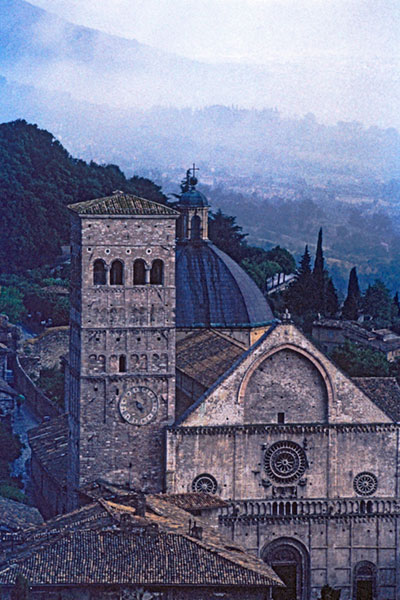