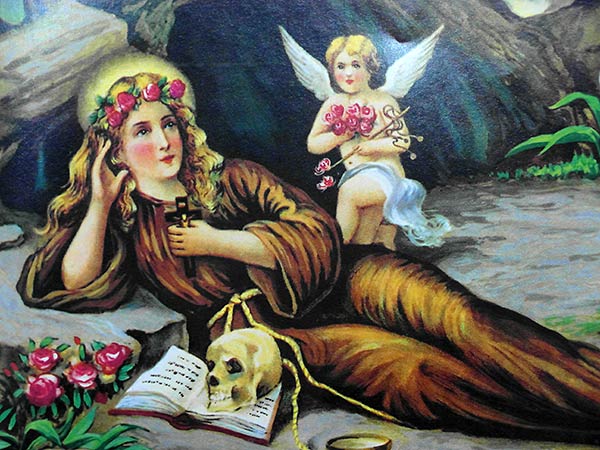 Perched 445 meters (1460 feet) above the Tyrrhenian Sea and the city of Palermo in northwestern Italy, the cave sanctuary of Santa Rosalia Monte Pellegrino is one of Sicily’s two primary Catholic shrines. Archaeological evidence indicates the cave had pre-Christian religious uses, including an ancient temple to the Anatolian (and later Greek) Earth goddess Cybele, the Carthaginian god Kronos, and Tanit, the Phoenician Punic goddess of fertility.

While the first known traces of Christian worship are found from the seventh century when a small church of the Virgin Mary was situated in the cave, the main reason for Christian pilgrimage is the sanctuary of Santa Rosalia. Now the patron saint of Palermo, Rosalia was born of a Norman noble family, she lived from 1130 to 1166, and was (according to tradition) the maid of Queen Margherita, the wife of King William of Sicily. Devoutly religious, she retired for the final eight years of her life to the cave of the Madonna on Monte Pellegrino.

Four hundred years later, in May of 1624, a boat arrived in Palermo carrying the Black Death, a deadly plague. An epidemic spread throughout the city causing thousands of deaths. In February of 1625, Rosalia appeared to a man and indicated where her remains were to be found in the cave of the Madonna. She instructed him to bring her bones to Archbishop Giannettino Doria of Palermo and to have them carried in procession through the city. The man climbed the mountain and found Rosalia’s bones in the cave as described. Soon word of the discovery spread, large numbers of people began to visit the cave, and many miraculous healings occurred. The bones were then taken to the Archbishop. Once they were carried around the city three times on June 5th (some sources say the 9th) the plague ceased. On July 27, Saint Rosalia was proclaimed as the patron saint of Palermo. The construction of a sanctuary that encompasses the cave began in 1626 and was completed in 1629, when Pope Urban VIII officially confirmed the sanctity of Rosalia.

Rosalia is also called La Santuzza, or the Little Saint, by the people of Palermo and each year her shrine is visited by tens of thousands of pilgrims. The focal point of the shrine is a statue of Rosalia made of gold and white marble, ornamented with many precious stones. Rosalia reclines, holding her own skull in her hand, and a pickaxe for breaking her way through rocks in the cave.

During the month of September the traditional acchianata procession is held, during which many thousands of worshipers climb along an ancient path of 4 kilometers to the mountaintop sanctuary. On the nights of September 3 and 4, both individuals and organized groups pray and sing while ascending the mountain. Each June between the 10th and the 15th, in commemoration of the miraculous procession of June 9, 1625, the people of Palermo celebrate with a grand feast known as U fistinu. On the day of the 14th a chariot holding a statue of Santa Rosalia is paraded through Palermo and a big show of fireworks lights up the night sky. On the 15th there is a solemn procession of the relics of the saint. The mountain shrine is also a place of pilgrimage for the Hindu Tamil community and Saint Rosalia has been proposed as the patron saint of evolutionary studies. 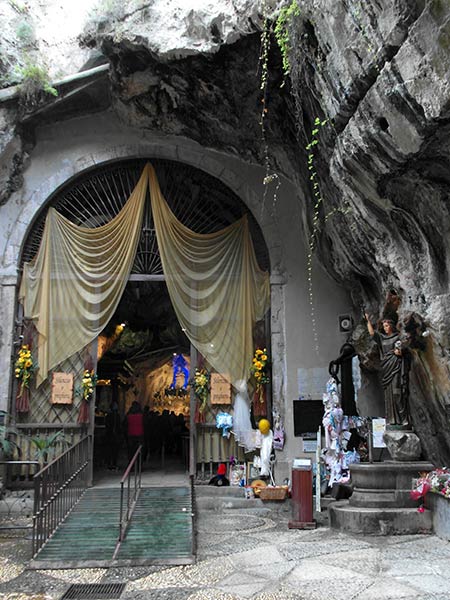 Entrance to the cave shrine of Santa Rosalia, Monte Pellegrino 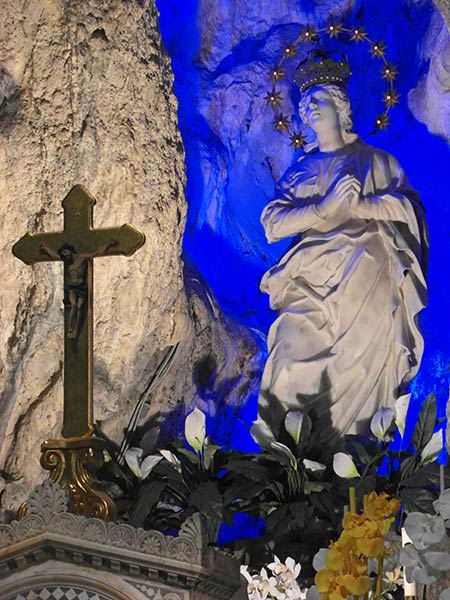 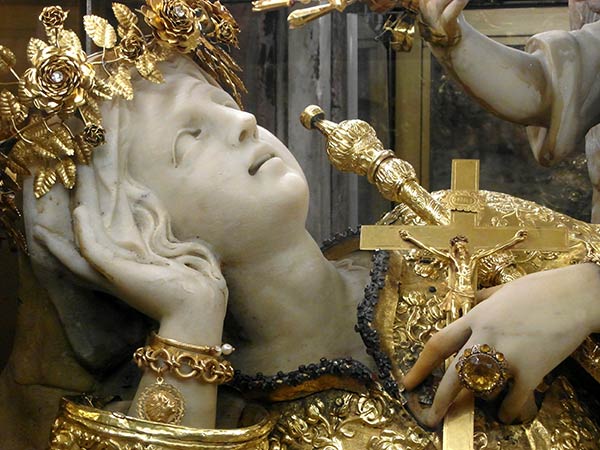 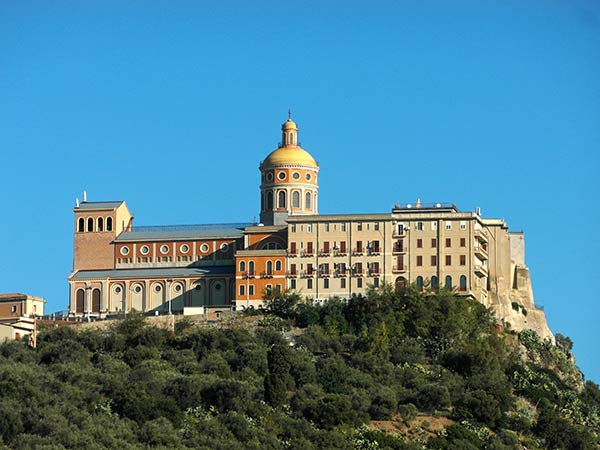 Sanctuary of Maria of Tindari, Sicily

Located approximately 50 miles west of the city of Messina in northeastern Sicily, the Sanctuary of Maria de Tindari is famous for its ancient statue of the Black Madonna. While the exact date of the arrival of the cedar wooden statue is unknown, tradition holds that it was brought sometime towards the end of the eighth century or in the early decades of the ninth century when the Sicily was under the domination of the Byzantine Empire for about three centuries (535-836).

Legends tell of a ship sailing from Constantinople, the capital of the Byzantine Empire, in which was hidden (perhaps being smuggled) a mysterious statue of the dark Mary. While the ship crossed the waters of the Tyrrhenian Sea, a violent storm suddenly arose and the sailors were forced to take refuge in the Bay of Tindari. When the storm subsided, the sailors raised anchor and hoisted the sails but the ship failed to move. Thinking to lighten the ship’s load, they jettisoned some cargo, but still the ship would not move. In desperation they decided to deposit the statue of the Virgin on the beach to see if it was she who prevented their departure. Placing the box with the statue at the base of the cliffs of Tindari and entrusting it to the local abbey for safekeeping, they were finally able to sail away. Villagers from the town of Tindari, already a thriving Christian community, decided to carry the statue to the highest and most beautiful place in the region, where formerly stood a temple dedicated to Ceres, a Roman goddess of agriculture and fertility.

A series of churches were built to house the statue, including one destroyed by Barbarossa, a notorious Algerian pirate in 1544, and the present church was completed in 1979. The statue of Mary holding the baby Jesus was probably carved between the fifth and sixth centuries, and scholars assert that it did not come from either Latin or Byzantine workshops but more probably was fashioned in the Middle East, perhaps in Syria or Palestine. The statue has benefited from extensive restoration; centuries of paint, varnish, smoke and dust had covered the eyes and dulled the original hue of the paint. Inscribed at the base of the statue are the Latin words Nigra sum ​​sed formosa, meaning ‘I am black, but beautiful.’ Similar to the Tindari statue, there are hundreds of other Black Madonna’s throughout Europe (readers interested in learning more about these statues will enjoy the book The Cult of the Black Virgin, by Ean Begg). The feast of Our Lady of Tindari is held annually between the 7th and 8th of September. Inside the large church, if you follow the signs at the back, you will find the smaller, more humble 16th century sanctuary that has breathtaking views of the sea below. This original sanctuary was built on top of the ancient temple to the Earth goddess Cybele. 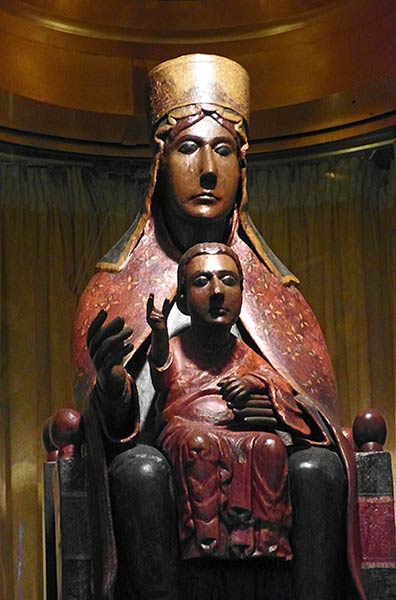 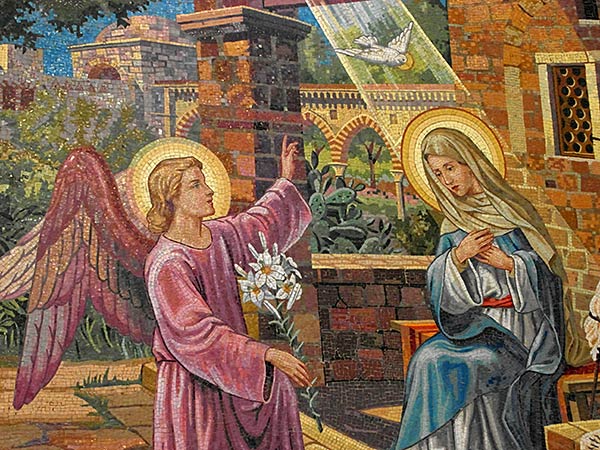