The Holy House of Loreto 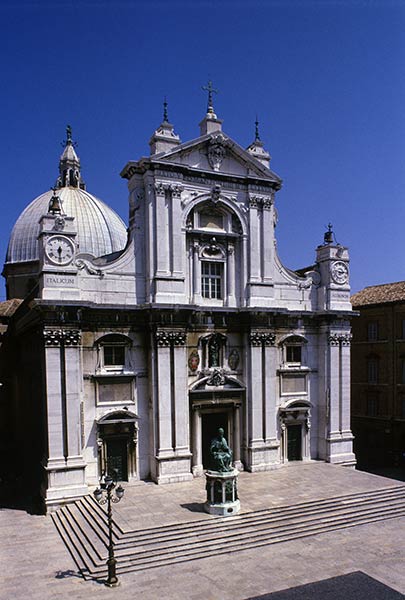 
The Holy House of Loreto is alleged to be the house where Mary was born and raised, and where an angel told her she would be the mother of Jesus. The first historical mention of the ‘Santa Casa’ appears when Helena, the mother of Emperor Constantine, learned of its existence and had a church built around the house in order to protect it. According to a 14th century legend, after the Holy Land came under the control of Islam in 1263, the Holy House was flown by angels to Dalmatia (in modern Croatia) in 1291, where a vision revealed it to be Mary’s house. Three years later, in 1294, it was again transported by angels to Recanati and finally, in 1295, to a laurel grove, the ‘Lauretanum,’ for which Loreto is named. The myth of the Holy House states that when the Holy House was lowered into place the nearby trees bowed down in respect.

Analysis of literary sources, however, indicates that the transport of the Santa Casa happened by sea and not through the assistance of angels. During the medieval period of Christian history it was common for monks and crusaders to be called ‘angels’ by the common people, this explaining the legend of ‘angels’ flying the house from the Holy Land to Loreto. Archaeological evidence and documents uncovered in 1962 suggest that the house may indeed derive from the region of Nazareth as its limestone and cedar construction materials are not available in the area of Loreto.

The Holy House itself is quite small, and its single room with a small altar contains a Black Madonna statue and a blue ceiling with golden stars. In 1469, a large Basilica was built over the Holy House. Having been remodeled and reconstructed numerous times over the ensuing centuries, the Basilica has a Renaissance exterior and a Gothic interior. In 1510 the Santa Casa was approved for pilgrimages, soon became extremely popular in Italy, and by the 16th century was receiving pilgrims from all over Europe. Surrounding the Holy House, and inside the Basilica, is a marble concourse which pilgrims use to circumambulate the shrine. The pilgrims will kneel to make their way around the shrine and the millions who have done this devotional act have worn two shallow troughs with their knees in the hard stone.

During the Middle Ages, the medieval religious belief in Indulgences had a significant role in sponsoring pilgrimages to the holy shrines. For each day spent at the shrine of Loreto, pilgrims believed they were granted a reduction of punishment for their sins. The shrine of Loreto also attracted pilgrims because of the many stories of miraculous healing that occurred over the centuries. In 1920, the Virgin of Loreto became the patroness of pilots because of the legendary transport of the Santa Casa by angels. Each year, on September 8, the birth of the Virgin Mary, groups of pilots gather at the shrine to celebrate, to pray and give thanks for safe air flights, and to participate in a colorful procession. A statuette of Mary accompanied Charles Lindbergh on the first solo airplane flight across the Atlantic and a Loreto medallion was taken on the Apollo 9 mission to the moon.

On December 10, there is a festival celebrating the arrival of the Holy House in Loreto. The Virgin of Loreto is also considered the patron saint of emigrants, and expectant mothers often visit the shrine to pray for protection and blessings of their families. Today Loreto is one of the most visited pilgrimage sites in Europe and an estimated 4 million visitors arrive each year.