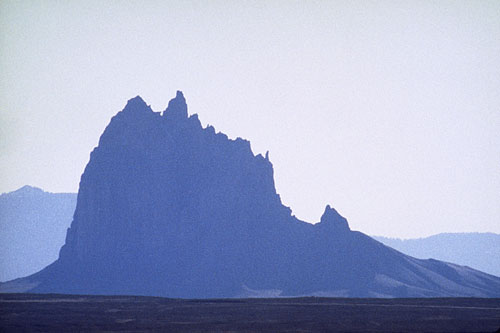 
Known today most commonly by the name Shiprock, the 1700-foot eroded volcanic plume is sacred to the Navahos as Tse Bi dahi, or the Rock with Wings. This name comes from an ancient folk myth that tells how the rock was once a great bird that transported the ancestral people of the Navahos to their lands in what is now northwestern New Mexico. The Navaho ancestors had crossed a narrow sea far to the northwest (the Berring Strait?) and were fleeing from a warlike tribe. Tribal shamans prayed to the great spirit for help. Suddenly the ground rose from beneath their feet to become an enormous bird. For an entire day and night the bird flew south, finally settling at sundown where Shiprock now stands. Geologists tell us the rock was formed 12 million years ago during the Pliocene. The legend of the rock seems more likely to be a metaphor hinting of the site's magical power to lift the human soul above the problems of daily existence into an awareness of the great spirit. From ancient times to the more recent past, Tse Bi dahi was indeed a pilgrimage place of major importance, the destination of young men engaged in the rigors of solitary vision quests. The rock was climbed in 1939. Since 1970, Shiprock has been off limits to climbers, accorded once again the respect due a Navaho sacred place.