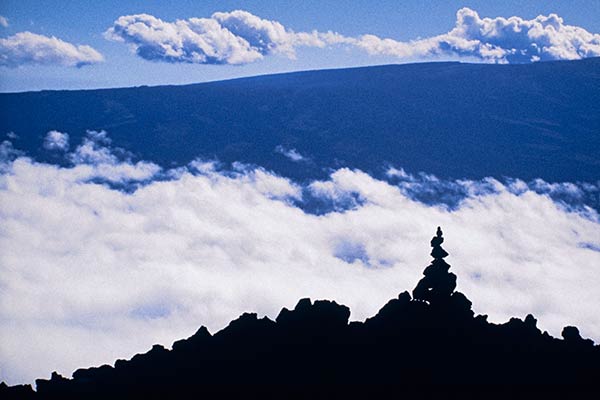 Cairn along pilgrim's path leading up to the Sacred mountain
of Mauna Kea, Island of Hawaii (Enlarge)

Mauna Kea, at 13,796 feet, is the tallest mountain in Hawaii and all of the Pacific Ocean. If measured from its base at the ocean’s floor, 16,000 feet down, it is the tallest in the world. Due to its great weight it has also subsided an estimated 35,000 feet into the crust. Adjacent to Mauna Kea, the cone of Mauna Loa, is only 35 meters lower. Mauna Kea comprises 23% of the island of Hawaii and is its fourth most active volcano. The oldest known rocks are perhaps 237,000 years old and the age of Mauna Kea is estimated to be 1 million years. Mauna Kea is currently dormant and its last eruption was approximately 4500 years ago. Earthquakes occur occasionally on Mauna Kea, which seem to be the result of tectonic faulting rather than the movement of magma. Winter snow falls on the heights, accumulating to many feet, and this has given the peak its indigenous name Mauna Kea, meaning ‘White Mountain.’ Glaciers have existed on Mauna Kea, an estimated three times in the past 100,000 years. Since humans first came to the Hawaiian Islands, Mauna Kea has exerted a powerful spiritual magnetism and pilgrims have often made the long climb up its steep slopes. From the peak, the view is as lovely as any in the world. 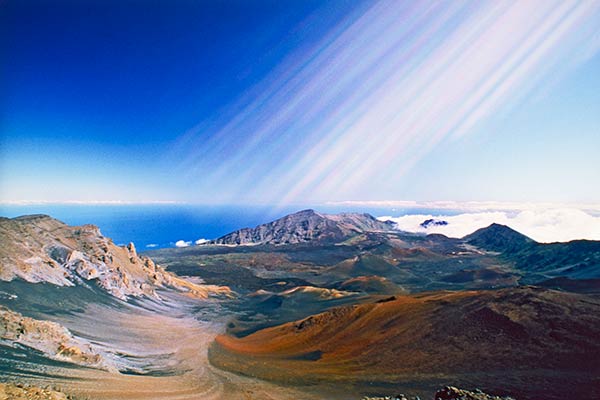 Haleakala is the name of the crater that forms the summit of East Maui Volcano. Maui, one of the younger islands in Hawaiian chain, began as two separate volcanoes on the ocean floor (East Maui volcano probably began its growth about 2.0 million years ago.) Time after time, over great geologic ages, the two volcanoes erupted and spread new sheets of lava upon the older, incrementally building until the volcano peaks finally emerged above the surface of the sea. Then, lava, wind-blown ash and alluvium eventually joined the twin peaks together by an isthmus or valley. Today, Haleakala, the larger eastern volcano, has a height of 10,023 feet (3055 meters) above the ocean and approximately 30,000 feet (9,100 meters) from its base on the ocean floor (97% of Haleakala’s volume is actually below sea level).

Haleakala is often, and incorrectly, said to be the largest dormant volcanic crater in the world, but there are larger volcanic craters, called calderas, elsewhere on the planet. Haleakala is not truly dormant, having last erupted around 1790 (it has erupted at least 10 times since the year 1000), and it is also not a true crater, but rather the remnant of two erosional valleys partially re-filled with lava from more recent volcanic activity. Still, the ‘crater’ of Haleakala is a vast place, large enough to contain all of Manhattan Island. From the rim of the crater a path lead 3000 feet down to miles of hiking trails and cabins available for overnight stays. Haleakala means the ‘House of the Sun’, and originally applied only to the eastern peak. According to Polynesian legend it was here that the demigod Maui captured the sun and forced it to slow its journey across the sky in order to give his people more daylight hours. Before then the sun had moved too rapidly and there was little time to do anything during the day. Today the name Haleakala is applied to the entire mountain. Archaeological studies of several small temples and altars within the crater indicate that Hawaiian peoples venerated Haleakala since at least 800 AD.