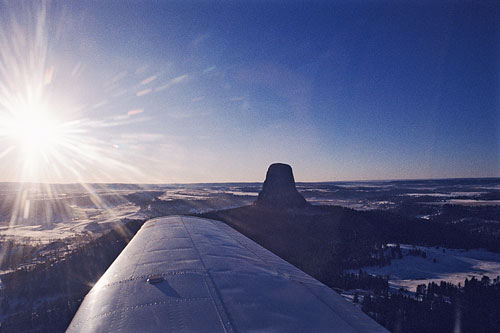 
Brought to international attention by the hugely popular movie, Close Encounters of the Third Kind, Devils Tower has been a sacred place of numerous Indian tribes since prehistoric times. Various legends are told about the origin of the tower. One story, common to the Kiowa, Arapaho, Crow, Cheyenne and Sioux tribes, concerns a group of seven small girls pursued by a giant bear. According to this legend, the girls were one day playing in the forest. A great bear came upon them and gave chase. The girls swiftly fled through the trees but the bear slowly gained on them. Recognizing the hopelessness of their situation, the girls jumped upon a low rock and prayed loudly to the Great Spirit to save them. Immediately the small rock began to grow upwards, lifting the seven girls higher and higher into the sky. The angry bear jumped up against the sides of the growing tower and left deep claw marks, which may be seen to this day upon the rock walls. The tower continued to soar towards the sky until the girls were pushed up into the heavens, where they became the seven stars of the Pleiades.

Known to the Indians as Mateo Tepee or Grizzly Bear Lodge, the tower is actually the remnant of a volcanic extrusion that occurred 60-70 million years ago. Rising some 1,200 feet above the nearby Belle Fourche River, the tower was first seen by white explorers during a US. Geological Survey in 1875. The surveyors called the rock Devils Tower after an old Indian name, The Bad God's Tower. It was first climbed, using a long wooden ladder attached to the rock face, on July 4th, 1893. Proclaimed the first US National Park by President Theodore Roosevelt in 1906, the tower is today a popular climbing site and over 20,000 ascents have been made. Jutting magnificently out of the relatively flat surrounding terrain, the tower was a greatly honored vision quest site of the Indians. Its use in this regard has continued to the present time, for both Indians and non-Indians, and many visitors have reported seeing strange light phenomena and UFO's flying about the tower's summit. 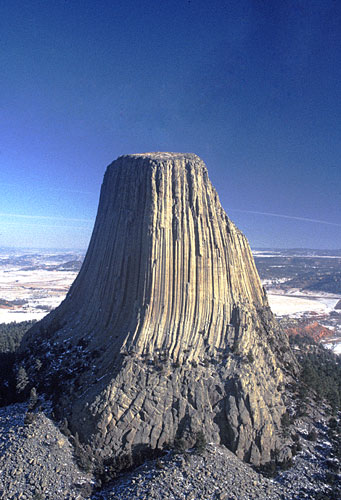 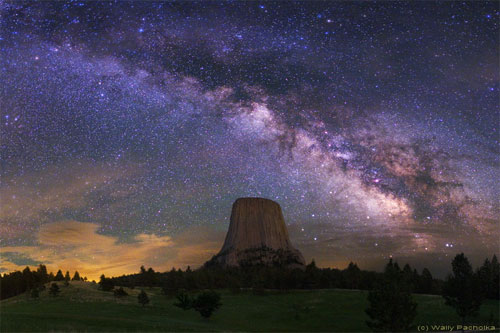