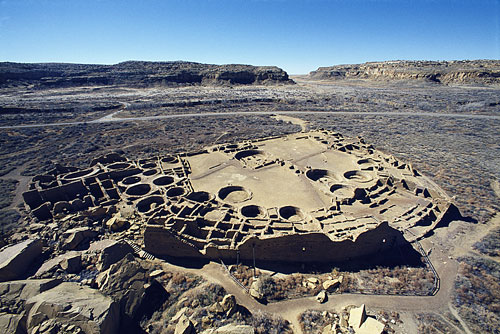 
Deep in the remote deserts of northwestern New Mexico lie the extensive ruins of the greatest architectural achievement of the northern American Indians. Known as the Chaco Canyon complex, the site was the main social and ceremonial center of the Anasazi culture. We do not actually know what these people called themselves; the word Anasazi is a Navaho word meaning variously "the ancient ones" or "the enemies of our ancient fathers." The early Anasazi (100 BC.) were nomadic hunter-gatherers ranging over great expanses of territory; by AD 700 they had begun to live in settled communities, of which Chaco Canyon is the finest example. Intensive construction occurred throughout Chaco Canyon from AD 900 to 1100, resulting in the development of several sophisticated dwelling complexes. Pueblo Bonito (meaning "pretty village" in Spanish; the original Anasazi name being unknown) had more than six hundred rooms, numerous two- and three-storey buildings, several ceremonial structures called kivas, and a population between 800 and 1200 persons. From tree-ring dating, it is known that a period of great drought came upon the Chaco area in AD 1150, causing the abandonment of the site. Rediscovered in 1849 by U.S. Army soldiers, the site was severely vandalized for seventy years until it was made a national monument in 1907. In 1920, National Geographic Society began a thorough reconstruction of the site.

Radiating out from the Chaco complex are an enigmatic series of straight lines that extend ten to twenty miles into the desert. Conventional archaeological theories explain these lines as roads leading to outlying settlements, but this seems highly unlikely, as the lines are arrow straight regardless of terrain. They go over mesas (table-top mountains), up and down vertical cliff faces, and along ways that make them utterly impractical for use by the casual or commercial traveler. Perhaps they had another purpose. Paul Devereux, a British scholar and writer in the so called "Earth Mysteries" field has suggested that these lines (and others he has studied around the world) are better understood as markings that represent the out-of-body spirit travels of ancient shamans. Archaeological research does indeed indicate that the lines often lead to small shrine-like structures where evidence of religious and shamanistic activity is common. These mysterious lines, sometimes apparently between no particular places, are found in many parts of the Anasazi region. More than five hundred miles of the lines have so far been charted. Nowadays they are mostly visible only from the air in the early morning or late afternoon, when the sun casts deep shadows. Inspecting these lines at ground level, it is evident that they have been acted upon by many hundreds of years of natural erosion, which has obscured all but scarce remains. It therefore seems reasonable to suggest that these lines, prior to their erosion, could have been followed across great expanses of land, thereby delineating an enormous grid or map of sacred and shamanistic geography. Readers interested in these matters should consult the books of Devereux listed in the bibliography.

The Primary Architecture of the Chacoan Culture: A Cosmological Expression
By Anna Sofaer 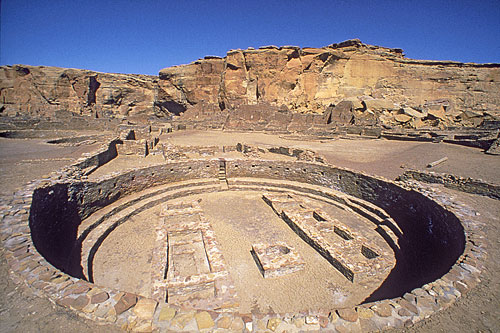 Wood in a treeless landscape

Archaeologists have helped solve the mystery of where ancient pueblos of New Mexico obtained timber to build the monumental ‘great houses’ of Chaco Canyon in a nearly treeless landscape. Constructed from around 240,000 trees, the houses are some of the largest pre-Columbian buildings in North America. Many are up to five stories high, and contain hundreds of rooms.

Researchers from the University of Arizona analyzed tree-ring data to determine the timber’s geographic origins – the first time this dendroprovenance method has been used in the southwestern United States. The results show the timber came from two different mountains ranges. Before AD 1020, most of the wood came from a previously unrecognized timber source – the Zuni Mountains, about 75 kilometers to the south of the site. By AD 1060, however, the Chacoans were sourcing trees from the Chuska Mountains, about 75 kilometers to the west.

The switch coincides with an expansion of the Chacoan culture in the area, and the building of many new great houses. Christopher Guiterman from the University of Arizona, lead author of the study, told CWA (Current World Archaeology magazine), ‘The results show the wood was transported to Chaco Canyon from a great distance – without the aid of beasts of burden, the wheel, metal tools, or a major watercourse, and the wood procurement was a dynamic and changing process. The arrival of the Chuskan timbers signifies a dramatic change in Chacoan society. We now see that once materials begin to arrive from the Chuskas, the formation and proliferation of Chacoan society crystallizes, and the Chaco we know today is the result of this transformation.’ 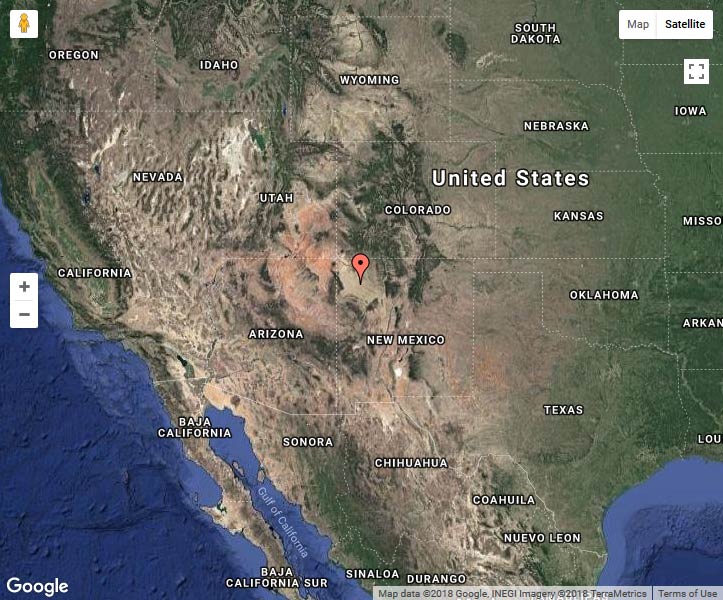