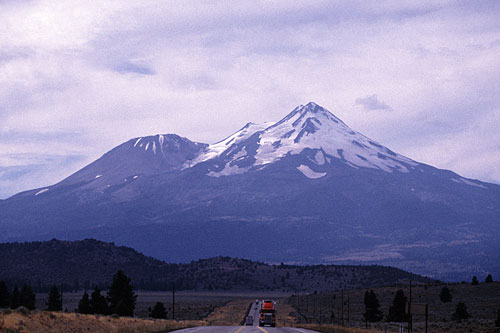 
Located in the Cascade Range of northern California, Mt. Shasta is a double peaked, infrequently active, stratovolcano rising to 14,162 feet (4317 meters). Geologists speculate that it began forming roughly 593,000 years ago. The largest volcanic peak in the continental United States, Mt. Shasta has five glaciers and numerous steam vents that feed three separate rivers. Long venerated as a sacred place by numerous Indian tribes, including the Wintu, Karuk, Okwanuchu and Modoc, the mountain takes its name from the local Sastise (Shastan) Indians. These tribes have used specific sites on Shasta for the training of medicine men and women, for spiritual vision quests, and for healing and guidance. On the mountain's lower, forested slopes, plants and other natural materials are still gathered for food, medicinal and ceremonial use. Shasta's wildlife includes eagles, black bears and wolves but the bighorn sheep, grizzlies and antelopes commonly sighted in the 19th century have disappeared. Europeans first saw the mountain in 1827 and the first recorded ascent was in 1854. Trails to the summit now allow the climb to be made up and down in one day. The USGS estimates that Shasta has erupted at least once every 800 years during the past 10,000 years and about once every 300 years during the past 3500 years. In 1786, the French explorer Laperouse claimed to have seen a volcanic eruption from the sea but there is no definitive proof of this matter.

Numerous mysterious legends and psychic messages speak of the significance of Mt. Shasta as a place of powerful earth energies. Some of the oldest legends tell of a tribe of dwarf-like people who are believed to live within the center of the mountain and be descendants of the pre-Antlantean culture of Lemuria. Hunters and campers exploring the high altitude forests of Mt. Shasta occasionally report seeing these small beings running through the woods. Contemporary psychics speak of the mountain as the center of a powerful energy vortex that radiates a vitalizing and healing energy throughout the northwestern US. More than any other mountain in North America, Mt. Shasta is a focal point for contemporary spirituality, attracting individual seekers as well as a variety of religious groups. Mt. Shasta is also said to be energetically linked with Mt. Katahdin, a sacred mountain in the state of Maine. Logging interests and resort developers are constantly threatening the great forests and wonderful peacefulness of Mt. Shasta. Prayers and the focused attention of contemporary pilgrims will assist in the protection of this magnificent sacred place.