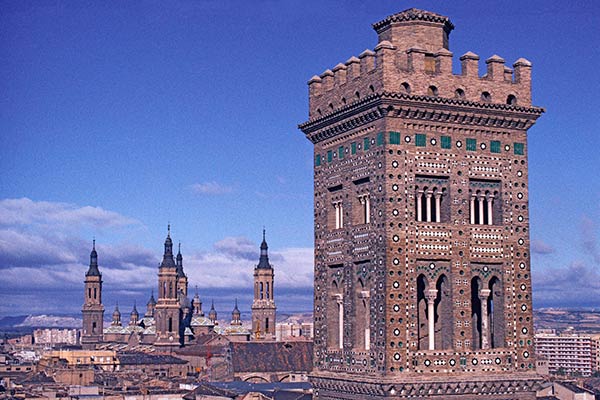 Shrines of the two Marys in Zaragoza, Spain (Enlarge)


Towards the end of the 1st century BC, the ancient Celtiberian sacred site of Salduba was conquered by the Romans and renamed Caesaraugusta after the Roman Emperor. Called Saraqustah by the Arabs, the modern name of the city, Zaragoza, is a corruption of these earlier names. There are two primary sacred places within the city, the small shrine of Mary Magdalene shown in the foreground of the photograph, and the great Catedral Nuestra Senora del Pilar, in the background. This enormous basilica, dedicated to the Virgin of the Pillar, the patron of all Spain, marks the site of the first recorded Marian apparition in Europe. The Christian telling of the foundation legend relates that St. James the Apostle, the brother of St. John the Evangelist, spent the years following the crucifixion preaching in Spain. St. James the Apostle arrived in Zaragoza in 40 AD and upon a pagan standing stone saw a vision of Mary who instructed him to build a church. A chapel was soon constructed and it became a regional center for the conversion of the pagans. Because of its pre-Christian sanctity, its Marian apparition, and its importance as a commercial and political center, Zaragoza rapidly grew in size and religious importance. The early chapel was frequently enlarged following wars and fires, and the existing cathedral was erected, at the site of the original pillar, between the 17th and 18th centuries.

Throughout the centuries mysterious apparitions have frequently been observed around the pillar and large numbers of pilgrims, both Christian and neo-pagan, continue to visit the shrine. Each year on October 12, a small, 15th century statue of the Virgin is taken on a procession around the city. Few visitors to Zaragoza take the time to meditate in the nearby shrine of Mary Magdalene; for this author that is the more powerful (and certainly more quiet) place. Mary Magdalene, whose relics were originally stored at St. Maximin in France and later transferred to Vezelay, also in France, was highly venerated in the medieval ages. There were over 125 shrines dedicated to her worship and at least fifty of these also contained shrines to the Black Virgin. Readers interested in studying the subject of Black Virgins, Dark Goddesses and Mary Magdalene in greater detail will enjoy the books, The Cult of the Black Virgin, by Ean Begg; Shrines of Our Lady, by Peter Mullen; and Mary Magdalene: Christianity's Hidden Goddess, by Lynn Picknett.