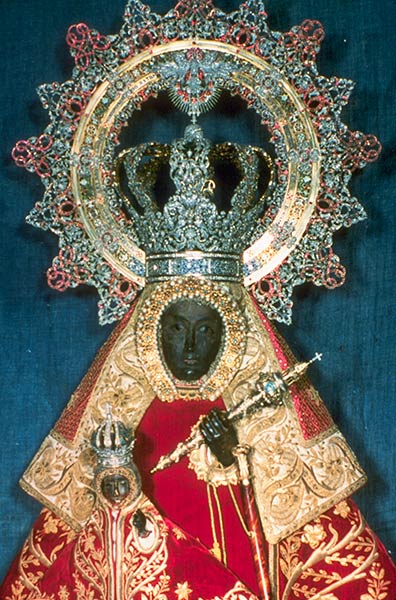 
Various legends, mingled with a bit of questionable historical information, tell the story of the Black Virgin of Guadalupe in Spain. According to one legend, the statue was carved during the 1st century by St. Luke and buried with him in Asia Minor. Later transferred with St. Luke's relics to Constantinople in the 4th century, the statue became known as a miraculous healing icon. Sent to Rome and then Sevilla, Spain in the 6th century, the icon continued to perform miracles until its mysterious disappearance following the Arab invasions of Sevilla in 711 AD. Five centuries later, in 1252, the Virgin Mary is said to have appeared to a peasant living in the Extremadura hills of central Spain, revealing to him the location of the lost icon and directing that a church be erected at the exact site where it was found. By the mid-15th century when the Basilica of Guadalupe had been completed, the Black Virgin had become one of medieval Spain's most important pilgrimage shrines. Historically there is no proof that the icon discovered in 1252 is the same icon that St. Luke supposedly carved twelve centuries earlier. Indeed it is doubtful, for the Guadalupe Black Virgin has stylistic features that indicate its carving period being no earlier than the 11th century.

Whatever the age or the origin of the statue, it is important to consider the legendary description of the icon as having miraculous healing powers. How are these powers to be explained? The current author theorizes that the healing powers of certain icons, statues and images derive in part from their capacity to somehow function as both receptacles and conduits for some manner of spiritual or healing energy. To grasp the implications of this concept consider the matter of how physical objects, upon being exposed to various types of energy, may actually build up a charge of that energy and then radiate the energy back into the environment. For example, a stone after being removed from a fire continues to give off radiant heat, and a battery having been charged with electric energy thereafter has the capacity to conduct that energy into an electrical appliance. Perhaps, in some currently unexplained manner, sacred sites and sacred objects are able to gather, store, concentrate and radiate energy in a similar way. Consider also the studies, conducted under rigorous double-blind conditions in hospitals in the US and Europe, which have repeatedly demonstrated that people's prayers for the well being of another person do actually have a healing effect. This prayer-activated, person-to-person healing phenomena, though currently unexplained by the medical and scientific community, has been shown to occur over great distances and even with patients who do not know they have been the focus of prayers.

Reflecting on these matters, it seems possible that the so-called 'miraculous' healing icons somehow function as storage batteries for the prayer-transmitted spiritual energy of the millions of pilgrims who visit the sacred shrines. These ‘battery-icons,’ continuously charged over hundreds and often thousands of years, act as conduits and radiant sources of the energies they have stored, and it is these energies that are partially responsible for the 'miracles' of healing so often reported at the sacred sites. 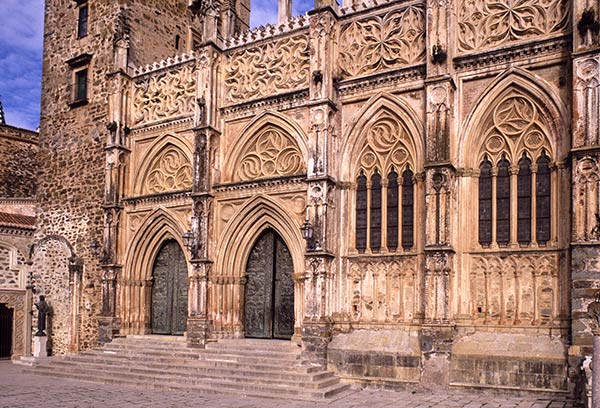 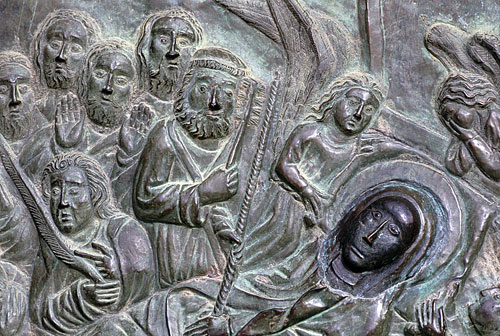 Detail of door on Pilgrimage Church of Guadalupe, Spain