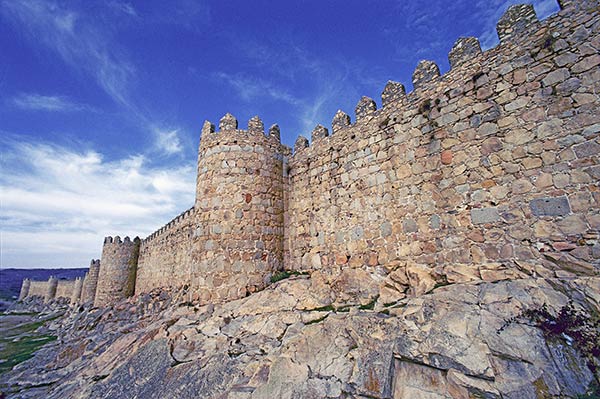 
One of the finest remnants of Europe's medieval era, the walled town of Avila was sacred to an ancient Celtiberian culture long before the arrival of the Romans or Christians. The city was captured by the Arab Moors in 714 AD, recaptured by the Christians in 1088, and had its protective walls built in the 12th century. Extending for 2,500 meters (8202 ft.) and encircling the old town, the massive walls are punctuated by ninety, heavily fortified stone towers. Avila is much visited by tourists today, yet in the late medieval ages its visitors were pilgrims coming to the church in the center of the walled city. The current church, begun in 1091 and completed in the 13th century, is where the mystic St. Teresa (1515-1582) had frequent visions and ecstatic experiences. Nearby the church stands the house where St. Teresa lived.

When asked which sacred sites influenced me most strongly during my long pilgrimage travels, I always include the cathedral of Avila in my response. There is a wonderful presence or energy inside the cathedral, especially focused at two locations, which stimulated in me the most sublime and passionate feelings of spiritual love. It is often my habit, within the various temples, mosques and churches that I visit, to utilize different dowsing techniques in order to locate what I call energy beam points. These places are particular locations within the larger area of a sacred structure where it seems that the energy, spirit or power of the site is most highly charged. In Avila, I located three of these energy beam points, two of which it was possible to stand directly upon. During a four-day exploration of Avila I spent many hours each day sitting or standing at these two places. My experience at them was of a presence that surrounded and infused my being with the most intoxicating compassion. I was frequently so overwhelmed while standing at these sites that I would softly cry with intense joy for minutes on end. The tourists visiting the church found my behavior a bit odd, but the old priests seemed to well understand.