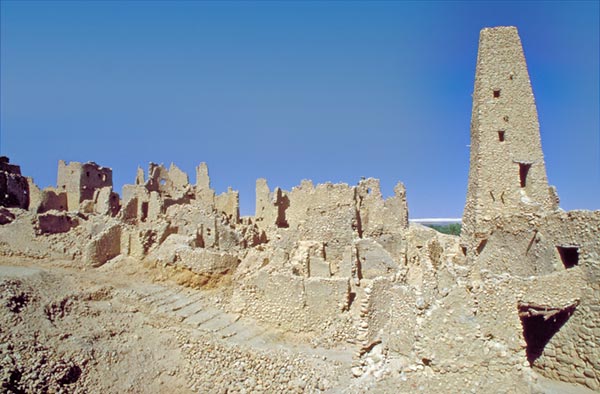 Siwa Oasis is located in the desert of western Egypt 300 kilometers (185 miles) southwest of the Mediterranean city of Marsa Matruh. The word Siwa comes from the Arabic Wahat Siwah, meaning ‘Protector of the Egyptian Sun god Amon-Ra.’ Siwa is known primarily as the site of a Greek oracle temple dedicated to the Egyptian sun god Amun. The temple can still be seen on the hill of Aghurmi, which is 4 kilometers from the town of Siwa.

Flint implements show that Siwa was already inhabited in Paleolithic and Neolithic times, but the first historical records date from the Middle and New Kingdoms of pharaonic Egypt (2050-1800 BC and 1570-1090 BC). Nonethless, it is unlikely that the pharaohs and their governors ever exercised any real control over Siwa, since there are no signs of any buildings dating from this period.

Yet Siwa was, in its way, a center of Egyptian culture, for a temple there, built to honor the ram-headed sun god Amon-Ra, housed a divine oracle whose fame, by about 700 BC, was widespread in the eastern Mediterranean. King Cambyses of Persia, son of Cyrus the Great and conqueror of Egypt, held a grudge against the oracle, probably because it had predicted that his conquests in Africa would soon falter - as indeed they did. In 524 BC Cambyses dispatched from Luxor an army of 50,000 men to destroy the Siwan oracle - a dispersion of forces that he could ill afford on his way to capture Ethiopia. The entire army vanished without a trace, buried in the seas of sand between Siwa and the inner-Egyptian oases, and no sign of it has been found even to this day.

The most illustrious visitor to Siwa was undoubtedly Alexander the Great. He was acclaimed pharaoh of Egypt after defeating the Persian Darius in the battle of Issus in 333 BC. In 331 he set sail from his newly-founded city of Alexandria, reached Mersa Matruh, and marched toward Siwa along the desert route that is still used today.

Though we do not know for certain, Alexander's purpose in making the journey may have been a piece of political image-making. Each of the pharaohs of Egypt's 28th Dynasty had traveled to Siwa to be acknowledged at the temple there as the son of Amon-Ra, the supreme god; each, thereafter, was depicted as wearing the ram's horns of Amon on his head. Alexander wanted the same declaration of divine power to legitimize his conquest of Egypt and put himself on the same footing as the pharaohs. 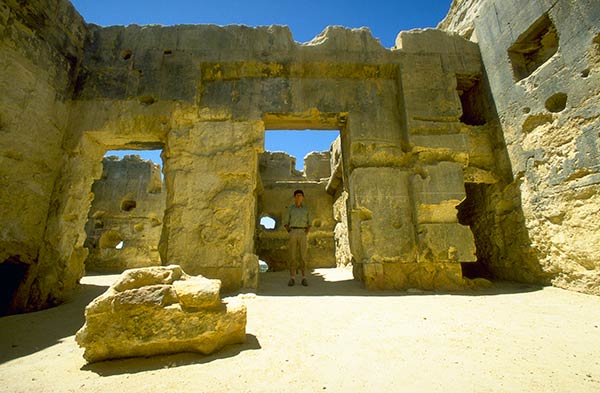 Sanctuary of the Temple of Amun, Siwa Oasis


With the coming of Roman times, oracles went out of fashion, and so did the Egyptian gods, whom the Greeks had more or less integrated into their own mythology. Auguries and the reading of animal entrails were more the Roman style. When the traveler and historian Strabo visited Egypt in 23 BC he could note that the oracle of Amon had lost almost all importance, though doubtless the god was still worshiped locally till the advent of Islam.

The next thousand years in Siwa's history were difficult ones. Social and economic unrest followed the dissolution of Roman political power. Bedouin tribes raided the scattered settlements of the oasis and disrupted what little commerce the Siwans had. Around the year 1200 the population was reduced to 40 able-bodied men, perhaps 200 people in all. Then the whole population moved from the low ground near the temple of the oracle to a nearby hill that could be fortified.

The first European to visit since Roman times was the English traveler William George Browne, who came in 1792 to see the ancient temple of the oracle. By the 19th century other European visitors, never welcomed by the population, described the whole hill as a vast beehive of buildings. In 1820, Siwa came under outside rule for the first time when it was conquered by the troops of Muhammed Ali, the Ottoman pasha of Egypt. With central rule, the defensive needs of the town were reduced and for the first time since 1200 it was permitted to build houses outside the fortifications of the town - though most people were reluctant to do so. A fierce rainstorm in 1926 demolished many houses, however, and made others unsafe, forcing people to leave. The ancient town is now almost in ruins, though its honeycomb nature is still clearly discernible.

Recently, a team of Greek archaeologists working near Siwa oasis, in Egypt's western desert, uncovered three tablets indicating that Alexander's body might have been taken there for burial after he died in a military campaign. More research regarding this matter is being carried out.

Other local historic sites of interest include: the remains of the oracle temple; the Gebel al Mawta (the Mountain of the Dead), a Roman-era necropolis featuring dozens of rock-cut tombs; and "Cleopatra's Bath", an antique natural spring.