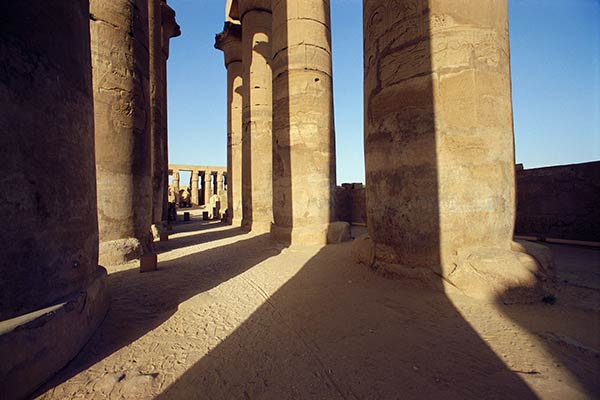 The Colonnade of Amenhotep III Temple of Luxor, Egypt (Enlarge)

In 1937 the Alsatian mathematician, philosopher and Egyptologist, R.A.Schwaller de Lubicz began a fifteen year, on-site study of the great temple complex of Luxor. Assisted by a highly trained team of surveyors and architectural draftsman, he precisely measured, analyzed and recorded every stone, column, passageway, chamber, inscription and statue in the temple complex. His findings, published in the Temple of Man, call for a total reexamination and reinterpretation of the entire body of Egyptological theory. Yet, by and large, the seminal work done by Schwaller de Lubicz has been ignored, even abused, by the contemporary Egyptological community. The reasons for this are not hard to find.

Schwaller de Lubicz had profoundly confronted the prevailing archaeological theories concerning the development, mathematical sophistication, religious symbolism, and total culture of the ancient Egyptians. To understand the significance, indeed the radical nature, of what he has done it is important to recognize two matters. First, that the currently popular 'scientific' notions concerning the origin, timing, order and locality of the development of the earliest civilization are little more than theories - tentative assumptions given the appearance of authority by the elitist posturing of the academic community - based upon less than two hundred years of piecemeal archaeological study. And second, that those two hundred years of study were profoundly influenced by the arrogant belief of the European Age of Enlightenment that modern civilization represents a great advance, especially philosophically and mathematically, over ancient civilizations.

Schwaller de Lubicz challenged these notions by showing that the Dynastic Egyptians possessed mathematics superior to that of the Pythagorean Greeks, whom they preceded by more than 1500 years, and that of the Europeans, whom they preceded by more than 3000. Furthermore, he has demonstrated that Egyptian culture represents a great doctrine in which science, religion, philosophy and art were altogether fused into one grand and extraordinary synthesis equaled no where else in the entire ancient or modern world. Most contemporary Egyptologists become quite uncomfortable when the research of Schwaller de Lubicz is mentioned. They cannot find fault with the absolute precision of his measurements and scholarship, yet they refuse to see beyond the biases of their 'modern' Eurocentric programming to grasp the astonishing brilliance of Egyptian culture. Readers interested in the studies of Schwaller de Lubicz will find a good introduction in the excellent book Serpent in the Sky by John Anthony West.

Built upon the site of a small Middle Kingdom temple, much of the present temple of Luxor was constructed by the 18th Dynasty pharaoh Amenhotep III (reigned 1391 - 1353 BC). A stunningly beautiful double colonnaded court was added by the 19th Dynasty pharaoh Ramses II (reigned 1290 - 1224 BC). The enormous asymmetric complex, over 800 feet long, was built in stages to a design unique in sacred architecture; it is constructed upon three separate axes, and every wall, colonnade and hall is rigorously aligned to one or another of these three axes. Additions made a thousand years later by the last of the Egyptian-born pharaohs, those made a few years later by Alexander the Great, and even those of the Romans, were all aligned according to the original axes, showing that the architectural guidelines ordering the temple were handed down through the generations. These three different axes, skewed as they are, seem to defy logical explanation, yet Schwaller de Lubicz saw within them a deliberate expression of harmony, proportion and extraordinary symbolism.

While it is too complex a subject to discuss here, Schwaller de Lubicz found in the temple of Luxor a record of the Egyptian's understanding of the cosmic laws of creation and the manner in which spirit becomes manifest as matter. One of his central insights was that the various sections of the human body are incorporated into the proportions of the temple itself (see illustration below), and in the proportions of the various sculptures and wall carvings. John Anthony West writes:

"Because there is nothing in our society that remotely corresponds to a Temple of Luxor, it is difficult to understand why Egypt should have exercised such infinite pains and genius on what is ultimately a symbolic gesture. It is even more difficult for us to understand the uses to which it was put and the effect it must have had on those exposed to it." West suggests that "the Temple is in the nature of a magic rite, extending over two millennia, designed to evoke in the beholder an understanding of creation and creative power." 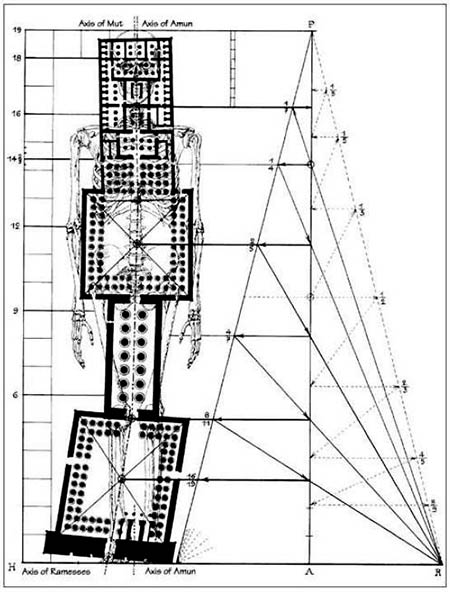 The Temple at Luxor superimposed over a human skeleton with
sacred geometric proportions demonstrated  by R. A. Schwaller de Lubicz