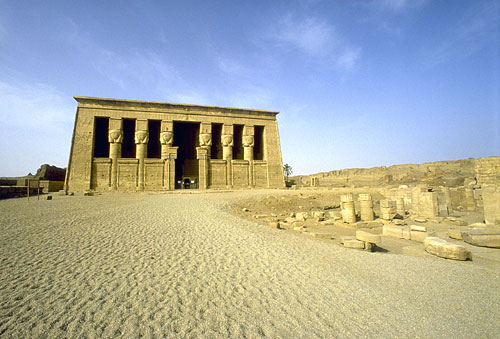 
Similar to other temple sites in Egypt, the presently standing complex at Dendera marks the location of a very old holy place. An indication of the antiquity of the temple site is given by the astronomical alignment of the main temple to Gamma Draconis before 5000BC. Early texts refer to a Pre-dynastic temple that was rebuilt during the Old Kingdom, and further developed by New Kingdom pharaohs including Thutmose III, Amenhotep III, and Ramses II and III. The present structure dates to the Greek and Roman periods, with the sanctuary and its surrounding chapels built by the later Ptolemies in the 1st century BC, and the great Hypostyle Hall by the Romans in the 1st century AD. Dendera was the chief place for the worship of Hathor, who is variously seen as the patroness of earthly love, the goddess of healing, and the great feminine source of all nourishment (like the Hindu goddess Kali, Hathor also has her terrible aspects; in one ancient myth she is a raging lioness sent to punish mankind for its rebellion).

Recent studies indicate that the temple of Dendera had several interrelated functions. It was a venerated place of pilgrimage where miraculous cures were effected by the goddess; it was a sort of hospital where various physiological, psychological and magical therapies were practiced; and it was the scene of great processions and festivals throughout the astrological cycle. A feature of Dendera not found elsewhere in Egyptian temples are the dozen mysterious crypts, some underground, some enclosed within the massive double walls of the upper temple. It has been suggested that these crypts were the dwelling place of the goddess, where her statue and ritual objects were kept, and where began the great New Year's processions celebrating the dawn of creation. In the dark of night, the temple priests brought the statue of the goddess from the crypt, through the corridors of the enormous temple and, ascending to the roof, awaited the coming of the dawn. As the first rays of the morning sun broke upon the horizon, the statue was unveiled. Ancient texts speak of this ceremony whereby: "the goddess Hathor might be united with the beams of her father, Re" and that "the sky rejoices, the earth dances, the sacred musicians shout in praise."

Enclosed within the precincts of the Dendera complex are a sacred lake, a temple of the goddess Isis, and a brick sanatorium where divine healing was practiced. There is also an early Christian church that typifies the situation in so many Egyptian temples, whose sacred precincts were usurped by the Christians. Within the main temple it is interesting to study the beautiful and highly detailed astrological calendars carved and painted upon the ceilings. Visitors may wonder about the blackened condition of other ceilings in the temple. When Napolean's scholars first visited Dendera they found a centuries-old Arab village firmly established inside the great temple; the villagers' cooking fires had blackened the ceilings over the years. 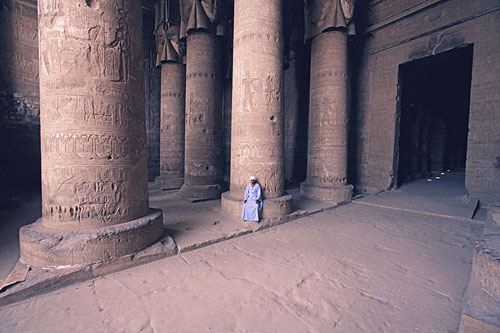 Interior of the Temple of Hathor, Dendera