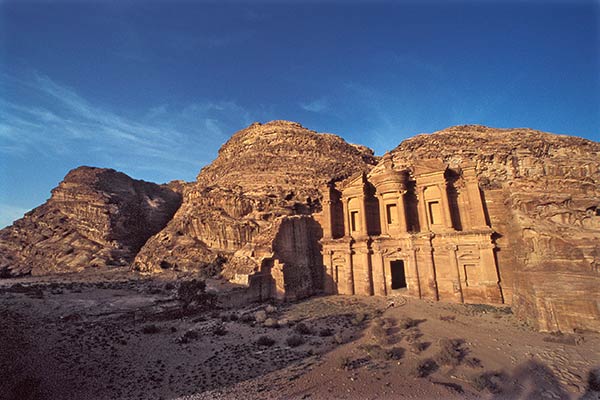 
Situated in present-day Jordan and hidden amidst nearly impenetrable mountains to the east of the valley connecting the Gulf of Aqaba and the Dead Sea, stands the ancient city of Petra. One of the world’s most visually stunning archaeological sites, Petra (meaning ‘the rock’ in Greek) is an abandoned necropolis of temples and tombs cut into towering cliffs of red, pink and orange sandstone.

Primarily known as a commercial and ceremonial center of the Nabataean culture during the centuries before and after the time of Christ, the region of Petra was inhabited in far greater antiquity. Archaeological excavations have revealed a rock shelter of the Upper Paleolithic period, dating to around 10,000 BC, and a Neolithic village from the 7th millennium BC. While evidence of habitation during the Chalcolithic and Bronze ages has not yet been found, the region of Petra was again occupied in the early Iron Age, around 1200 BC, by the Edomite culture of the Old Testament (Edom, meaning red, is the Biblical name for this region of the Middle East).

During the 6th –4th centuries BC, the Nabataeans, a nomadic tribe from the northwestern part of Arabia, entered and gradually took over the lands controlled by the Edomites. The first historical mention of the Nabataeans is in a list of the enemies of the King of Assyria in 647 BC, during which time Petra was still occupied by the Edomites. There are several reasons, religious and economic, suggested for the Nabataeans selection of Petra as their capital. The city of Petra is situated at the beginning of Wadi Musa, meaning the Valley of Moses, and this site had long been venerated as one of the traditional sites where Moses struck the ground and the water gushed forth. The region was also revered by the Nabataeans as the sacred precinct of their god Dushara. 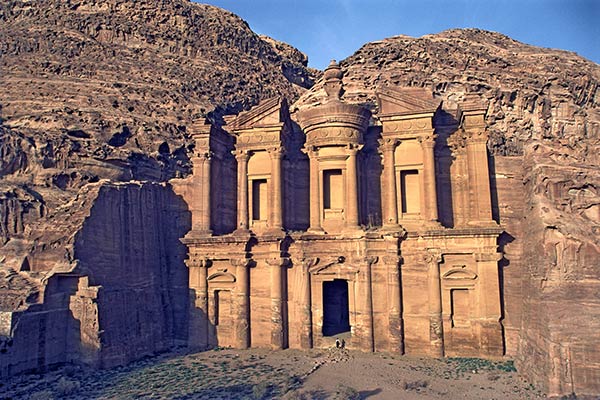 Petra’s prominence also derives from its proximity to ancient caravan routes, its easily defended location, stable water resources and proximity to rich agricultural and grazing lands. The Nabataean capital was strategically situated only twenty kilometers from the crossroads of two vital trade routes; one linking the Persian Gulf (and thereby the silks and spices of India and China) with the Mediterranean Sea (and the empires of the Greeks and Romans), the other connecting Syria with the Red Sea. In their early years, the Nabataeans probably only plundered these caravans but as they grew more powerful they seem to have levied tolls as a guarantee of safe conduct. By the third and second centuries BC, the city of Petra had developed into a rich and powerful center of the caravan trade. During the next four hundred years, their dominion spread as far north as Damascus and their capital city was beautified with splendid temples, tombs and many hundreds of freestanding residential and commercial buildings (the less substantial houses and stores have long since crumbled to sand). The earliest tombs and temples, dating from 300 BC, show Egyptian and Assyrian characteristics, and with the Greek and later Roman influences the Nabataeans developed their own distinctive architectural style. All these structures were laboriously cut into the soft sandstone rock that would have long ago crumbled if not for the fact that this region of Jordan receives very little rain.

In 106 AD, the entire Nabataean kingdom came under the control of the Roman Empire. During the ensuing centuries Petra continued to prosper as the Romans carved many buildings as well as a great theater capable of holding 3000 spectators. While the political and economic power was completely in the hands of the Romans, the Nabataeans continued to adhere to the practices of their own religion. With Emperor Constantine’s proclamation of Christianity as the religion of the Roman Empire in 324 AD, Petra and the lands of the Nabataeans came under the sway of the Byzantine Empire for the next three hundred years. An inscription in the so-called Urn Tomb indicates that the interior was converted to a Christian church in the fifth century, when there was a Bishopric of Petra.

The Christianization of the Roman Empire signaled the end of the golden era of Nabataean culture and the magnificent city of Petra. Decline slowly set in. With the establishment of the Umayyad Caliphate in Damascus in 661 the region of Petra fell under the control of Islam and the commercial importance of the city plummeted. A series of earthquakes in the 7th and 8th centuries destroyed many of the cities in the region, further weakening the agricultural and commercial infrastructure. Following the establishment of the Abbasid Caliphate in Baghdad in 750, the region of Petra was neglected and thereafter virtually disappears from the historical record. Abandoned to time and the elements, Petra was unknown to the outside world - with the single exception of an insignificant Crusader fortress built in the 12th century - until its ‘rediscovery’ in 1812. 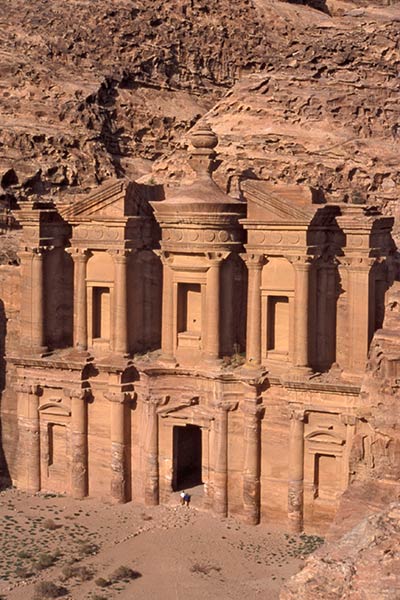 Studying the Middle East with the funding of an English explorers society, a young Swiss adventurer, Johann Burckhardt, was slowly making his way from Damascus to Cairo by a little known and dangerous land route. Fluent in Arabic and posing as a Muslim traveler, he heard tales from desert Bedouins of the extraordinary ruins of an ancient city hidden in the remote Sharra Mountains. No European had seen the fabled city, or lived to tell about it, and Burckhardt recognized that he would have to resort to deceit to gain entrance. A plan developed in his mind. He would hire local Bedouins as guides, telling them that he intended to sacrifice a goat at the shrine of Aaron (the brother of Moses), whose tomb he believed was in the vicinity of the ruined city. At the village of Elji (now called Wadi Musa), Burckhardt persuaded two Bedouin to escort him along the Valley of Moses and toward the shrine of Aaron. There is only one reasonably safe path leading to the shrine from Wadi Musa and, luckily for Burckhardt, it passed directly through the ruins of Petra. Winding his way along an extremely narrow gorge the explorer came unexpectedly upon the great rock temple of Khasneh. More than 30 meters high and carved entirely out of the face of the sheer cliff, the Khasneh has become the symbol of Petra and was immortalized in the Hollywood movie, Indiana Jones and the Last Crusade. The Bedouin leading Burckhardt to the tomb of Aaron became increasingly suspicious of his intentions with the result that he neither reached the tomb nor was able to view the major shrine of the Nabataeans, known as Al Deir (he did, however, perform his mock sacrifice at the foot of Jebel Haroun).

Located in a remote gorge, northwest of the center of Petra, Al Deir is the largest and most visually stunning of all the structures in Petra. Carved entirely out of the red sandstone of a mountain wall, the temple is 50 meters wide by 45 meters tall and has an 8-meter tall entrance door. Inside the single empty chamber (12.5 by 10 meters), the walls are plain and unadorned except for a niche in the back wall with a block of stone representing the deity Dushara. The chief deities of the Nabataeans were Dushara, Al-Uzza and Allat. The name Dushara means ‘He of the Shara’, referring to the Sharra Mountains on the northern border of Petra. Like the Hebrew god, Jehovah, Dushara was symbolized by an obelisk or standing block of stone (and this indicates influences from archaic Sumerian, Egyptian and megalithic cultures) and his symbolic animal was the bull. The goddess Al-Uzza was symbolized by a lion and was the ‘peoples’ deity, where as Dushara was the god of the nobility and the official cult. The goddess Allat was associated with natural springs, of which there are several in the otherwise extremely arid lands of the Sharra Mountains.

An elaborate processional way leads to Al Deir from the center of Petra and the enormous flat courtyard in front of the temple, capable of accommodating thousands of people, suggests that the temple was the site of large-scale ceremonies. There are traces of a stone ring in the courtyard but no other indications of the type of worship that was practiced by the Nabataeans. While the exact age of the temple is unknown, on stylistic grounds scholars date it to the mid-1st century AD. The Al Deir is sometimes called ‘The Monastery’ because of a belief that it served as a church during Byzantine times. A few small crosses carved on the interior walls show that the Christians used the temple for some purpose. 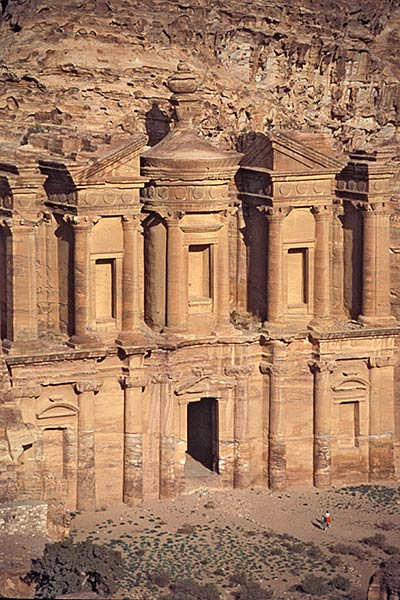 According to certain traditions it was in the region of Petra that Miriam, the sister of Moses, died and was buried. Her mountaintop shrine was still shown to pilgrims at the time of St. Jerome in the 4th century AD but its location has not been identified since. Some scholars have suggested that the temple of Al Deir may be the site of her grave but this was certainly not the original or the primary use of the temple.

The splendid ruins of Petra, which were listed as a UNESCO World Heritage Site in 1985, have for some years been faced with a worrying threat; salt blown in from the Dead Sea is encrusting the relatively delicate sandstone and slowly weakening the buildings.

Other important sacred places in Petra include Al-Madbah, The High Place of Sacrifice, on the summit of Jabal Madbah; a cult site devoted to the spirit of water on the mountain of Umm al-Biyara; the mountain of el-Barra where stands Aaron’s tomb; and, at the entrance of Petra, three massive Jinn (spirit) stones sacred to the local tribes. Fifty miles north of Petra, on the peak of Jebel Tannur, stands the important Nabataean shrine of Khirbet Tannur. 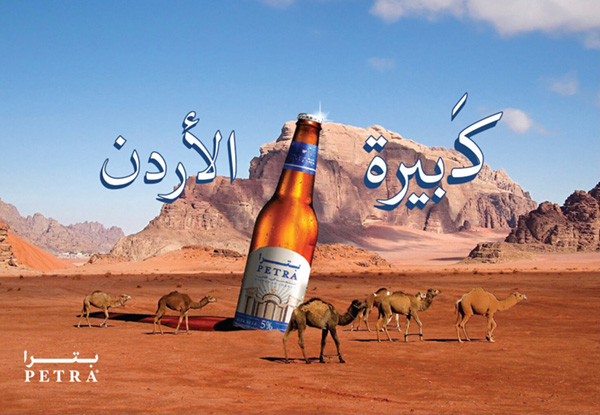 The influence of the sacred site of Petra on popular culture in Jordan -
the use of its image for a much enjoyed beer.