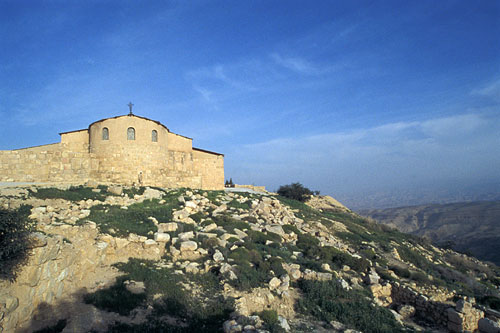 
Jebel Musa, also called Mount Nebo, lies to the northwest of Madaba, Jordan and is the alleged site of the tomb of Moses. The principal ruins are at a place called Syagha and consist of a church and an adjacent monastery. The first historical mention of the church is in the account of the famous pilgrim, Lady Egeria (Aetheria) who visited the site in 394 AD. She describes a small church containing the tomb of Moses, the place having been miraculously revealed in a vision to a local Shepard. In the late fifth or early sixth century the shrine is mentioned in the biography of Peter the Iberian. The building is now described as a " very large temple, named after the prophet Moses and many monasteries which are build around it", which seems to indicate that an enlargement of the complex since the time of Egeria. Writing of the power of the holy place, Peter the Iberian says,

This temple was built in the name of the great prophet and lawgiver, and he proclaims this publicly and to every man, so that no doubt is possible in the signs and wonders and cures, which since that time have occurred at this place without interruption. For it is a place of cure for both the souls and for the bodies, and a place of refuge for all those, who come here from all places and are afflicted in the soul and affected with many kinds of sufferings of the body.

A Portuguese Franciscan monk visited the site in 1564 but by then the buildings on the peak were ruined and abandoned, though a small church at Ayun Musa (Moses' Springs) in a valley to the north, was still in use. Mt. Nebo is again mentioned in a document of the 17th century but the writer does not mention either buildings or ruins at the site. Beginning in 1933, the Franciscan Biblical Institute of Jerusalem has conduced extensive excavations upon the summit of Jebel Musa, revealing the church and monastery described by the early pilgrims. The church is the usual basilica type and corresponds almost exactly with the tomb of Moses that Egeria had described in 394 AD. The floors of the sanctuary were decorated with wonderful mosaics and many inscriptions. Judging from the size of the ancient monastery, there was a considerable community living upon the mountain.

From the terrace to the west of the church it is sometimes possible on clear days to have a view across the Jordan valley all the way to the Mount of Olives. The River Jordan is hidden from view in a deep canyon but the Dead Sea gleams in the sunlight over 3500 feet below. It must have been somewhere in this vicinity that Moses stood and gazed upon the Promised Land. Long before the time of Moses, however, Mt. Nebo was already a sacred site and remains of pagan temples of the Phonecian god Baal have been found around the peak.

Information and maps regarding many other Christian and Muslim sacred sites in Jordan may be found in The Holy Sites of Jordan, published by the Turab Corporation, Amman, Jordan 1996. The maps on this web site are taken from that book.