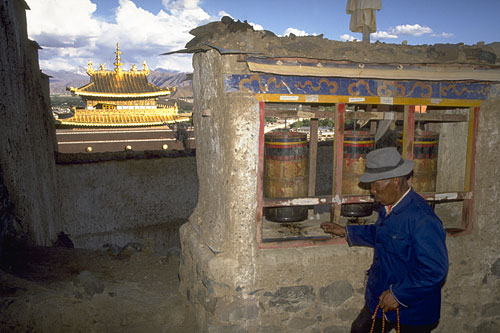 
Prior to the Chinese invasion of Tibet in 1951, hundreds of thriving monasteries were scattered throughout the vast country. These monasteries, many continuously occupied since the 9th century, were home to one of the world's most profound wisdom traditions as well as being repositories of great collections of sacred art - murals, sculptures and illustrated manuscripts - of unique and sublime beauty. During the 1960's and 1970's virtually all of this was systematically and ruthlessly destroyed by fanatical Chinese participating in the Cultural Revolution initiated by Mao Tse Tung. The monks were tortured and murdered, the ancient murals were burned and ripped from the walls, the golden statues were stolen and melted down, and the great monasteries were blown apart by massive charges of dynamite. By 1976 the destruction had somewhat abated; Mao had died and there were no more monasteries to plunder.

Twenty years later, however, the Tibetans continue to be violently oppressed by the Chinese. Few westerners are truly aware of the extent of the ongoing Chinese atrocities in Tibet: hundreds of monks are still imprisoned, vast areas of the country (which are off limits to foreign visitors and investigative journalists) are being stripped of their natural resources, and the Chinese make no effort to provide medical or educational services to the native inhabitants. Due to the ceaseless work of the 14th Dalai Lama and that of many thousands of individuals and non-governmental organizations around the world, growing pressure is being placed upon the Chinese government to return Tibet to its people. Thus far however, the Chinese have refused to even discuss the issue and have instead sought to deceive the international community by engaging in the "reconstruction of the monasteries". Naive foreigners may indeed be fooled by this smokescreen, yet it is revealing to note that only a very few monasteries have received any reconstruction assistance, and at those monasteries which have received assistance, the reconstruction has been poorly done and underfunded (the most visible example of the reconstruction effort, the monastery of Tashilhunpo, is the seat of the Panchen Lama, who, before his death in 1989, was a puppet of the Chinese military).

Tibetan pilgrims visit Tashilhunpo, as they visit other ancient monastic sites, to access the spirtual presence deriving from both the terrestrial power of the place and the meditative practices of the sages who have lived there over the centuries; at Tashilhunpo they also come to pray for the spirit-health of the monastery - a health that will only return with the departure of the Chinese.

In the mountains of far western Tibet are the great monasteries of Toling and Tsaparang. Once as grand, thriving and beautiful as Tashilhunpo, they are now in total ruin because of the ravages of the Chinese. They are seldom visited these days. Few Tibetans can afford the cost of pilgrimage to such remote areas and the twenty days of rugged jeep travel to reach the sites discourages all but the most adventurous foreigners. 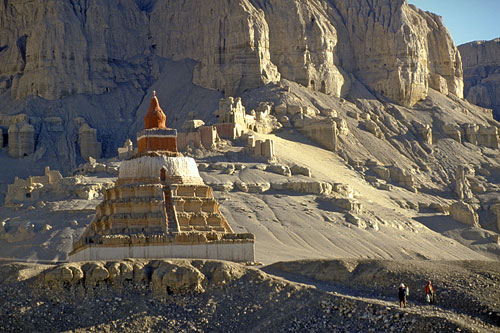 Ruins of the Monastery of Toling, Tibet 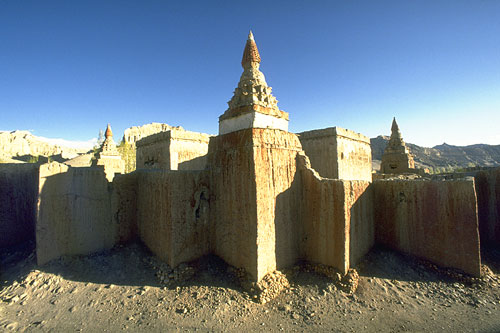 Stupa and ruins of monastery of Toling, Tibet.