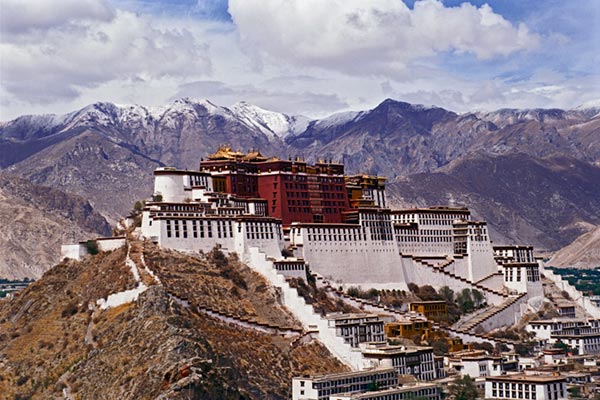 Perched upon Marpo Ri hill, 130 meters above the Lhasa valley, the Potala Palace rises a further 170 meters and is the greatest monumental structure in all of Tibet. Early legends concerning the rocky hill tell of a sacred cave, considered to be the dwelling place of the Bodhisattva Chenresi (Avilokiteshvara), that was used as a meditation retreat by Emperor Songtsen Gampo in the seventh century AD. In 637 Songtsen Gampo built a palace on the hill. This structure stood until the seventeenth century, when it was incorporated into the foundations of the greater buildings still standing today. Construction of the present palace began in 1645 during the reign of the fifth Dalai Lama and by 1648 the Potrang Karpo, or White Palace, was completed. The Potrang Marpo, or Red Palace, was added between 1690 and 1694; its construction required the labors of more than 7000 workers and 1500 artists and craftsman. In 1922 the 13th Dalai Lama renovated many chapels and assembly halls in the White Palace and added two stories to the Red Palace. The Potala Palace was only slightly damaged during the Tibetan uprising against the invading Chinese in 1959. Unlike most other Tibetan religious structures, it was not sacked by the Red Guards during the 1960s and 1970s, apparently through the personal intervention of Chou En Lai. As a result, all the chapels and their artifacts are very well preserved.

From as early as the eleventh century the palace was called Potala. This name probably derives from Mt. Potala, the mythological mountain abode of the Bodhisattva Chenresi (Avilokiteshvara / Kuan Yin) in southern India. The Emperor Songtsen Gampo had been regarded as an incarnation of Chenresi. Given that he founded the Potala, it seems likely that the hilltop palace of Lhasa took on the name of the Indian sacred mountain. The Potala Palace is an immense structure, its interior space being in excess of 130,000 square meters. Fulfilling numerous functions, the Potala was first and foremost the residence of the Dalai Lama and his large staff. In addition, it was the seat of Tibetan government, where all ceremonies of state were held; it housed a school for religious training of monks and administrators; and it was one of Tibet's major pilgrimage destinations because of the tombs of past Dalai Lamas. Within the White Palace are two small chapels, the Phakpa Lhakhang and the Chogyal Drubphuk; dating from the seventh century, these chapels are the oldest surviving structures on the hill and also the most sacred. The Potala's most venerated statue, the Arya Lokeshvara, is housed inside the Phapka Lhakhang, and it draws thousands of Tibetan pilgrims each day.