Archaeological excavations have revealed Neolithic activity in the vicinity of Lhasa yet it is probable that the actual founding of the city occurred in the 7th century AD. Songtsen Gampo (traditionally the 33rd king of Tibet, though there are no records to substantiate the entire lineage) lived from 617 to 649 AD and is credited with both the founding of Lhasa and the effective introduction of Buddhism into Tibet. While it is possible that Lhasa had some pre-Buddhist sacred importance, legends and records give little evidence of this matter.

The events leading to Lhasa's emergence as the sacred city of Tibetan Buddhism begins are associated with the marriages of King Songtsen Gampo to his Nepalese and Chinese wives. In 632 (or 634) Songsten Gampo married his first wife, Princess Tritsun (the sister of the Nepalese King Narendradeva). In 641, Gampo married his second wife, Princess Wencheng from China, who brought with her two statues of the Buddha. These statues were called the Akshobya Vajra, depicting the Buddha at the age of eight, and the Jowo Sakyamuni, depicting Buddha at the age of twelve. After a long journey on a wooden cart, the Jowo Sakyamuni statue arrived in Lhasa and the cart became stuck in the sand. Princess Wencheng divined that beneath the cart was the subterranean ‘Paradise of the Water Divinities’ and so constructed the Ramoche temple to house the Jowo Sakyamuni statue at that specific location.

Soon thereafter, the King began construction of another temple, the Rasa Trulnang Tsuglag Khang, to house the Akshobhya Vajra statue. The site of the temple, in the middle of Lake Wothang, was determined through astrological consultation and geomantic divination. Construction began but the work that was completed during the day was mysteriously undone each evening. Seeking an explanation through visions and more geomantic divinations, the King and his Queens learned that Tibet was situated upon the back of a sleeping demoness. The demoness was exerting negative influences upon the land, thereby inhibiting the introduction of Buddhism, and could only be pacified by the construction of twelve temples at specific geomantic locations in the countryside. The King attended to this work and only then completed the Rasa temple, in which was placed the Akshobhya Vajra statue. This new temple, called 'The House of Mysteries' or 'The House of Religious Science' was built upon the exact site believed to be the heart of the demon, which was also considered to be a gateway leading to the underworld.

In 649 King Songtsen Gampo died and Queen Wencheng, for protection against an expected Chinese military invasion, removed the Jowo Sakyamuni statue from the Ramoche temple and concealed it in the Rasa Trulnang Tsuglag Khang temple. The Akshobhya Vajra statue was placed, where it remains to this day, in the Ramoche temple. Uncovered from its hiding place in 710, the Jowo Sakyamuni statue remained in the Rasa Tulnang Tsuklakang temple which was then given its current name of Jokhang, meaning 'Shrine of the Jowo'.

The Jokhang temple, a massive building consisting of three floors and an open roof all filled with chapels and chambers, has undergone extensive reconstructions and additions since the 7th century, particularly during the 17th century reign of the fifth Dalai Lama. While parts of the existing temple structure date from earlier times, most of the murals are from the 18th and 19th centuries and few statues (with the notable exception of the Joyo Sakyamuni) are older than the 1980's. The temple was sacked several times during Mongol incursions but its worst treatment has been at the hands of the Chinese since their occupation of Tibet in 1959.

The sacred image of Jowo Sakyamuni (also called Yishinorbu or The Wish-Fulfilling Gem) is the most venerated and beautiful image in all Tibet. Housed in the Jowo Lhakhang shrine (on the ground floor of the Jokhang), the statue is 1.5 meters tall, cast from precious metals, and decorated with glittering jewels. Traditionally believed to have been crafted during the Buddha's life by the celestial artist, Visvakaram with the guidance of the god Indra, the Jowo Sakyamuni statue originally belonged to the king of Magadha (Bengal, India) who gave it to Wencheng's father, the king of the Tang Empire in China.

The Jokhang is the most celebrated temple in Tibet. Because the temple is not controlled by a particular sect of Tibetan Buddhism it attracts adherents of all the sects as well as followers of Bon-Po, Tibet's indigenous religion. Three pilgrimage circuits exist in Lhasa, each directing pilgrims to the Jowo Sakyamuni statue: the Lingkhor, which encircles the city’s sacred district; the Barkhor, which encloses the Jokhang temple; and the Nangkhor, a ritual corridor inside the Jokhang. Every day throughout the year hundreds of pilgrims circumambulate each of these three circuits. Some pilgrims will cover the entire distance by prostrating every few feet, and others will walk slowly, chanting sacred mantras and spinning hand-held prayer wheels. For more than a thousand years millions of pilgrims have trod these sacred paths with devotion in their hearts; this cumulative focusing of intention and love has charged the Jokhang with an enormously powerful field of sanctity.

For more detailed information on the Jokhang temple and other sacred sites in Tibet, consult The Tibet Guide, by Victor Chan. 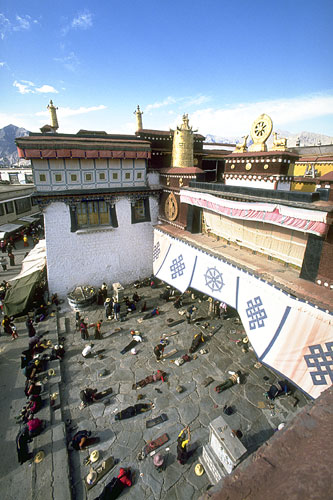 (Kelly, Thomas and Carroll Dunham and Ian Baker; Tibet: Reflections from the Wheel of Life; Abbeville Press; New York; 1993)... For Tibetans, pilgrimage refers to the journey from ignorance to enlightenment, from self-centeredness and materialistic preoccupations to a deep sense of the relativity and interconnectedness of all life. The Tibetan word for pilgrimage, neykhor, means “to circle around a sacred place,” for the goal of pilgrimage is less to reach a particular destination than to transcend through inspired travel the attachments and habits of inattention that restrict awareness of a larger reality... By traveling to sacred sites, Tibetans are brought into living contact with the icons and energies of Tantric Buddhism. The neys, or sacred sites themselves, through their geological features and the narratives of transformation attached to them, continually remind pilgrims of the liberating power of the Tantric Buddhist tradition... Over time pilgrimage guidebooks were written, giving instructions to pilgrims visiting the holy sites and accounts of their history and significance. These guidebooks, neyigs, empowered Tibet and its people with a sacred geography, a narrated vision of the world ordered and transformed through Buddhist magic and metaphysics.

(Dharma Publishing; Ancient Tibet: Research Materials from The Yeshe De Project; Dharma Publishing; Berkeley, California; 1986)…….Other prehistoric sites in Tibet include a number of locations where large stones, known as megaliths, have been set in the ground in circular or square arrangements. Megaliths have been found near Rwa-sgrengs and Sa-skya in central Tibet, and in the far west at sPu, Shab-dge-sdings, gZhi-sde-mkhar, and Byi’u near Ma-pham lake. Close to Pang-gong lake in the northwest are eighteen parallel rows of standing stones aligned in an east-west fashion with circles of stones arranged at the end of each row. In western gTsang at Sa-dga’ is a large grey stone slab surrounded by pillars of white quartz. Near Dang-ra lake are also large standing stones encircled by slabs, as well as sites that appear to be ancient square tombs. Western scholars have suggested that these may be tombs or burial sites or possibly sacred arenas of some kind.