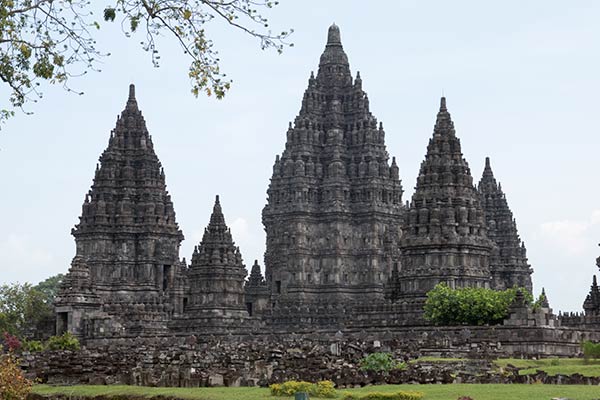 
Located 11 miles (17 kilometers) northeast of the city of Yogyakarta in Central Java, Prambanan is the largest Hindu temple in Indonesia. Also called Candi Prambanan or Candi Rara Jonggrang, the temple was constructed in the mid-9th century and dedicated to the Trimurti, the expression of God as the Creator (Brahma), the Preserver (Vishnu) and the Destroyer (Shiva). Its original name was Shiva-grha (the House of Shiva) or Shiva-laya (the Realm of Shiva) and its form was designed to symbolize Mt. Meru, the legendary holy mountain and abode of Hindu gods. The ground plan of Prambanan follows the Hindu system of Vastu Shastra, which literally translates as "science of architecture" and is laid out according to a mandala, or geometric pattern that represents a microcosm of the universe.

The temple complex consists of three zones, each of which is surrounded by a wall: an inner and most holy zone containing eight main temples and eight smaller shrines, each of which have been reconstructed; a middle zone containing 224 small pervara temples of which only two have been reconstructed; and an outer zone without temples, where the very large number of temple authorities and priests would have lived. The most prominent temple, dedicated to Shiva, rises to 154 feet (47 meters) and has four chambers in the cardinal directions. The eastern chamber contains a ten-foot statue of Shiva, the north chamber has a statue of Shiva's consort Durga Mahisasuramardini depicting Durga as the slayer of the Bull demon, the west chamber houses a statue of Shiva's son Ganesh, and the south is occupied by Shiva's teacher, the sage Agastya. The temple is adorned with panels of bas-relief sculptures telling the story of the Hindu epic the Ramayana and the Bhagavata Purana. 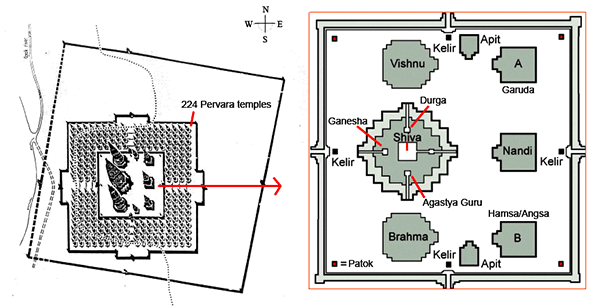 The temple was first built around 850 CE by Rakai Pikatan and expanded extensively by King Lokapala of the Sanjaya Dynasty. Historians suggest that the construction of Prambanan was probably meant to memorialize the return to power of the Hindu Sanjaya Dynasty in Central Java after almost a century of domination by the Buddhist Sailendra Dynasty. In the 930's, following state political turmoil and the volcanic eruption of nearby Mt. Merapi, the royal court was transferred to East Java by Mpu Sindok, who established the Isyana Dynasty. This marked the beginning of the decline of Prambanan. It was later abandoned, scores of trees grew amidst its soaring stone towers, and many temples collapsed during a major earthquake in the 16th century. Although the temple ceased to be an important center of worship and pilgrimage, the ruins were still recognizable and known to the local Javanese people.

Prambanan was rediscovered in 1733 by C.A. Lons, a Dutch explorer. The first efforts to reveal the full extent of the temple complex were done in 1885 and 1918, though looting became common with Dutch residents adorning their gardens with priceless statues and local people taking foundation stones to use as construction material. Archaeological restorations were conducted in 1937, 1978 and 1982, and continue to this day. Given the size of the temple complex, the Indonesian government decided to rebuild shrines only if at least 75% of their original masonry was available. Most of the smaller shrines are now visible only in their foundations, with no plans for their reconstruction. In 1991, the entire site was designated as a Unesco World Heritage Site. As of 2009, the interior of most of the temples remains off-limits for safety reasons. 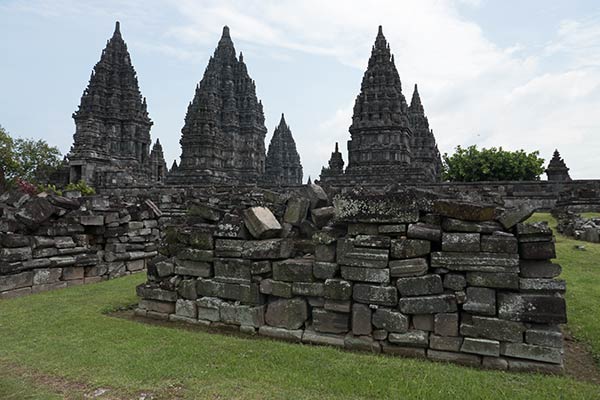 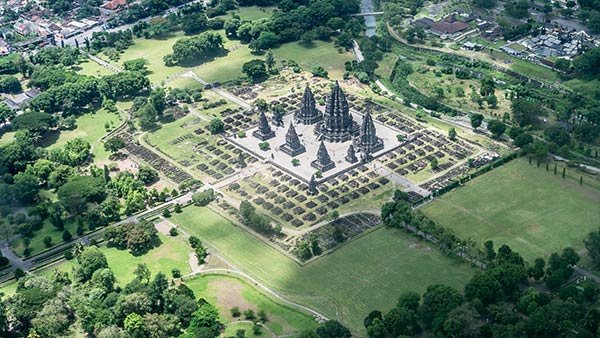 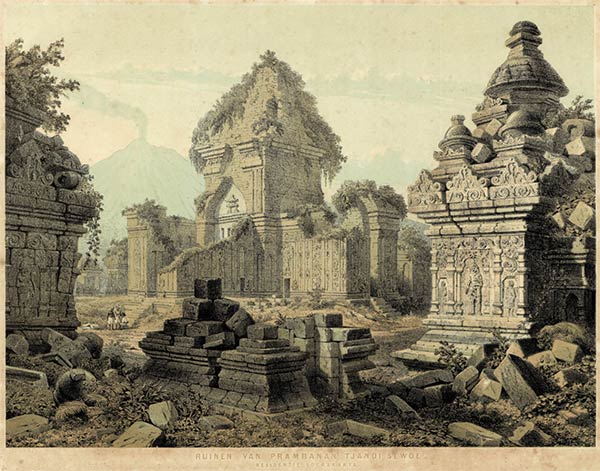 Ruins of Prambanan Temple with volcanic Mt. Merapi in the distance, 1852